A Brief Introduction to the Ancient Roman Clothing and Attire

Finding influence from the Ancient Greeks, Roman clothing went through many other styles from across the empire. Every piece of clothing worn by the people had a specific meaning, a message, behind it.

Finding influence from the Ancient Greeks, Roman clothing went through many other styles from across the empire. Every piece of clothing worn by the people had a specific meaning, a message, behind it.

They are a Class Apart

There was always special attention paid to clothing between the wealthy Romans and the poor, as the former would follow the latest trends of the time. Their clothes would be designed and marked to depict their social status.

The Romans were known to have always used several types of material for creating the clothes. This included wool, linen, silk, and hemp with certain researches revealing that even clothes made with cotton were popular. The ancient Roman attire was well-structured.

Let us take a look at what the men, women, and children used to wear, and how their attire was a clear indication of their social status.

With mostly coarse needles, stitching or sewing clothes was not a common practice. Instead, almost all clothing were held together with either fastenings, such as broaches and clasps. Men would generally wear one of the two garments―tunic or tunica and toga.

Knee-length tunics were worn by men which is quite similar to a chiton worn by the Greeks. These were either sleeveless or short-sleeved, and were made with 2 pieces of undyed woolen cloths stitched together on either side. The arms were left open at the top of the tunics.

If a man was seen wearing a tunic with a purple stripe on it, called a clavus, it would indicate that he’s a member of a particular order. A senator would wear a latus clavus that had a broad vertical purple strip in the center of the tunic. As for an equestrian, the tunic, called the angustus clavus, would have 2 narrow vertical purple stripes on either side. As for the elite class, they would wear long-sleeved tunic, called the dalmatica, instead of a toga.

A toga is nothing but a 20-feet piece of cloth, made of woo, that was wrapped around the body. Only the free citizens of Rome could wear a toga as the foreigners and exiled citizens were not allowed to come out of their houses wearing one. However, later on, many would wear a simple tunic underneath along with a belt over the waist. Till the 2nd century BCE, only Roman men would wear them exclusively.

The quality of material used for the toga would determine a person’s status. For the upper class, men wore thin, naturally-colored wool togas whereas men belonging to the lower class had to wear togas made with either a coarse material or thin felt. Male children and magistrates for official ceremonies would wear a toga with purple border, known as the toga praetexta. Togas with a gold border, called the toga picta or toga palmata, was worn by generals for a civil ceremonies and religious rites. A trabea is a purple-colored toga that was worn by statues of deities and emperors. Saffron toga which was white with a purple band was worn by priests and priestesses, and by consuls during public festivals.

Unlike their male counterparts, women’s clothing did not have the similar style of class or wealth distinctions through their clothing. In actuality, the only difference was that women would wear a stola. There were only a few variations in fabric or colors as women would wear simple and unchanging clothes. Which is why, it was their hairstyles and jewelry that made them stand out in the crowd.

Women would wear fuller and longer, ankle-length tunics called the peplos and chiton. A peplos was made by partially sewing 2 pieces of rectangular fabric on either side. Women would pull the peplos over their heads and fasten it around the shoulders with pins and around the waist with a belt. As for the chiton, the 2 pieces of fabric would be sewn only at the top with room left for the armholes and head.

Depending on the width of the fabric, the length would be determined accordingly. The tunics can either be made from colored or lightweight fabric like linen or silk.

At the time of the marriage, a woman could then wear the stola which is a long, sleeveless tunic worn over another tunic. Being a symbol of marriage, a woman could publicly proclaim her respectability and support traditions. Female children would wear a tunic that was just below the knees or slightly lower with a belt around the waist. While going outside, she would wear another, slightly longer, tunic over the first one.

The pallium was a worn by both men and women (known as palla for women). It was a rectangular piece of colorful fabric, mostly wool or silk.

Worn by both men and women, paenula is a cloak with a hood that was worn during bad weather for protection. If this cloak was made from leather, it was called paenula scortae, and if it was made with heavy felt, the name would be paenula gausapina.

The sagum is a cloak that was worn by Roman soldiers and officers alike. A shorter version of sagum, called sagulum, was also worn that would reach till the hips.

The laena was a thick, round-shaped cloak that was folded twice at the shoulders as it was made with heavy fabric. 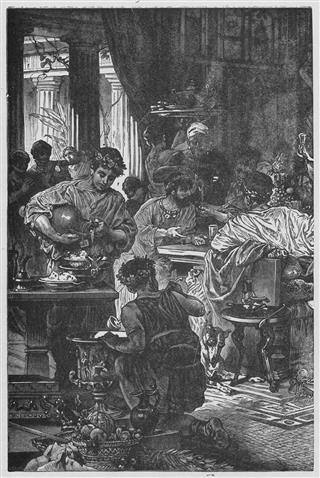 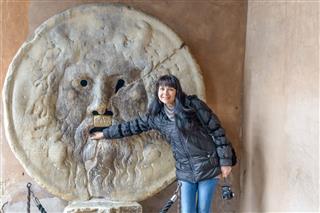 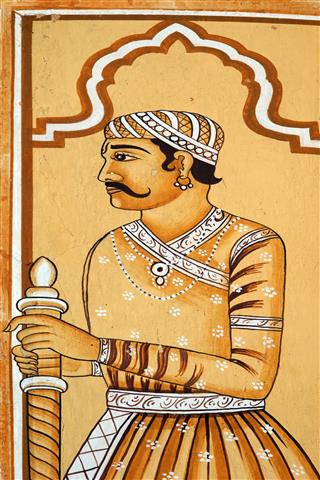