The Biggest and Most Sensational Diamond Heists in History

What's not to love about glittery diamonds? I would love to own lots of them, especially if they are intricately embedded in a necklace or ring. But since these rocks are way out of reach for most of us, an audacious and a quick way to possess them is to rob a bank. Here are a few incidents where people risked jail time to grab some of these gems.

Home / Uncategorized / The Biggest and Most Sensational Diamond Heists in History 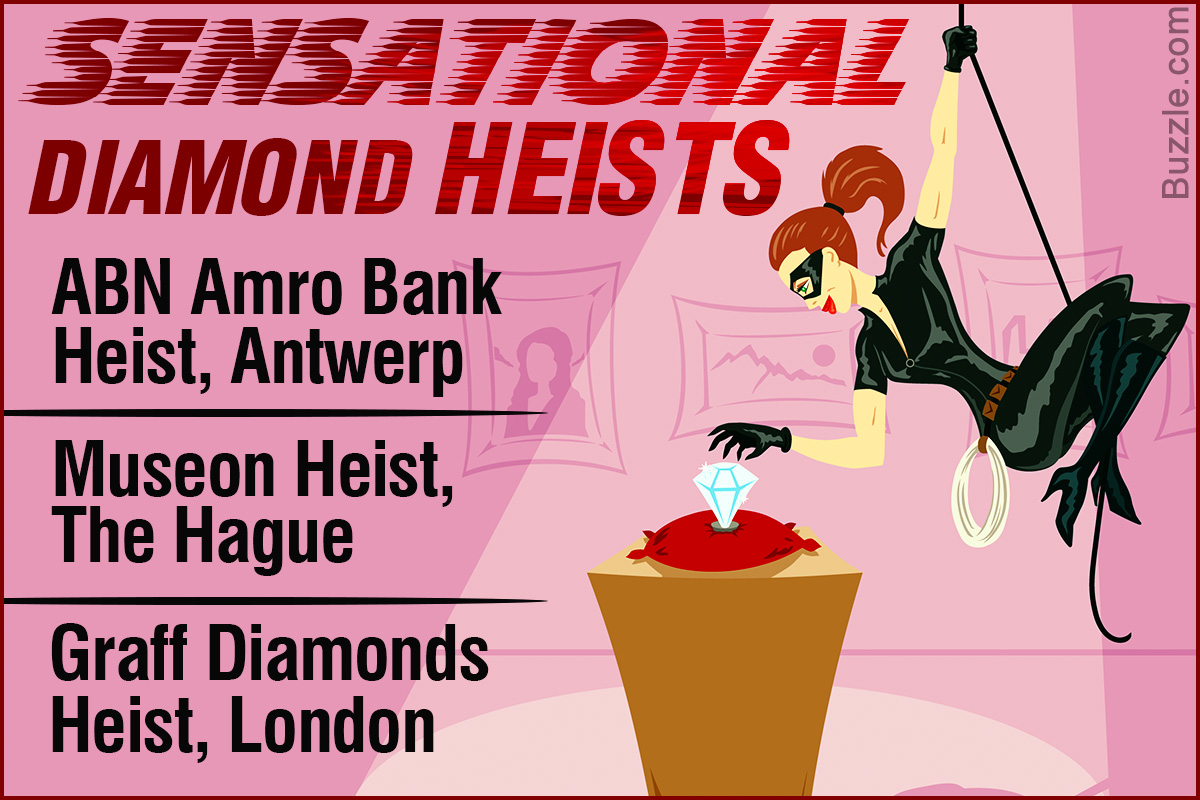 What’s not to love about glittery diamonds? I would love to own lots of them, especially if they are intricately embedded in a necklace or ring. But since these rocks are way out of reach for most of us, an audacious and a quick way to possess them is to rob a bank. Here are a few incidents where people risked jail time to grab some of these gems.

What not to do after pulling off a heist

If you have robbed a jewelry store without a mask, please do not go back there. Luisa Silverio (42) and Mildred ju Lugo (46) learned this lesson the hard way when they went back to the robbed store to shop. Unsurprisingly, the manager immediately recognized them from the surveillance cameras and police arrived to catch them.

In almost every heist movie, the police conclude that the crime committed was not random, but pre-planned and the perpetrators were pros. It makes me wonder how a heist or a diamond heist for that matter can be professionally done. As far as heists go, there seem to be three popular ways of stealing diamonds.

Here are some of the biggest and most brazen diamond heists that were carried out with apparent clockwork precision.
Note:The list given below is not in a chronological order.

When: 15-16 Feb, 2003
Estimated haul: Over $100 million worth of diamonds and other gems
Thieves: Leonardo Notarbartolo and four others
Caught: Four members; one never found
Diamond recovered: No

A heist worthy of a Hollywood’s attention, this one. What makes it so fascinating, is not just the $100 million diamond theft, but the number of security layers that the thieves overcame to finally get their hands on the loose diamonds. The police caught up to the perpetrators by pure dumb luck. The thieves, who called themselves La Scuola di Torino (The School of Turin), unwisely dumped the CCTV cameras that they stole from the robbery site, along with a half-eaten sandwich. The leader o

When: 18 Feb, 2013
Estimated haul: $50 million worth of diamonds
Thieves: A gang of eight people
Caught: 31 people arrested in a three-country sweep by police
Diamond recovered: Some of the loot recovered, along with large sum of money

The diamonds were supposed to be transported from Antwerp to Zurich. But before these diamonds could reach their destination, a gang of eight thieves dressed as police officers broke into the Swiss plane cargo where the diamonds were kept, and spirited away with the haul. It is said that the entire operation barely took about 5 minutes. The thieves were heavily armed, but they did not fire a single shot. It’s believed to be an inside job.

When: 5th Dec, 2008
Estimated haul: £70 million worth of jewelry including diamonds
Thieves: Four men, wore female clothing and wigs
Caught: Yes
Diamond recovered: Part of the loot, approximately £15 million of worth was discovered in a sewer in Paris

The robbers in drag, walked into the famed jewelry store and made off with the jewelry that was kept in the display boxes. They forced the customers and employees into the corner of a room and quickly escaped, without firing a single shot. The entire heist was over within 15 mins. These robbers are ex-soldiers and hail from Serbia. There are also rumors flying around that these men are a part of the notorious jewel thieves network called the Pink Panther.

When: 25th Feb, 2005
Estimated haul: $118 million
Thieves: Four men, wearing KLM (a major Dutch airline) uniforms
Caught: Several people have been detained by the police in connection with the heist
Diamond recovered: No

A stolen KLM truck and uniforms, and some guns. That’s what it took to hijack and rob a Schiphol Airport truck that was carrying uncut diamonds worth $118 million. The robbers forced the driver of the airport truck, out of the vehicle and made him lie down on the ground. Then, they jumped in the truck and drove off with the loot. Obviously, it turned to be an inside job; however, the truck’s cargo was never recovered.

When: 26th Nov, 1983
Estimated haul: Diamonds, gold and cash – worth £28 million
Thieves: Six men, headed by Brian Robinson and Mickey McAvoy
Caught: Most of the gang was caught by the police and sent to prison
Diamond recovered: Unknown

Six thieves wanted to steal a mere £3 million in cash. However, they found a pleasant surprise when they broke into the Brink’s-MAT warehouse at Heathrow Airport. They found a whopping 6,800 gold bars along with cut and uncut diamonds which were worth £100,000. As they realized that the loot, which included gold bullions, will require a sturdier vehicle, they quickly put an improvised plan in action. Some of the members went out to seek another getaway vehicle. This feat of a robbery took place with the help of inside information. However, the juggernaut haul soon proved to be headache for the robbers as they didn’t know how to smelt the gold.

Smash and grab. That was the style which was adopted by the robbers of a jewelry store in Carlton Hotel. Three armed men entered the premises of the store and started firing their weapons in the air. As the customers and employees of the jewelry store panicked, the robbers quickly grabbed whatever jewelry they could find and dashed for the door. They were never seen again. Later, the police found that the shots fired by the criminals were blanks.

When: December, 2002
Estimated haul: From $12 million to priceless
Thieves: Unknown number of men/women
Caught: No
Diamond recovered: No

Museon, the museum of science in The Hague had a exhibition, where they were educating the public how to spot fake diamonds. Apparently, the thieves didn’t need to be educated. Without showing up in the video footage and alerting motion sensors, they managed the impossible feat of emptying display cases where the jewelry pieces were kept. Except a broken window and disappearance of priceless jewelry, there were no other signs of robbery that took place.

This is a very unusual story in the history of diamond heists. The diamond thief used the best weapon known to mankind: his personal charm. Calling himself Carlos Hector Flomenbaum and pretending to be a successful businessman, the conman became friendly with the staff of ABN Amro Bank in Antwerp, so much so that they gave him the original key which helped him gain access to the VIP security vault. The conman, believed to be around 6 ft. tall and in his 50s, is still at large.

The timing was perfect, just like Tourbillon watch. The heist occurred on a Sunday morning before any of the clients arrived at the Damiani showroom. The robbers drilled a hole into the basement of the jewelry store, from an empty cellar of the neighboring building, and made their way to the showroom. After tying up the staff, the gang took no time to disappear with the loot.

Though Graff Diamonds have gained reputation of being “specialists in getting robbed” due to a string of jewelry heists, this robbery still came as a shock to the owners of the store. The robbery turned violent when the criminals fired shots and held the employees hostage, in order to make a safe escape. The entire heist was meticulously planned, with a series of getaway cars. The robbery was linked to a crime syndicate. Even though the four men involved in the crime were arrested by the cops, the jewels were never found. Rumor has it that these gems were sold in the black markets of Far East.

What sets apart a diamond heist from run-of-the-mill theft? Is it the dance around the laser beams or rappel down a building to make the ultimate escape? Perhaps, it’s about the fantasy of thwarting technology and ultimately getting your hands on the sparkling diamonds. After all, diamonds are forever.