Did You Know?
The Canadian national flag is commonly known as the Maple Leaf, due to the prominent design motif. It is also called l'Unifolié in French, Canada's second most spoken language, which stands for 'the one-leafed'.
Canada is the second largest country in the World, and the largest in the Western Hemisphere. For a large part of its history, it was a French and British colony, the effects of which are obvious in the modern society of Canada even today.
The current design of the national flag of Canada was adopted on February 15, 1965, but one with a slightly different design of the maple leaf had been in use since a year earlier. In Canada, February 15 is celebrated as National Flag of Canada Day. The Canadian national flag is unusual in the sense that there is no legal dictum for how it should be used. It can be flown by any citizen or government building in Canada on any day, as long as it is not inferior to any other flag.
The Canadian national flag is set in a 1:2 design, i.e., the width is twice that the height. It has three vertical bands, with the ratio of their width being 1:2:1, i.e., the central band is twice as wide as the other two. The usual ratio in triband flags is 1:1:1. This unusual design of the central band is known in vexillology as the Canadian Pale.
History
Canada's first flag was the flag of England, since it was first claimed by British explorers. Later on, the French installed the French coat of arms as the Canadian flag. The French flag or some variant of it was used as the Canadian flag in the years to come.

After the formation of the Canadian Confederation in 1867, various versions of the Canadian Red Ensign were used as the national flag of Canada. The three prominent versions are given below, along with the period in which they were used. The Union Jack was also used before 1965, especially after Canada declared independence from the United Kingdom in 1931.

1957-1965
Development of the Modern Flag
The need for a Canadian flag completely distinct from that of the U.K. was felt during the Suez Crisis of 1956. The U.K. was one of the belligerents against the Egyptian Army, whereas the Canadian section of the peacekeeping force carried the Red Ensign, which contained the Union Jack. Canadian Prime Minister Lester Pearson, who won a Nobel Peace Prize for his role in brokering peace in the crisis, was the prime proponent of the change. His proposal was fiercely opposed by the opposition within the Government.

Another reason for bringing about a change was that the inhabitants of Quebec, a French-speaking province of Canada, were unhappy with the Union Jack being part of the national flag. Quebec was the power base for Pearson's Liberal party, whereas the rest of English-speaking Canada, led by opposition leader John Diefenbaker, supported maintaining the existing design.

Eventually, Pearson introduced a potential design, which led to several weeks of debate. The design represented Canada's motto, Sea to Sea, in the form of blue borders at either sides, with Canada's symbol, the maple leaf, being stationed in a triumvirate in the middle. This design is shown below:

Pearson's proposed design
The present design was conceived by Colonel George Stanley, using the flag of the Royal Military College of Canada as an inspiration for the triband design. Stanley also noted that the new flag could contain neither the British Union Jack nor the French fleur-de-lis. The meaning of this design is that the red color comes from the red in England's flag, the white comes from historic royal symbolism in France, and the maple leaf is a symbol of Canada. The original design of the flag is given below:

First design of the current national flag of Canada
Eventually, the design was modified to the present version, as given below:

Current national flag of Canada
The design was passed by the House of Commons on December 15, 1964, and proclaimed by Elizabeth II as the new national flag of Canada on January 28, 1965. It was inaugurated, as mentioned before, on February 15, 1965, by lowering the Red Ensign on Parliament Hill and replacing it with the new flag.

An unofficial, alternative flag was developed to better include the French-speaking population of Canada. This was done since the red and white in the Canadian flag could be confused as being taken from the English flag, even though the white was taken from French royal symbols. The alternative flag includes the blue from Quebec's provincial flag to clearly indicate the inclusion of the French-speaking population. This flag does not officially represent Canada in any way. 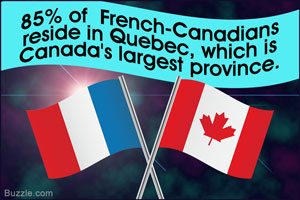