Do You Know These Famous People from Nevada?

Nevada is well known for the fact that the city of Las Vegas, famous for its casinos, gambling, night life and partying, is located in this state. Nevada state is also the birthplace of many talented personalities and professionals of the United States, some of which are discussed below.

Home / Uncategorized / Do You Know These Famous People from Nevada? 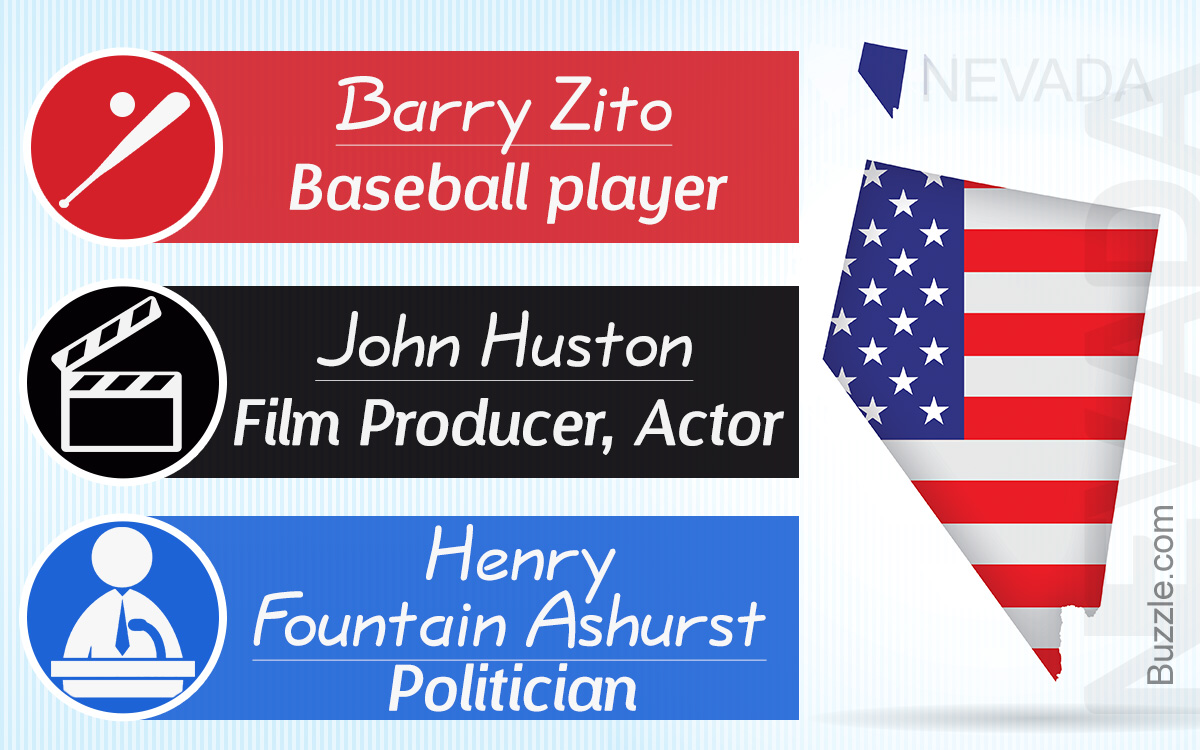 Nevada is well known for the fact that the city of Las Vegas, famous for its casinos, gambling, night life and partying, is located in this state. Nevada state is also the birthplace of many talented personalities and professionals of the United States, some of which are discussed below.

Nevada is located in the western region of the United States. Carson City is the capital of Nevada, and Las Vegas, its largest city. It’s also called the ‘Silver State’ due to the large number of silver deposits that were discovered. It is a hometown to many famous personalities of the United States.

Most Famous People from Nevada

Pat Nixon was the wife of Richard Nixon, the 37th President of the United States of America. She was the First Lady from 1969 to 1974. She was born in Nevada, but later shifted to Los Angeles and then California, where she completed her graduation. She married Richard Nixon on 21st June, 1940, and assisted him in his presidential election campaigns. She was diagnosed with lung cancer in the early 1990s, and died aged 81, in 1993.

Jim Gibbons is the 28th Governor of Nevada state. He was born on 16th December, 1944 in Sparks, Nevada. He’s also the former member of the ‘United States House of Representatives’ from 1997 to 2006. He served the US Air Force during the Vietnam War, from 1967-1971. He completed graduation from the US Air Force Air Command and Staff College and the Air War College. In 1975, he joined the Nevada Air National Guard and worked as a Vice-Commander from 1990 to 1996, and later during the first Gulf War. During his military career, he received nineteen service medals.

Edna Purviance was an American actress who was born in Paradise Valley, Nevada, on 21st October, 1895. She is well-known as Charlie Chaplin’s girl who worked as a leading lady, in more than 30 of his films, over a span of eight years. She was romantically involved in a relationship with Charlie Chaplin, but eventually married John Squire, an airline pilot. On 13th January, 1958, she died of cancer.

Jack Kramer is a champion US tennis player of the 1940s, who was born in Las Vegas, Nevada on 1st August, 1921. He held the ‘World No. 1’ title for a number of years. He is also considered to be one of the greatest tennis players of all time. He was the first executive director of the Association of Tennis Professionals (ATP), which was founded in 1972. He attended Rollins College in Winter Park, Florida, and participated in its tennis sessions in the 1941-1942 seasons. In 1968, he was admitted as a member in the International Tennis Hall of Fame in Newport, Rhode Island.

Kurt Busch was born on 4th August, 1978, in Las Vegas, Nevada. He is a professional race car driver. He drives a Miller Lite Dodge in the NASCAR Sprint Cup Series. He is the elder brother of Kyle Busch who is also a professional race car driver. He entered racing world at the age of 22. He married Eva Bryan in Virginia, and both are currently living in North Carolina.

If renowned personalities from Nevada are to be thought of, how can we miss Wayne Newton? Born on 3rd April 1942, he is a popular singer and actor. He is also referred to as The Midnight Idol, Mr. Entertainment, and Mr. Las Vegas; owing to the fact that he has done thousands of shows in Las Vegas alone. Wayne Newton took up playing the piano and guitar at a very young age. Due to his contribution to the entertainment industry, he has even received many ‘Entertainer of the Year’ awards. Other recognitions include ‘Native American Entertainer of the Year’ and ‘Lifetime Achievement Award’ awards.

He was a famous businessman who is believed to be the founder of United Parcel Service (UPS) company. Born in Pick Handle Gulch, Nevada, he got into the business industry at 19 years of age. In 1907, he started his first business concern and named it American Messenger Company. In just about six years, his company collaborated with Evert McCabe’s Motorcycle Messengers to carry out the delivery business which was eventually named United Parcel Service. He passed away in 1983, before which he also established the Annie E. Casey Foundation and Casey Family Programs.

Below is a list of some other known personalities in the state of Nevada.

Other Famous Personalities from Nevada

These is just a small list of famous people born in Nevada, there are many more Nevadans who have also contributed to the economy, entertainment industry, and sports in the United States of America. Though the above-mentioned people were born in Nevada, their work extends widely to other states.