Digging the Origins: The History of Carpetbaggers and Scalawags

America has undergone sea change in the political and economical realms over a period of many years. It has borne people like Lincoln, who are still remembered for their outstanding contributions in the formation of new America. But it is also known to have owned an array of carpetbaggers and scalawags. This Historyplex post attempts to state the origin of the terms.

Home / Uncategorized / Digging the Origins: The History of Carpetbaggers and Scalawags 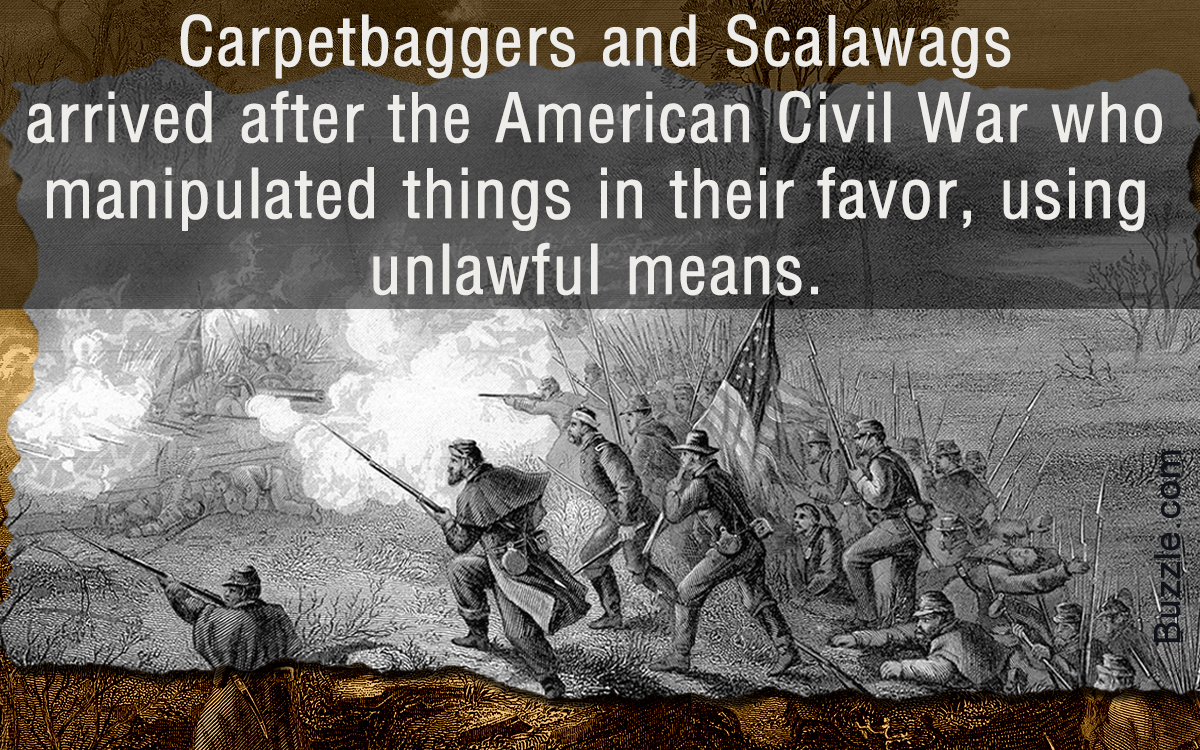 America has undergone sea change in the political and economical realms over a period of many years. It has borne people like Lincoln, who are still remembered for their outstanding contributions in the formation of new America. But it is also known to have owned an array of carpetbaggers and scalawags. This Historyplex post attempts to state the origin of the terms.

The Carpetbaggers and Scalawags were a bunch of educated masses who comprised the “middle class” of the then-American society.

Like in most cases, there are always present a group of people who feel no qualms to flip sides from one group the other as the power changes. They are usually referred to as traitors or cheats. The meaning of the terms carpetbaggers and scalawags is closely associated with this feature of humans. In fact, both these terms appeared at a time when America was in deep crisis. There was stark distinction between the northern and southern parts of the country, and there were futile attempts being made to protect the honor of the Afro-Americans, and the overpowering attempts to edge their basic rights as citizens. This was also the time when the once-detached southern part was brought under the big umbrella of the Union. In the wake of this turmoil, there were groups of people who left no stone unturned to beget the sole beneficiaries of wealth, power, and luxury. These terminologies were used in sheer contempt and disregard for the unacceptable conduct of those people. Before we try to understand these terminologies in more detail, it is necessary to know about the factors that ignited the occurrence of these people―the factors being the American Civil War and the following reconstruction regime.

► The US had to pass through the dark tunnels of slavery, before the light of democracy dawned over it. American Civil War is the reference point that led to the mighty change in the American history.

► There appeared in the face of America two distinct divisions, after seven slave states in the south declared their separation from the Union. After the commencement of the war, these seven states were later joined by four other states. These 11 states that denounced the Union were the South.

► They formed the Confederate States of America.

► The other countries who were on the other side were referred to as the ‘North’ or the Union. There were 23 states in the North.

► The Confederate States relied heavily on the lucrative cotton, more popular as “King Cotton”. They were confident that the demand for cotton would fetch them recognition and contribute to their sustenance, all together. However, this was far from the truth.

► In April 1861, Fort Sumter was bombarded, and thus began the mighty and bloody war that elapsed through four years.

► There were many attributing factors for the outbreak of the Civil War in America, but primary amongst all was slavery and the escalating differing opinions between the north and the south.

► It is worth noting that prior to the war, the North had taken major economic reforms in investment. They had adopted new economical ventures, as opposed to the South, who till then were banking upon slavery, which happened to be the backbone of their economy, apart from cotton.

► The North appeared to be more powerful to the south in all respects, ranging from finances, armory, inventory, communication network, soldiers, and even citizens.

► With irreversible losses to life and property, the war ended in 1865, leaving the Confederate states disillusioned and defeated.

► Like a silver lining in the cloud, the American Civil War set the roots of Reconstruction. It also paved the way for the 13th Amendment in December, 1865, which abolished slavery in America forever.

► Reconstruction is the activity that attempted to include the estranged 11 nations of the south who had separated from the Union, leading to the Civil War.

► Under the supervision of President Andrew Johnson, the entire process took up new strategies and methods, amidst ample hindrances from all squares.

► But according to the Presidential Reconstruction Program under the guidance of Johnson, the southern states introduced a set of laws that were to be adhered to by the African-Americans. This set of laws was named the Black Codes. These codes aimed to curb the freedom of the African-Americans. They also ensured their availability as laborers at debt, or low wages. On the other side, the Radical Republicans endorsed the idea that the blacks were the equals of the whites, and are entitled to enjoy the same benefits by virtue of being American citizens.

► At around 1870, the once-separated southern states were brought under the Union, once again. Thus, the first purpose of reconstruction was served.

► The fifth, thirteenth, and the fourteenth amendments set new goals. The African-Americans were accepted to be the rightful citizens, acquired the right to vote, and were no longer slaves. These were the results of the three amendments.

DIFFERENCE BETWEEN CARPETBAGGERS AND SCALAWAGS

❖ The term refers to any person from the north, who moved to the south during reconstruction and post Civil War.

❖ They aimed to be a part of the political scenario, with a view to amass personal economic gains.

❖ The word is used as a word of contempt and resentment.

❖ It is inspired by the act of transporting one’s luggage and belongings in bags; made from the remains of old carpets.

❖ Their motive to join hands with the Republicans of south was bleak.

❖ The term refers to a white southerner who supported the Carpetbaggers and who disowned the southern values as such.

❖ They heartily accepted the process of reconstruction and the Republican party.

❖ The word was heavily used by the Democrats of the south. It also suggests derogatory behavior. To cut it short, the term refers to a troublemaker.

❖ The word explains the Scalawags as those who cooperated with the Carpetbaggers for gains.

Well, though the concept of these unique terminologies appeared at the time of the American Civil War, neither does it limit the significance of the terms in that era, nor to that geographical location either. These terminologies are more than simply words. They are, in fact, a description of human attitude and values that are prevalent in all the classes of a civilized society.