Incredibly Interesting Facts About the Mir Diamond Mine

The Mir diamond mine is one of the prestigious treasures of Russia, which has supplied huge amount of diamonds when it was active. Find out some interesting facts about this open-pit diamond mine.

Home / Uncategorized / Incredibly Interesting Facts About the Mir Diamond Mine 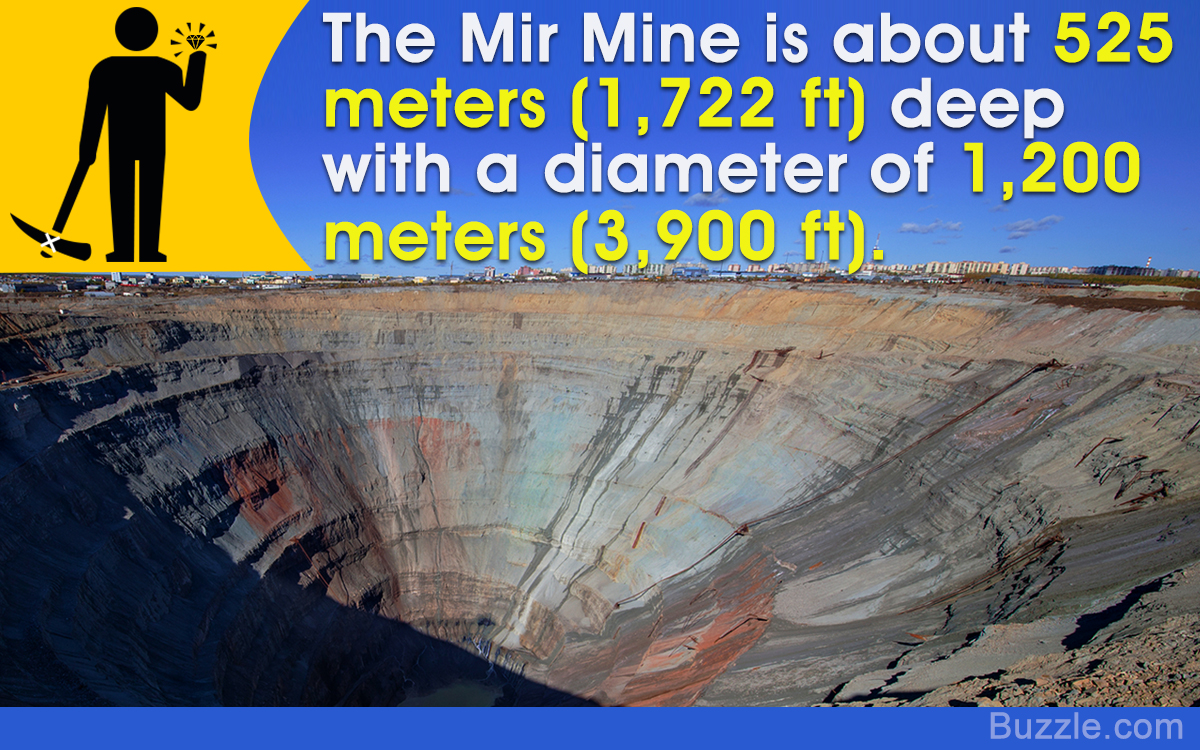 The Mir diamond mine is one of the prestigious treasures of Russia, which has supplied huge amount of diamonds when it was active. Find out some interesting facts about this open-pit diamond mine.

I am smoking the pipe of peace. This was the first coded message sent by a geologist, Yuri Khabardin in 1955, when he discovered and tested a diamond pipe in Mirny.

Located in the city of Mirny, Eastern Siberia (Russia), the Mir or the Mirny Mines (Mirny in Russian means “peaceful”) is known as one among the world’s largest man-made holes. Interestingly, some refer to it as the ‘Navel of the Earth’.

Owing to the huge size of this man-made hole, there were many reported incidents of helicopters crashing into the mine. Most of the helicopters passing over the mine would get sucked in due to the tremendous power of the downward air flow in the hole. However, the good news is that this open pit has now been declared a no-fly zone for safety reasons.

✦ After the World War II, Joseph Stalin, the General Secretary (Central Committee of the Communist Party of the Soviet Union), desired to retain Soviet independence and spent more time for expeditions. That was the time when the Mir Mine was found and constructed.

✦ On June 13, 1955, a few Soviet geologists — Ekaterina Elagina, Yuri Khabardin, and Viktor Avdeenko with some more associates found traces of the volcanic rock known as kimberlite, which is mostly associated with diamonds.

✦ This was the first success in Russia for the search of kimberlite after various failed expeditions in the 1940s and 1950s. In 1957, Yuri Khabardin was given one of the prestigious awards in the Soviet Union — the Lenin Prize — for his discovery.

✦ After the operations of the mine started, the seven months of winter in Siberia froze the ground and made life difficult for the mine workers. The low temperature made the car tires and steel to shatter and the oil to freeze.

✦ The mine workers had no choice but to use jet engines to dig out the permafrost and use a dynamite to access the underlying kimberlite pipes. The workers had to cover the whole mine every night for preventing the machinery from freezing.

✦ The building around it had to be raised on piles to avoid the risk of them sinking. The main processing diamond plant had to be built 20 km away from the mine on a better ground. In spite of the tough conditions, the Mir mine served for more than a period of forty-five years providing standard quality, beautiful diamonds.

Legend of the Diamonds

✦ During the 1960s, the Mir mine was producing almost 10,000,000 carats of diamond per year out of which 20 percent was considered to be of gem quality. The upper layers of the mine gave high content of diamond than the pit bottom.

✦ After a decade of its discovery, Russia become the third largest producer of diamonds in the industry, showcasing the finest quality ones.

✦ When the mine was in full operation, it produced around 10 million carats of diamond per year. The enormous supply of diamonds by Mir mine was a mystery for De Beers, and it was increasingly becoming a threat to them.

✦ In order to keep their control over the diamond market, De Beers had to purchase huge shipments of the Russian diamonds and maintain the market price.

✦ Soon De Beers requested a visit to the mine. However, when the delegates got there, they were tricked by the mine officials, who allowed them to be in the mine just for 20 minutes. This was done so that no important information could be obtained from the mine in such a short span of time.

✦ In the 1990s, when the USSR collapsed, the Mir Mine was operated by Sakha diamond company for a certain period of time, earning profits of more than $600 million diamond sales per year. Later, they were operated by Alrosa.

Since its inception, the Mir mine has been producing a huge amount of diamond carats per year. Even when it has been shut down, it still holds trillions of carats, which can provide the world with diamonds for more than a millennium.