A Look at These Mummification Steps Will Make Your Skin Crawl

Of the various facets of the fascinating history of ancient Egypt, the creation of mummies is by far the most interesting. As you go through this information on the steps of mummification, you will get a rough idea about the process involved.

Of the various facets of the fascinating history of ancient Egypt, the creation of mummies is by far the most interesting. As you go through this information on the steps of mummification, you will get a rough idea about the process involved.

Initially, early Egyptians used to bury their dead in small pits, wherein the bodies would get dehydrated and natural mummies were formed. With time, the rituals changed, and they started to cremate the dead in crude tombs. While that was a novice method, problems would arise when these bodies were mutilated by wild animals in the desert. As a solution for this, it was decided to put the bodies in coffins. Soon, however, they realized that the dead bodies in coffins would decay very soon.

The belief in afterlife was prominent in ancient Egypt; so, the problem of decaying bodies was not taken lightly. Eventually, they came up with the idea of preserving bodies to tackle this problem and thus, came into existence the process of mummification. The steps involved kept changing with time, as new rituals and methods to preserve bodies were introduced.

The basic steps of the mummification process in ancient Egypt were categorized into two parts: (i) embalming and (ii) wrapping the dead. Given below are the step by step details of each of these two parts.

Next, the mummy was placed in the first coffin, and then the first coffin was placed in the second one. This was followed by various ceremonies, including the actual funeral and the opening of the mouth ceremony, which―according to the Egyptians―helped the dead to breathe and speak. The mummy was then placed within the sarcophagus―a stone coffin with carvings on it and kept in the tomb, which was its final resting place.

That traced the journey of a dead body from the Ibu―the place of purification, to the tomb―the final resting place. The process of mummification is an apt evidence of how advanced the Egyptian civilization was. Their technique of preserving bodies was highly efficient, and the Egyptian mummies existing in several pyramids across Egypt speak volumes about the same. 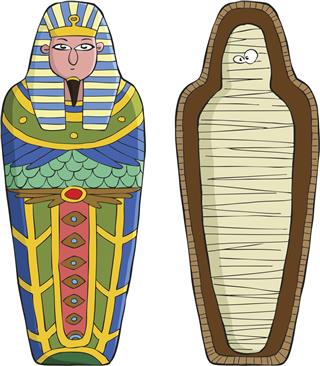