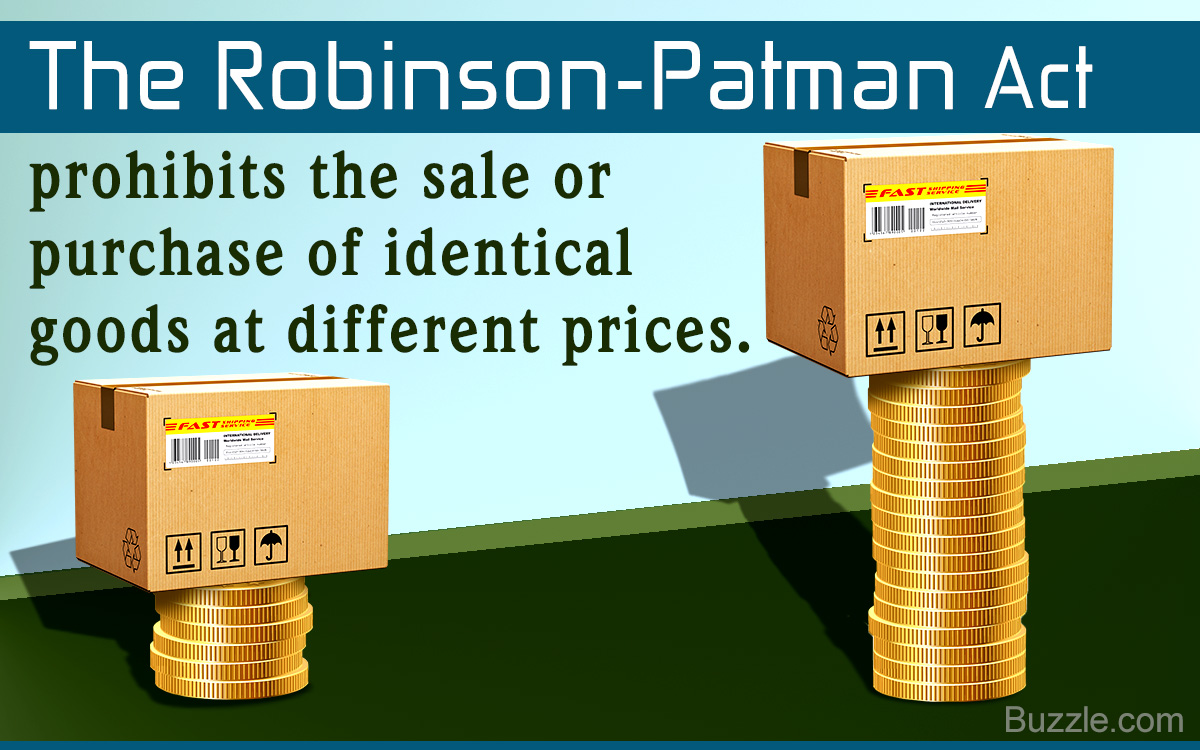 Over 20 US states have price discrimination statutes which are similar to the Robinson-Patman Act.

The Robinson-Patman Act of 1936 is a United States federal law, which is one of the various antitrust laws prevalent. These antitrust laws are concerned with protecting and maintaining a healthy competition in the market, and to support consumer rights. The Robinson-Patman act was passed as an amendment to the previous Clayton Antitrust Act of 1914, to overcome its shortcomings. The main purpose of this act is to prohibit price discrimination of commodities, which tends to edge out competitors from the market.

‘Price discrimination’ is a term used to describe a situation where goods of the same type and quantity are sold to two or more different purchasers at different prices. This activity is generally done to draw buyers towards that supplier, thus causing a loss to the other competing suppliers. Sometimes, such discounted prices are ‘induced’ by large buyers like chain stores, which may cause losses to smaller retailers.

So, the Robinson-Patman Act was passed to widen the scope of the antitrust laws, and make both, the buyers and sellers of unfairly-priced goods liable to be tried under the provisions of the act. From the time that the act was passed, it had to face pressure from industry groups, because of which it was not enforced for a period in the 1960s and ’70s, until the Federal Trade Commission (FTC) revived its use in the 1980s.

In the backdrop of the Great Depression in America, many large chain stores began sprouting all over the country. Taking advantage of their large numbers and high-quantity purchases, these stores began targeting sellers by offering them discounted goods and other allowances, which began to force the smaller stores out of business. The previous antitrust act, the Clayton Act, did not have any provisions dealing with discriminatory pricing based on purchases of more quantity, which made it ineffective in such cases. After an agitation by smaller retailers, Congress passed the Robinson-Patman Act in 1936 to support the Clayton Act.

What is the Robinson-Patman Act?

The Robinson-Patman Act is an Antitrust act that aims to check discriminatory pricing offered to larger buyers, intending to push the competitors out of business. The act applies not only to the seller who has offered a discounted price, but also to the buyer who made the purchase at this lower price. The act is only applicable to commodities and products, and not to services such as electricity and telecommunication. The main purpose of the act is to maintain competition in the market by helping smaller retailers make purchases at the same prices as the larger retailers. In short, no individual or business can charge different prices for the same goods.

Conditions Laid Down by the Act

★ This act applies only if the discriminatory prices are levied on commodities, and not services. It applies only to purchases and not leases.

★ The purchases must be of the same type and quantity of commodities.

★ The act requires a minimum of two sales of the same type and quantity of goods by the same manufacturer to two or more different purchasers at different prices.

★ The grade and quality of each commodity must be the same.

★ One of the sales should be across an American state boundary, but all sales should have occurred within the country.

★ The intent of the defendant to cause injury to competitors should be proven.

★ The victim of the discrimination should have suffered actual business loss, which should fall within the purview of antitrust injury.

★ The sales should be restricted to a specific time interval.

Important Aspects of the Act

✤ The Robinson-Patman Act is enforced by the Federal Trade Commission (FTC) in collaboration with the US Department of Justice.

✤ The act controls the sale of goods of the same type and quantity at different prices to different purchasers, by the supplier.

✤ The act also controls the purchase of goods of the same type and quantity, at a discounted price by any purchaser.

✤ The act makes it illegal for any supplier or purchaser to give or accept any brokerage, commission, or any other compensation, except in return of some service which relates to the sale or purchase of goods.

✤ It prohibits suppliers from providing any allowances to the buyer, to make the resale of the goods easier, unless these allowances are available to all the buyers.

✤ Private businesses can sue the defaulting companies for an amount up to a triple of the discriminating prices, if they tend to suffer competition losses because of discriminatory pricing.

✤ The act allows the supplier to give certain discounts to those purchasers who have performed some marketing task for the supplier.

When is This Act Not Applicable?

✦ A seller who levies a discount on goods for all purchasers is not liable for prosecution under this act, if some purchasers choose not to avail of the discount.

✦ The act is not applicable to military sales and acquisitions.

✦ If the discriminatory prices are applied by the seller to meet discounted prices of a competitor, then it is not applicable.

✦ The act is not applicable in cases where the difference in prices is because of variation in manufacturing techniques, sales, or delivery, which helps the manufacturer cut down on his costs.

✦ If the price change is due to some variation in market conditions, then the supplier is not liable to be prosecuted under this act.

✦ Any buyer who receives goods at discriminated prices, without any knowledge, i.e. unknowingly, cannot be prosecuted.

❑ Perkins Vs. Standard Oil of California
Perkins was an independent wholesale and retail distributor of oil and natural gas. Its sued Standard Oil in 1969, alleging that for several years, Standard Oil Co. had charged Perkins a much higher price than its competitors, and also that it suffered business damages due to competition with a subsidiary ‘Regal’ due to the discriminated prices. The Court of Appeals found Standard Oil Co. guilty of violating the Robinson-Patman Act.

❑ FTC Vs. Morton Salt Co.
In 1948, during a hearing against Morton Salt Co., a distributor of salt, the US FTC found that even though Morton claimed that it supplied its premium brand of salt to all retailers at an equally-discounted price, in reality, this discounted price was available only to those retailers who made bulk purchases. So, FTC found Morton Salt Co. guilty of violating the provisions of the act, and the verdict was upheld by the US Supreme Court.

While the main purpose of the Robinson-Patman Act was safeguarding the rights of smaller retailers, it has been subjected to significant criticism. The Supreme Court itself has said on several occasions that the language used in the act was ‘vague’ and too complicated. It has also been argued that the act was passed under pressure owing to retailer agitations, and it does not take the consumer’s rights into consideration.