What are world records if they are not strange or weird? The length that people go through to get their names in the record books is truly amazing. Here are 10 world records that are downright bizarre... 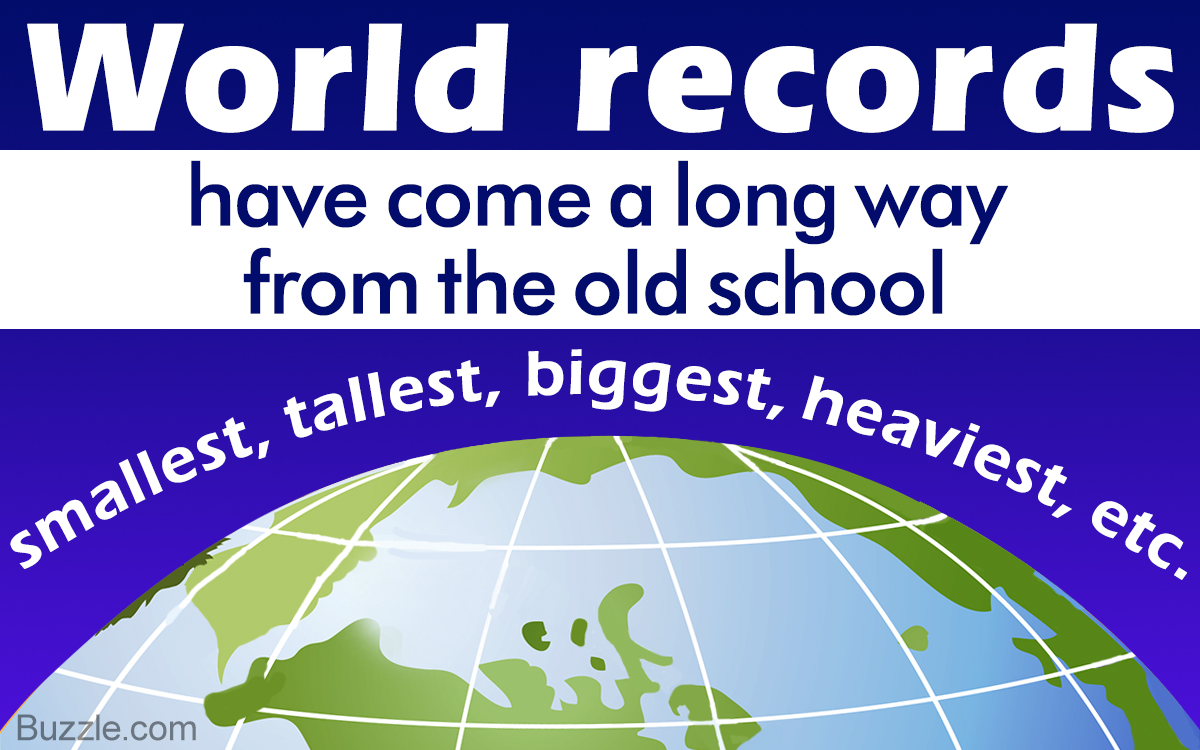 What are world records if they are not strange or weird? The length that people go through to get their names in the record books is truly amazing. Here are 10 world records that are downright bizarre…

The categories of world records have come a long way from the old school smallest, tallest, biggest, heaviest, strongest, etc., to ones which are, well, bizarre and weird. And as we know, nothing arouses interest and curiosity, or at least a chill in the spine, more than the extraordinary and the abnormal.

So, here we have rounded up a list of 10 really bizarre world records set and accomplished by people who manage to live their lives away from the herd, and stand out from the crowd.

It is most likely that you may find some of the feats mentioned here gross or unappetizing, but their uniqueness is something that deserves our attention, and to some point, admiration as well. This list of the world records follows no particular order.

*This post is purely for information and entertainment purposes. The images presented here are solely the reproductions of the author, and in no way, meant to belittle anyone’s work or hurt their sentiments.

The tongue is one of the strongest and most important organs in the human body.

It helps us chew, swallow, and taste food. It also helps us in speech. Apparently, this muscular organ can also get a few people a place in the Guinness World Records. For now, those few people are Chanel Tapper (USA), and Stephen Taylor (UK). Chanel is the woman with the longest tongue, which is 9.75 cm (3.8 in).

She set the record on September 29, 2010. Stephen has the longest tongue in the world, which measures 9.8 cm (3.86 in). This record was set on February 11, 2009. So, every time you get into a verbal spat with your neighbor, you may want to measure your tongue; who knows, you may qualify for the competition.

How do you mix milk into your coffee? You may pour it from a container, or you may use a spoon.

But, Turkish man Ilker Yilmaz has mastered a bizarre way of doing it. Mr. Yilmaz can suck milk through his nose, and squirt the liquid 279.5 cm out of his eye. He set this record on September 1, 2004, in Istanbul, Turkey. According to Mr. Yilmaz, it took him almost three years of practice, and more than 100 liters of milk, to accomplish this ‘milky feat!’

When we see a cockroach crawling in our kitchen, the first thing that flashes in our mind is to quickly look for a roll of paper or something to swat the life out of the pest! Ken Edwards, on the other hand, may have a different perspective altogether.

Ken Edwards (UK) ate 36 cockroaches in one minute. This cockroach massacre took place on March 5, 2001, on the set of a popular British television show. Bizarre to your eyes or to his taste buds? You decide!

When we burp in public, especially at a food joint, we raise some eyebrows, and a quick apology is what follows.

But when Paul Hunn (UK) burps, a mere ‘sorry’ does not suffice. Paul holds the record for the loudest burp by a male, which is 109.9 decibels. He set this record on August 23, 2009. Oh, by the way, just so you know how loud that is, at 112 decibels ear damage can occur within a minute of exposure.

Who doesn’t like bubbles? We all like to blow them, and see them dancing in the air, before they touch something and go pop!

Yang also holds many world records for performing other marvelous feats with soap bubbles. He set his first record by making the largest spherical soap bubble (2.3 m in circumference), in the year 1992, in Berlin, Germany.

Who Moved My Maggots?

But, when they are found in someone’s mouth – downright bizarre! Charlie Bell (UK), moved 17 kg of maggots in one hour, using only his mouth. This maggot feat was performed by Bell at Pinewood Studios, UK, on April 7, 2009.

Some strings are used to fasten stuff, some for music or making a string phone, and some for whirling pebbles at passers-by.

But there are some strings that do not have to be in such states of high tension. All they have to do is explore narrow caves and trenches, and finally come out to see the daylight.

Justin Therrien (USA) is the man known for inserting a 77.79 m (255 ft 2 in) long string through his nose and getting it out of his mouth. He achieved this feat in 1 minute, on May 15, 2012. I guess Mr. String was dying to take a shower after his long and slimy trip!

What do you think most people do in their eighties? Johanna Quaas is 86, and guess what she does?

She competes in gymnastics competitions. That’s not all! She is a regular participant in these competitions, where she wins as well! Born on November 20, 1925 in Germany, Johanna is the oldest gymnast in the world. She performed her first competition at the age of 56. As soon as she wakes up, Johanna goes up and down the stairs. Go Super Granny!

If getting a tattoo were to represent a reading on the ‘bravery meter,’ then the machine would have probably breathed its last while working with two people – Julia Gnuse and Lucky Diamond Rich. Julia Gnuse, also known as the ‘Illustrated Lady,’ holds the record for the most tattooed woman in the world.

95% of her body flaunts tattoos of cartoons, her favorite actors, and other type of art. Holding the record for the most tattooed person in the world, however, is Lucky Diamond Rich, with 100% of his body decorated in ink. So, how much does your ‘bravery meter’ read?

Ah, the pleasant sweet aroma of flowers, or a cake baking in the oven, or a freshly cut fruit, or steaming stew on a cold morning!

But what if instead, you come across a stinking sock or someone who hasn’t washed their shirt for ages? We all know the feeling! Guess what Madeline Albrecht has to say about this? She was employed at a testing lab (Hill Top Research Laboratories in Cincinnati, Ohio, USA) for the footwear and foot care brand Dr. Scholl’s.

Her long career of 15 years at the lab allowed her to set the world record for sniffing 5,600 feet (approx.) and armpits whose count has not been determined. How’s the stinking sock looking now?

All these world records can be called bizarre, weird, gross, or strange, but they are undeniably unique and interesting, and definitely, an example of sheer dedication. I mean, how many people do you come across who can squirt milk from their eyes, or smell armpits and feet for a living?