Summary and Significance of the Harrison Narcotics Act of 1914

Considered to be the basis behind most anti-drug legislations in the United States, the Harrison Narcotics Act of 1914 had a major impact on the national and international drug market. In this article, we will discuss the summary and significance of this important legislation. 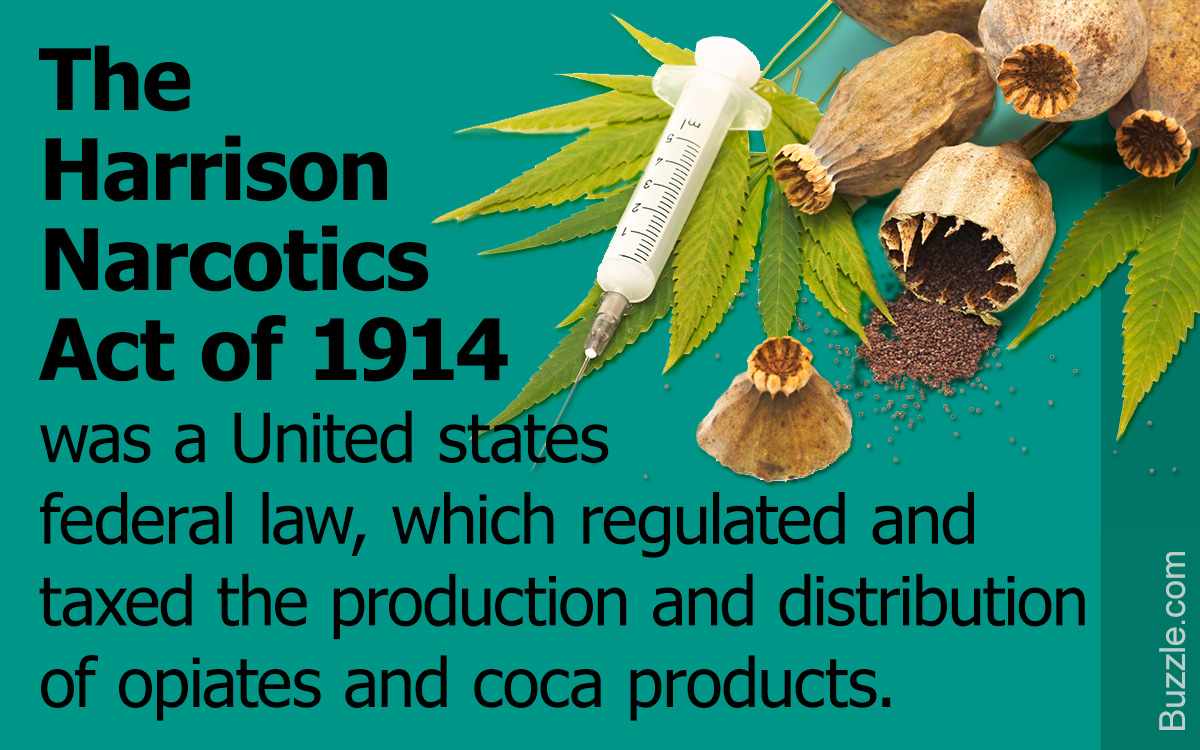 Considered to be the basis behind most anti-drug legislations in the United States, the Harrison Narcotics Act of 1914 had a major impact on the national and international drug market. In this article, we will discuss the summary and significance of this important legislation.

Summary of the Harrison Act

Passed by Congress in 1914, the Harrison Act, also known as the Harrison Narcotics Tax Act, was the first instance to apply criminal laws to the non-medical use of drugs. Its primary purpose was not only to tax and regulate the sale and distribution of drugs, but also their import and production. Under the Act, any person who was related to the production, import, and distribution of opiates and coca products within the United States was liable to be taxed, and had to register themselves with the IRS. It was intended that the records of such transactions would make it easy for the government to monitor the movement of drugs across the country, and confine the use of such substances only to medical uses. It was stated that anyone breaking the law could face fines up to USD 2,000, and an imprisonment of up to 5 years.

The history of the Harrison Act can be seen from both, international and domestic viewpoints. After the American-Spanish war, the United States won the islands of the Philippines from the Spaniards. However, they found that opium addiction was a major problem in the civilian population over there, as the Spanish had never made much effort to regulate these substances. To combat this, American missionaries in the Philippines recommended that the use of narcotics had to be brought under international control. Agreeing to this viewpoint, President Theodore Roosevelt and the United States Department of State saw this as an opportunity to improve relations with China, as the Chinese had suffered a lot in the opium wars. The U.S. called for international conferences on drug control, which lead to the first international drug control treaty in 1912.

Back in the United States, cocaine and opiates were unregulated till the end of the 19th century, where one could easily buy a syringe and some cocaine for as less as USD 1.5. However, with the advent of the 20th century, medical researches began linking the usage of opiates and other drugs with crimes. To counter this alleged problem, the representative of New York, Francis Burton Harrison, proposed this Act to control drugs. Supporters of the bill specifically targeted blacks, Mexicans, and Chinese immigrants, who were thought to commit crimes like rapes and shootings under the influence of these drugs. In fact, certain medical practitioners even gave testimonies to the effect, that cocaine gave blacks superpowers, which encouraged them to rebel against white people of authority. All this was highly sensationalized and hyped by the newspapers, adding support to the passage of the Act. Following this, the Act was finally approved on the 17th of December, 1914. Recent research however suggests that the racial profiling done during this period was inaccurate, and the fact was that, white Americans were using more cocaine and opium than their black counterparts.

The Harrison Act, on its surface, was not meant to be prohibitive at all. It was stated as ‘an Act to provide for the registration of, with collectors of internal revenue, and to impose a special tax upon all persons who produce, import, manufacture, compound, deal in, dispense, sell, distribute, or give away opium or coca leaves, their salts, derivatives, or preparations, and for other purposes’. However, the result was not as expected.

Significance of the Act

Reduction in Opiate Distribution: Initially, it was thought that the provisions of the Act merely looked to regulate the marketing of opiates and other narcotics. However, a clause concerning doctors prescribing drugs ‘in the course of his professional practice only’, caused confusion. This clause was interpreted by the law enforcement agencies to mean that doctors could not prescribe opiates to addicts, because addiction was not considered to be a disease. This caused a number of medical practitioners getting arrested and jailed. This sort of adverse action widely discouraged doctors from prescribing opiates to addicts, which was supported in a decision by the Supreme Court in 1919.

Changes in Laws: The lowered supply led to stricter law enforcement, as newspapers started reporting on increasing crimes that were allegedly perpetrated by people suffering from withdrawal symptoms. The United States Congress added further provisions to the Act in 1924, which completely banned the import of heroin. Strict laws drastically reduced the number of opium users all across the nation. Various drugs available were now strictly classified substances, between those which were to be controlled as narcotics, and those that were not, depending on their legal status, rather than their psychological effects. Also, the law required that these drugs had to be labeled with warnings: ‘Warning: May Be Habit Forming’.

Drug Related Crime: Since the prescription and usage of opiates and other drugs weren’t illegal before the Act was passed, suddenly, addicts found themselves being labeled as criminals. However, this was not seen as an effective method to stop drug use. In fact, prominent law enforcement officials came out against this, and said that punitive action was not helping the situation, and that the drug problem should have been solved with the help of medical research, rather than enforcing strict laws. The Act also saw the beginning of smuggling and black markets for drugs. A special investigating committee reported that, by 1919, large amounts of drugs were being smuggled in through the Mexican and Canadian borders, and that the United States was consuming much higher amounts of opium than most European countries at the time. Like the prohibition on alcohol, the war on drugs was seen by many as oppressive, devastating, and very expensive; a sentiment that can be seen often even today.

The Harrison Narcotics Act was largely superseded by the Controlled Substances Act of 1970, which has brought in many sweeping changes. However, none will dispute that the Act of 1914 was an important first step in America’s war on illegal drugs, which has had far-reaching consequences to the present day.