Air Force One is considered to be the most secure plane in the world, and it is meant for the secure transportation of the American President from one place to another. The plane is a Boeing 747-200B military aircraft, and was modified to meet presidential requirements. 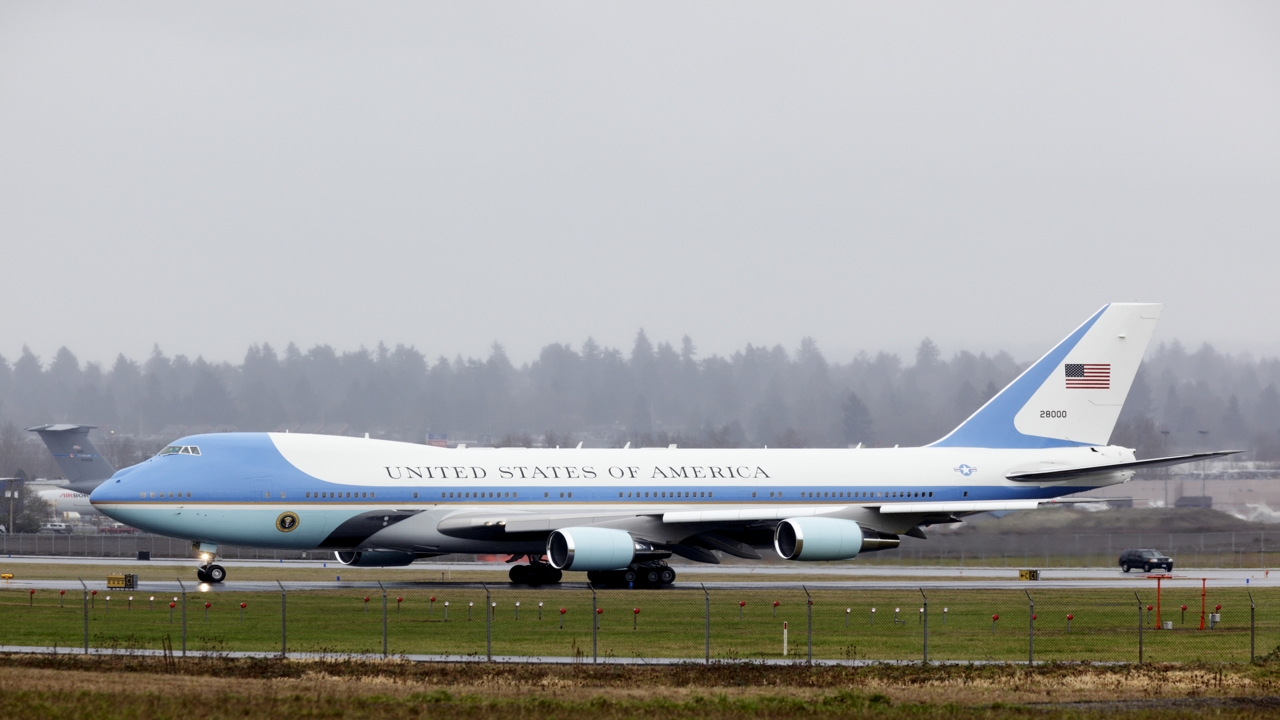 Air Force One is considered to be the most secure plane in the world, and it is meant for the secure transportation of the American President from one place to another. The plane is a Boeing 747-200B military aircraft, and was modified to meet presidential requirements.

Boeing delivered twin 747-200B planes designated as VC-25 with tail numbers 28000 and 29000, which were modified to incorporate the most advanced communication and cutting edge technologies. These aircraft replaced the Boeing 707-320 airframe that served former American presidents for nearly 30 years. The plane showed its use as more than only an executive jumbo jet, when it seemed to be vulnerable to attack on September 11th, that time, the president was given security by Air Force One aircraft, which became a mobile and safest bunker for the president.

It is also called the ‘The Flying White House’ or ‘Oval Office’, and has 4,000 square feet of interior floor space, which features a conference/dining room, quarters for the president and the first lady, an office area for senior staff members, and not to forget many out of the world’s most advanced and cutting edge technologies. The plane has every facility that is required; the other office in the plane can be converted into a medical facility if required, it also has a staff doctor who travels wherever the president goes. The plane has areas which are divided into work and rest areas for the president, presidential staff, media representatives, and Air Force One crew. It has two galleys which are capable of providing food for 50 people each.

The aircraft was modified to contain different lobes―the lower lobe contains cargo, the middle lobe accommodates rooms for staff and other passengers, and the highest lobe is dedicated to communication set up. The lower lobes of the aircraft were modified to contain staircases, a highly important store-room where food up to 2,000 meals can be stored; it also accommodates important equipment which are used during missions. This area also contains some highly advanced electronic gadgets. The wiring and all the electronic devices are shielded for protection from electromagnetic pulses, which can be generated by thermonuclear blasts or similar events. The system on the plane provides worldwide transmission and reception of normal and secure communications. The equipment includes about 85 telephones, multi-frequency radios for air to air, air to ground and satellite communications which can connect the president with anyone who is even thousands of miles away. There are some secure and encrypted telephone lines among the 85. It also has radio communication devices other than telephone lines, faxes, many television sets, and computer connections which connect the plane with the outer world. It is the world’s most advanced plane, which carries systems that are not known to many. It has aerial refueling capability, which provides it with indefinite flying time during emergencies, and virtually unlimited range. The aircraft has state-of-the-art navigation, communications, and defense system.

The Air Force One fleet is flown by Presidential Airlift Group, and is assigned to Air Mobility Command’s 89th Airlift Wing, Andrews Air Force Base, Md. Four General Electric CF6-80C2B1 jet engines with a thrust of 56,700 pounds each, nearly 71 meters in length, power the aircraft. The plane has a height which is nearly 19.3 meters, and the wingspan is of about 60 meters. The plane can attain a speed of 630 miles per hour, i.e., 0.92 Mach, and about 4,000 feet of floor space can accommodate about 95 passengers and 2,000 meals at a time. Along with these, the plane has an automatic baggage loader and many other features, which makes it self-sufficient. It does not have to depend on the host airport’s facilities, which is concerned with security issues.

Every time Air Force One flies, it is considered a mission. And different teams are deployed to perform different tasks. Marine One helicopter brings the president to Air Force One. During this time, security teams all over the base keep an eye on any unauthorized activity, and they have permission to shoot at sight. Also, the area where president has to land, all vehicles like limousines and vans are sent in advance, which are bulletproof and loaded with all the necessary weaponry to keep the president safe. The crew of the aircraft is highly classified military personnel, who are trained in every aspect, and can withstand any situation. They are trained to understand and use different tactics, right from buying food for the president to handling issues. Along with this, there are many other things still unknown to outsiders, and are virtually impossible to be exposed, as they are related with the security of the president.