The formidable Roman empire possessed extremely well-disciplined armed forces, and the weapons used during their numerous battles were, needless to say, state-of-the-art.

The formidable Roman empire possessed extremely well-disciplined armed forces, and the weapons used during their numerous battles were, needless to say, state-of-the-art. 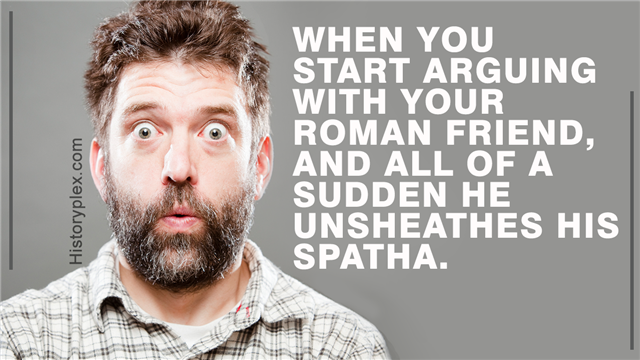 The Roman empire – one of the greatest military powers of the ancient world – rose from present-day central Italy. The ancient Romans have a history of hundreds of years of warfare and conquests. By subduing the neighboring lands in numerous wars, and establishing their sway over them, the Romans had virtually conquered the entire region of Italy by 264 B.C.

At its peak, the frontiers of the mighty Roman empire extended from the north of England across the North Sea, along the Danube and Rhine rivers to the Caspian Sea in the East, to the African coast (including Egypt) in the South, to Spain and France, along the Atlantic, in the West. Undoubtedly, the Roman empire had one of the strongest military powers in the ancient world, owing to their superior weapons and ingenious war tactics.

The Roman army was open-minded enough in adopting the war tactics and even the weapons of their enemies, if they could benefit from them.

Initially, the Roman military used weapons which were primarily Greek and Etruscan in origin. However, numerous new weapons were adopted by the Roman military, whenever they came across better and more effective ones. It has been suggested that the ancient Romans were largely influenced by the designs of the weapons of the Celts and the Carthaginians, as we find striking similarities between these weapons.

Interestingly enough, adopted/influenced weapons were then manufactured and distributed amongst a large number of Roman soldiers, thus becoming standard weapons used by the Roman military. Swords and spears were the main assault weapons of a Roman soldier. Given below, are some of the most commonly used weapons

The ancient Romans also used some complex weapons such as ballista and onager. These were nothing but ranged weapons, which served the purpose of throwing large explosives with maximum accuracy at distantly set targets. These complex weapons also ensured that the damage caused to the opponent was huge.

Roman legionaries also used an array of protective gear. These included armors, helmets, shields and so on. Added to this, in order to march through the ranks of the enemy with success, the ancient Romans had formulated some of the best war formations ever used in world military history. One such war formation, which is worth a mention, was the testudo or the tortoise formation, which was virtually impregnable.

If we think of all the technological advancements that followed their era, the weapons of war used by the ancient Romans may seem very rudimentary. But, the weapons were definitely effective in those days, and the successful history of Roman warfare stands testimony to this fact. The mighty Romans were also extremely good in making and implementing war strategies, one of the very important reasons they managed to hold sway over such a large territory for so long a period of time.