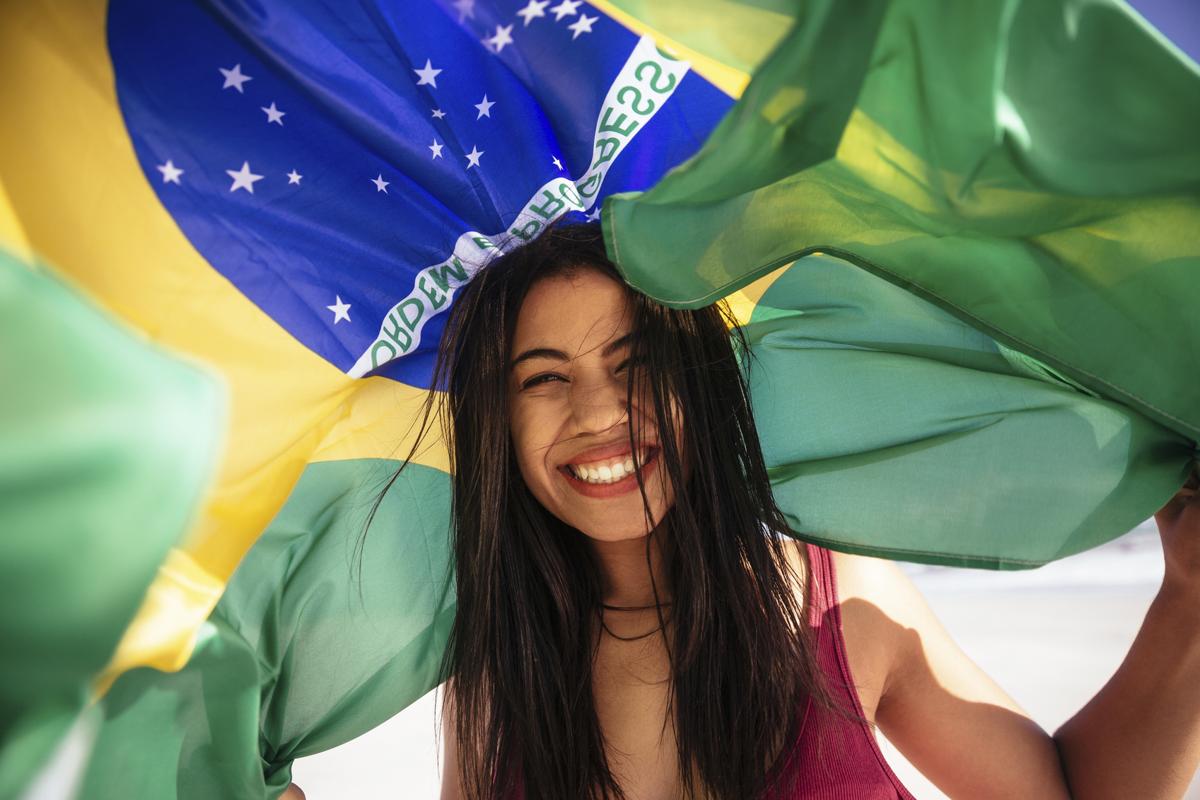 Brazil has the distinction of being the country in which the largest flag in the world is flown. This flag is furled at the Square of the Three Powers or Praca dos Tres Poderes, weighs about 600 kg and has a span of 7000 square meters. The national flag of the country was first hoisted just four days after Brazil was declared a Republic after a coup d’état to overthrow the royals. The meaning plays on the symbology of the wealth of the country and also depicts the states of the nation.

The Brazil flag was adopted on 19th November 1889, four days after the country was declared a republic. Marshal Fonseca overthrew the reigning Emperor Pedro II and established the Republic. It was after this that the Minister of Finance and Taxation, Ruy Barbosa proposed that a new national flag should be designed. One of the main inspirations behind the flag designed by him, which was flown on the day that Brazil was declared a Republic was the American flag, also known as the Stars and Stripes. But Fonseca as the acting President scrapped the design because of its similarity to the another nation’s flag. The design that Barbosa suggested remained the base for the design of the flags of the states of Sergipe, Piaui and Goias.

Fonseca believed that the new flag for the country should maintain a resemblance to the old imperial flag of Brazil, because despite his coup which was conducted only to maintain the stability of the country, Fonseca was a sympathizer of the Royals. He wanted the flag to have the same colors and the court of arms, to keep a link to the flag’s history. The commission for designing the national flag was given to Raimundo Teixeira Mendes, a philosopher and mathematician who collaborated with Miguel Lemos and Manuel Pereira Reis to do the same. Mendes, who made changes to the design that Fonseca wanted, also came up with the motto, Ordem e Progresso, which is the national motto of Brazil and also present on the flag.

The Brazil flag is green in color, with a large yellow rhombus in the center of the flag. Within the rhombus is a blue circle and in the circle are 27 white five-pointed stars. Originally, the flag had only 21 stars but in 1992, this number was increased to 27 due to the increase in the number of states in the country. The stars in the blue circle are all of five different sizes. There is also a white band that runs through the circle with an inscription of the national motto on it in green capital letters.

The Brazilian flag has four colors; green, yellow, blue, and white, with green and yellow being the predominant colors in the flag. But what do the colors on the Brazilian flag represent? The green color in the flag represents the fields and forests of Brazil and the yellow of the flag represents the gold reserves of the country and therefore, represents the wealth of the country. Green and yellow were the predominant colors in the old flag as well, with green representing the House of Braganza of the first Emperor, Pedro I and the yellow representing the House of Habsburg of Maria Leopoldina, who was Pedro I’s companion. The blue circle with the white stars represent the sky over Rio de Janeiro, on the night that the country was declared Republic, that is, 15th November 1889. Each of the white stars represents a state in Brazil. The motto inscribed in the white banner, Ordem e Progresso translates to order and progress.

Each star on the flag is a representation of an actual star which is a part of a constellation visible from Rio de Janeiro. Given below is a list of the stars, the constellations they belong to, and the state they represent.

There are many other etiquette that need to be kept in mind while handling the Brazilian flag. Along with the meaning, this protocol too is unique to the national flag of the country.