Catapult history dates back to 300 BC, but the most advanced catapults were created by the Greeks and the Romans. The sheer power of these siege weapons struck fear in the hearts of many enemies. 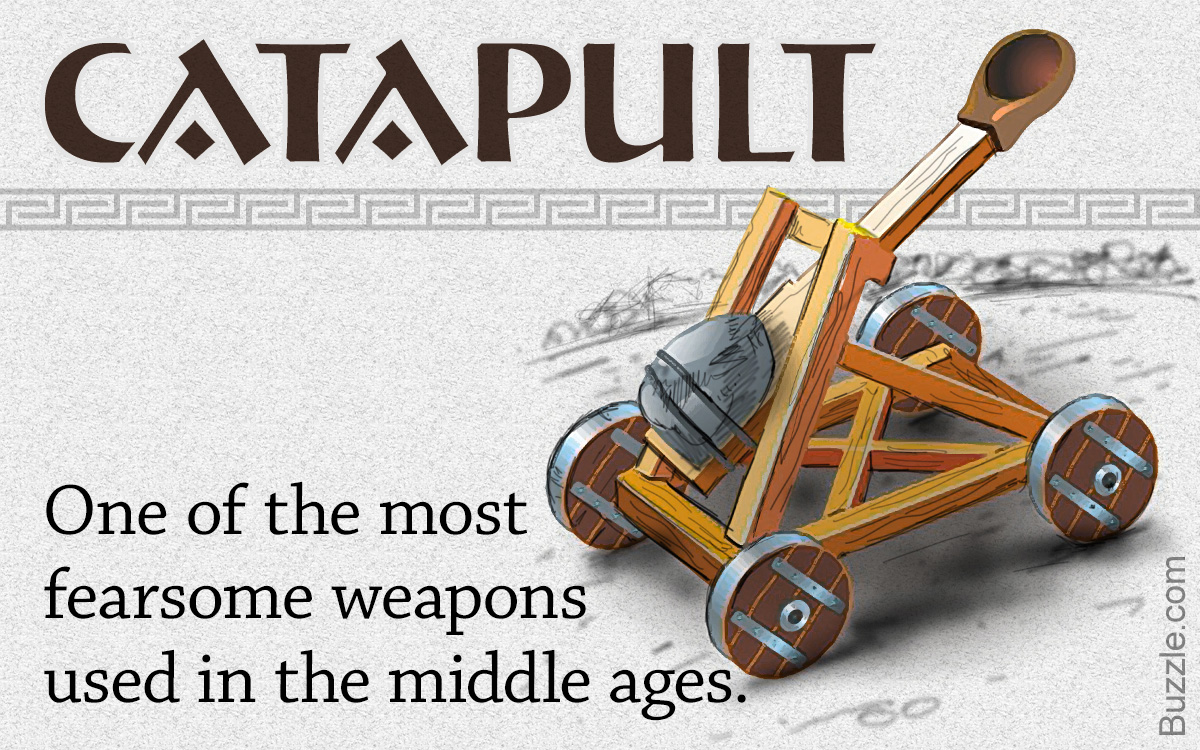 Catapult history dates back to 300 BC, but the most advanced catapults were created by the Greeks and the Romans. The sheer power of these siege weapons struck fear in the hearts of many enemies.

In medieval times, countries were constantly waging wars against one another, trying to establish their dominance. This was often decided on the basis of whose fortifications were more easily breachable than the others. While a lot of effort and planning went into building up the defenses and forts, an equal amount of effort was put into trying to come up with weaponry that would help tear down the enemy forts. The catapult was one such invention, that completely changed the course of many wars, and was often the decisive element that decided the fate of the strife. It still finds its place in modern warfare, although in a completely different form as compared to its predecessors.

What is a catapult?

Any device or machine that can propel a projectile (explosive or otherwise) over a distance is called a catapult. They were originally invented by the Greeks, and the name itself finds its origin in the Greek words kata (downwards) and pallō (hurl). Over the years, the catapult was redesigned and used in its different forms by many armies around the world. It was used in war, that dates back to as early as 399 BC. The great Leonardo Da Vinci too, came up with his own version of the catapult.

What are the types of catapults?

Down the years, the design of the catapult was further worked on, and each army had its own version of the same, each more deadlier and having a greater range than the previous one. Some of the most effective and widely used catapults are listed below –

Ballistas were giant crossbows, which worked on the same principle as their smaller cousins, the handheld crossbow. Although they were deadly accurate, ballistas weren’t too effective siege weapons, as they lacked the serious muscle power needed to knock down the enemy fortifications. Also, their limited mobility was another hindrance during war times, and they were often put together at the battlefield. These were widely used by the Romans and the Greeks towards the end of the third century.

An adaptation of the original ballista, the springald was believed to have originated in the Middle East and the Byzantine Empire. As opposed to other catapults, this was mainly used in a defensive role, within a fort, rather than on the battlefield. It was not as powerful as its other cousins, and was mainly used as an anti-personnel weapon at close range. It was mostly installed on the top of fortifications to ward off the enemies. As it wasn’t the most efficient of catapults, its use was restricted to a much smaller region.

Mangonels were a more powerful adaptation of the catapult. The name was derived from the Latin word manganon, which means ‘engine of war’. The design of the original ballista was modified, and the new machine was now able to hurl objects (mostly rocks and at times combustible materials packed together) over longer distances. The one major advantage that mangonels had over ballistas was that the force of gravity was used to its advantage (the missiles followed an arc, as opposed to a straight path followed by those from a ballista) and helped cause a lot more damage, using a lot lesser force. They were invented by the Romans, but were extensively modified and used by the French and the British.

The onager was an adaptation of the mangonel, and relied on torsional force to propel the missiles. This was a rather effective and powerful siege weapon, and was also very mobile, thanks to the wheels attached. The Romans used it widely for most of their sieges. The onager was a lot smaller than most other catapults used in battles, and needed just two people to operate it. Its firing range was however a lot lesser than the other siege weapons that were in use.

Trebuchets were a refined version of mangonels, and focused on reducing human effort. The name finds its origin in the French word trébucher, which means ‘to throw over’. These were gigantic machines, which relied on using a counterweight to help generate the force to hurl heavy objects over considerable distances. They were amongst the most extensively used siege weapons, and were an integral part of armies around the world. The first trebuchets are believed to have been built by the Chinese, although the more effective counterweight trebuchets were used by the Byzantine emperor Alexios I Komnenos.

A smaller version of the trebuchet, the couillard was a lot easier to operate and needed just about 10 people to operate it. It was built on the same counterweight principle as its much bigger cousin, but unlike the trebuchet, it had just one support. It was used for smaller sieges, and had a much smaller firing range. It is believed to be a French creation, and was often used to complement the bigger siege weapons.

Through most of the medieval times, there were various adaptations of the catapult, in different shapes and sizes. Although the use of the catapult in its original form might have become obsolete, the same principle is still very much in use, and is in fact used to propel fighter planes off aircraft carriers. Even one of the children’s favorite characters from yesteryear, Dennis the Menace, always relied on his slingshot (another catapult) for most of his unintended pranks.