The Cherokees are a Native American tribe that reside in America, and they have devised their own symbol syllabary to use as a medium of communication. Almost every Cherokee Indian is familiar with these symbols and can understand them with ease. 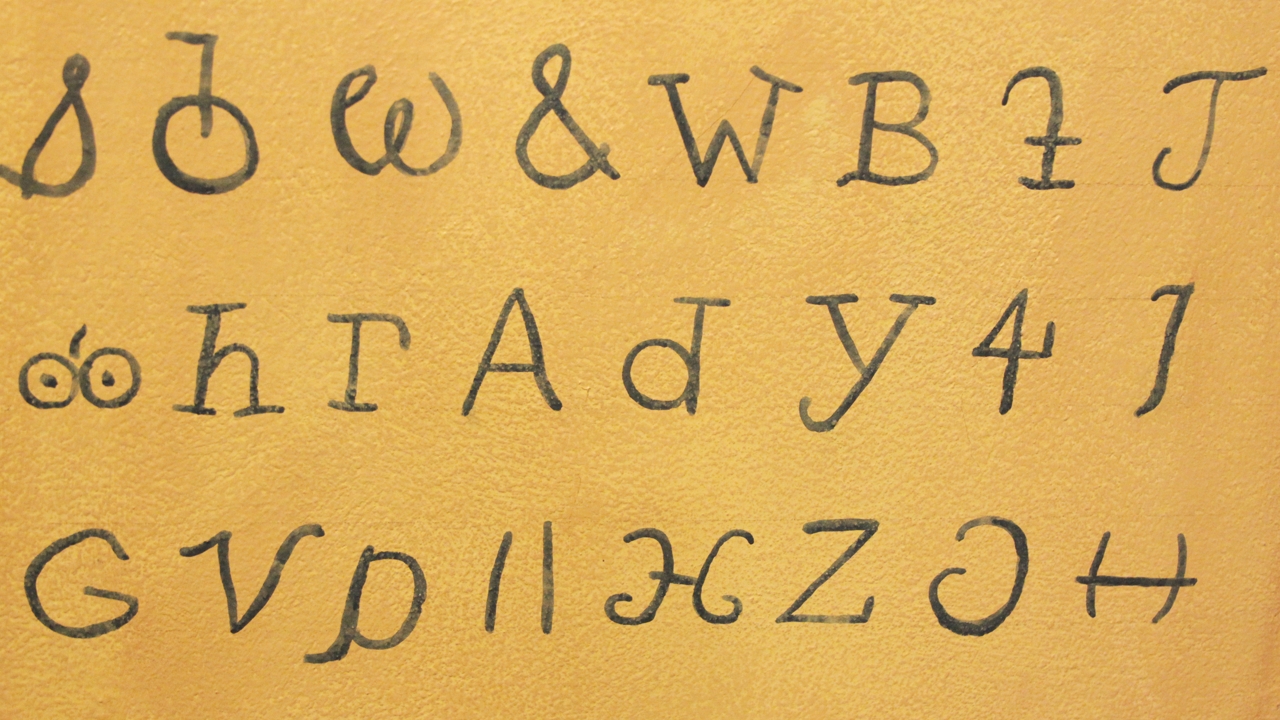 The Cherokees are a Native American tribe that reside in America, and they have devised their own symbol syllabary to use as a medium of communication. Almost every Cherokee Indian is familiar with these symbols and can understand them with ease.

Every culture has developed their own unique symbols and signs over time, and Cherokee symbols are widely recognized language tools that were developed by the Native American Cherokees to portray their beliefs. These symbols are distinguished as syllabary symbols.

Syllabary is a form wherein a particular symbol or representation is used to denote a fixed syllable. Thus a sentence will contain a few syllables, rather than a lot of words. The symbols that are used in syllabary usually sound like a consonant (which is optional), followed by a vowel. The symbols of Cherokees thus make use of syllabary, and not alphabets, because each symbol represents a distinct and unique sound.

According to the census in 2000 AD, the Cherokee tribe is made up of about 30,000 members. There are a total of 563 Native American tribes that are recognized by the Federal United States Government, and the Cherokees are the biggest amongst them. As a result, the popularity of their symbols and mediums of communication is quite high, and there are many people who can understand these symbols and speak them as well.

The Cherokee syllabary was created by Sequoyah, a Cherokee silversmith, in the year 1819. His contribution is noteworthy because he was completely illiterate and had no prior exposure to any form of written script. By 1825, his syllabary became immensely popular and the Cherokee tribes adopted it as their written language.

Each character denoted in a chart of symbols represents a particular sound, that ends with a vowel. The phonetic value of symbols differ and often mean two different things, thus implying that this is not easy to pick up. The pictorial representation of each syllable looks like an alphabet out of the English language, but it differs in the vocal sound greatly. 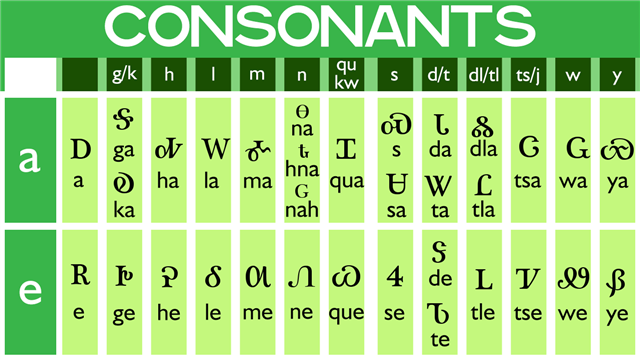 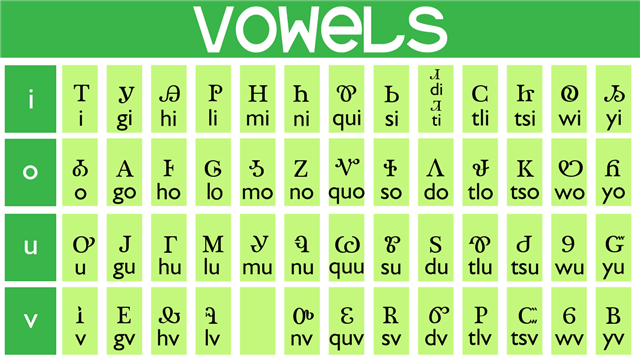 The pictorial representation of these symbols are very attractive to look at, so some people use these as tattoo designs as well. Tattoos of these symbols are quite commonly seen, especially in the Cherokee-inhabited areas, and these are intended to be a homage to their culture and belief systems. Most common Cherokee tattoos make use of the symbols for love, brotherhood, peace, harmony, unity and good fortune. These protect the wearer from evil spirits and give them peace of mind.

A warning sign of fast approaching danger or enemies.

Symbolic of hard work and perseverance.

Indicative of opting for another path to solve the problem at hand.

Indicative of an opponent or competitor coming your way.

Reminds us to respect boundaries.

Indicative of impending hard work, which would be required for your task at hand.

Is believed to be a warning sign of an impending crisis within the family.

One of the most positive signs of Cherokee symbolism, the bear is believed to bring you courage to face all the difficulties in life.

Indicates that you might need to devote more time to get your job done.

Another positive symbol, it is believed to bring in good news, usually associated with good fortune.

A symbol of strength, it is believed to suggest that you would have someone by your side through thick and thin.

Another symbol of strength, that will help you through your problems.

Symbolic of success, especially in your love life.

This is more of a mixed sign; it symbolizes the changing times, and could also be indicative of the changing of loyalties of your loved ones.

Closely associated with the spiritual world in most religions, it is believed to be a message for you to be more alert about things going on around you.

Is believed to be a sign of good news coming your way, and also a gentle reminder for you to keep your emotions in check.

Symbolic of wisdom being passed down from the spiritual world.

A warning sign to be aware of an attack from unexpected quarters.

Makes you aware of unexpected change headed your way.

Is a warning sign about the wrong path you’ve chosen.

Is a bearer of good news.

Speaks of a trusty friend.

Talks about the arguments and fights within the family.

Is symbolic of great positive energy coming your way.

Peace and tranquility prevails in all your works.

Is symbolic of your suppressed emotions, and longing for worldly pleasures.

Clears the distrust you had in a faithful friend.

Speaks of a hard path, but assured success.

Symbolic of great success against all odds.

Points to the need for better focus toward your goals to achieve success.

A reminder to be watchful of your choice of a loved one.

Speaks of a time for a complete change of heart and purification of your soul.

Symbolic of happiness headed your way, especially in your love life.

Reminds you to be more aware of things in your love life, and to sort out your differences.

Speaks of a great inheritance, but with a fair bit of traveling.

Speaks of an extremely trustworthy friend.

Reminds you to be strong in the midst of great troubles, and to have a good judgment.

Is believed to be a message about avoiding taking important decisions for a while, especially after sundown.

Is meant to make you realize that you may have wrongly judged a loved one.

Symbolizes an upcoming journey to a place you love.

A warning sign of grudge or revenge that is going to be acted out against you.

Advises you to seek better knowledge.

Symbolic of a great and important lesson headed your way.

Symbolizes immense strength, and also the advice to practice restraint and patience.

Symbolizes that a great secret is gonna be revealed to you.

Symbolizes that you are about to receive a great blessing in a vision.

Reminder for you to be more in control of the situation.

Speaks of the time to review things.

Warning about betrayal by a loved one.

Symbolic of false pride, that is keeping you from reaching out to a loved one you may have hurt.

Warns of an impending illness.

Warns of a stranger using flattery to deceive you.

A sign of a long and fruitful love relationship.

A sign to tell you to slow down things, and take a breather.

Time to clean up things, and your life.

A warning sign of someone about to misguide you.

Inspires a sense of satisfaction from your work, and a lesson well learned.

Sign of an unexpected pregnancy, that will cause a lot of trouble.

Warns you against being indecisive.

Tell you to beware of deceitful tongues and back stabbers.

Reminds you to resolve disputes at home to attain true happiness.

Warns you about envious eyes, and about being watchful against theft.

Symbolizes an impending illness to a loved one, or a sign of an embarrassing situation that awaits you.

Reminds you to be careful about stressing yourself out.

Brings the message of assured success in your conquest.

A mixed sign, which speaks of great fortune that awaits you, but also about close companions turning against you.

Signifies the enormity of the task at hand, and that you would need to seek assistance.

Cautions you from being over-trusting.

Reminds you to never stake your honor and reputation.

People interested in the symbols of Cherokees and their history can learn more about them and can even learn the syllabary for themselves. These symbols are very fascinating indeed, and carry a lot of history and heritage with them.