Chinese masks have been in vogue throughout the centuries, accompanied by some rich history. This article tells you the history and meaning behind some popular masks, and the rich traditions behind them.

Chinese masks have been in vogue throughout the centuries, accompanied by some rich history. This article tells you the history and meaning behind some popular masks, and the rich traditions behind them.

Masks were primarily created to don the personality of another, but were used for communicating with the dearly departed. Since mourning for the dead always felt incomplete, a shaman was needed to perform the rites as well as provide a link between the living and the dead. Chinese masks have a rich history dating back to rock cave paintings found near the Yangtze River.

Since their inception, masks have been used in wars to intimidate and create fear among enemies. They have also been used by street performers to don the personality of different characters in a play. Various examples of Chinese masks are the Tibetan masks, opera masks, as well as the lion head and dragon masks used during the Chinese New Year. Wedding masks have been donned to bring good luck in a marriage, as well as swallowing animal masks that are believed to swallow disaster. In the following sections, we tell you about the different masks that give a brief insight into Chinese traditions and culture.

The Chinese lion mask is used in the lion dance, a ritual performed at the end of the Chinese New Year. The lion dance is inspired by a mythical monster named Nian, that was driven away from Guangdong. The masks are usually constructed on a wooden frame with a papier-mâché design.

Dragons have always been a symbol of prosperity and fortune in China. They are worshipped by performing a dance done by 6 – 8 people since the costume is very large. The movement is manipulated by poles which are situated at appropriate places along the length of the dragon. The dragon mask is usually decorated with gold and silver colors, depicting prosperity. The typical mask usually has a wide mouth or a gaping jaw and is covered with feathers and fur. While green color depicts a better harvest, red color symbolizes excitement, while yellow depicts a solemn empire.

Tibetan masks were painted on the faces of the inhabitants with blood to scare off their enemies. Their face-painting technique seems to have been around since the Neolithic times. Tibetans used white masks until the sixth century, while the blue masks came into existence from the fifteenth century onwards. Buddhism played a major role in the cultivation of Tibetan opera and the survival of this art form. They worshipped deities, and the masks were made in their image from gum, flour, and cloth. Clay casts are used to create hard-shaped masks. The teeth are made of pearls and shells, while designs are painted directly on the masks. Tibetan masks are usually made of an animal, demon, or human forms.

These masks are influenced by the history of the Chinese kingdom, mostly the Song Dynasty. Each character has a different color painted on it to distinguish its quality. Although the masks are painted on the actor’s faces, they are available as a collector’s item too. They are made from wood or leather. The masks and their colors are explained here.

The name of the mask is Guan Yu. The color indicates courage, devotion, bravery, and loyalty. It’s inspired by Guan Yu, a general famed for his loyalty to his emperor Liu Bei.

The color black symbolizes boldness or an impartial and selfless personality. It was inspired by General Zhang Fei, and noted for its black cross butterfly design. It is also known as the Zhang Fei mask.

This color signifies levelheadedness and ambition. The most notable person is Tuxing Sun, a dwarf general with special powers in the play ‘Three Mountain Passes’. It can also stand for a cruel and short-tempered personality. It is also called the Tu Xingsun mask.

The color blue represents astuteness and staunchness. It can also signify the characteristics of cunning and sinister ambitions. It also goes by the name Xia Houdun.

The color green symbolizes violence and impulsiveness. Bandits who proclaimed the title of lords were depicted with this color. It is also called the Zheng Wun mask.

Deity masks are usually painted red, as the Chinese believe red brings prosperity and happiness. The mask is usually created in the image of the gods, and carved from wood. It is decorated with swirling colors, making it vivid and colorful. It is also covered with gold ornaments. Plus, the color red was used in battles to intimidate enemies. But mostly, the deity mask is worn in shrines, where the performers wear these special masks to narrate the stories of the gods.

The color purple stands for uprightness and sophistication, mostly noted for nobility. It is also called the Lian Po mask.

The color white is used to symbolize treacherousness and craftiness. It is reserved for the villain of the play, most notably Cao Cao, the prime minister in the play ‘Three Kingdoms’. It is Also known as the Cao Cao mask.

This is reserved for the clown or the comic character in a play. The paint is a small patch of chalk around the nose, depicting meanness. It is also called the Jiang Gan mask.

Lately, masks have been used by newborns to celebrate the New Year as well as to ward off evil spirits. That being said, the culture of China is still intact, and their stories still survive due to these masks. 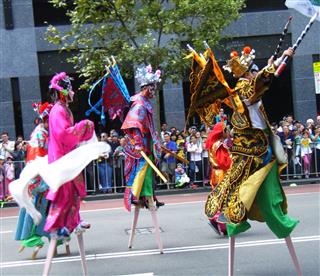 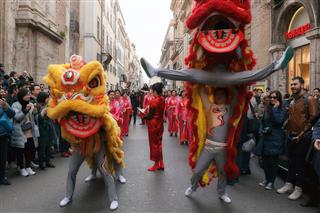 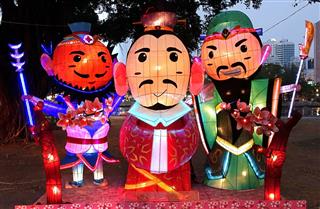 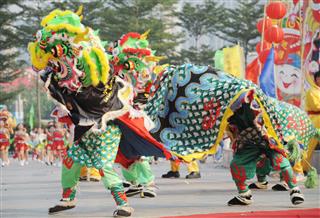 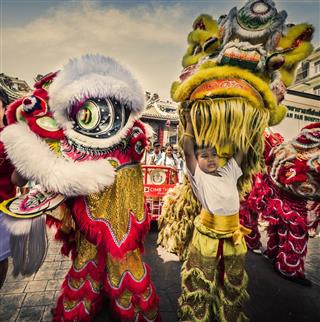 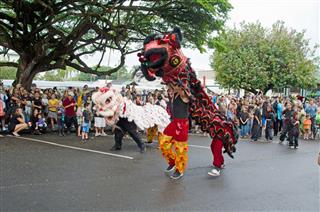