Key Differences and Similarities Between Chinese and American Culture

Every culture is equally fascinating, with its cuisine, traditions, perspectives regarding business, relationships and life, and so much more. China and America are two leading global superpowers, both having cultures that are somewhat similar to one another, and yet greatly differ from each other. Buzzle tells you the key differences and similarities between the Chinese and American cultures. 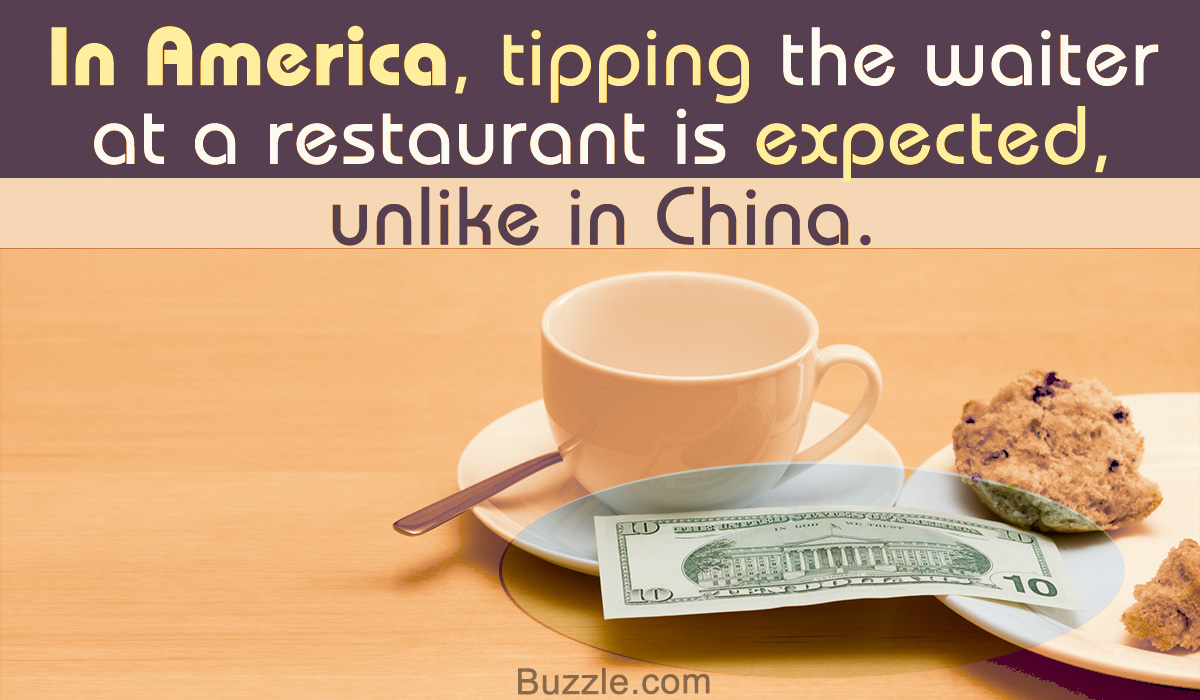 Every culture is equally fascinating, with its cuisine, traditions, perspectives regarding business, relationships and life, and so much more. China and America are two leading global superpowers, both having cultures that are somewhat similar to one another, and yet greatly differ from each other. Buzzle tells you the key differences and similarities between the Chinese and American cultures.

We may have different religions, different languages, different colored skin, but we all belong to one human race.
― Kofi Annan

Culture is an amazing concept, albeit a man-made one, which has existed for thousands and thousands of years. Every country, every region, every community in the world associates itself with a particular culture, and derives its cuisines, customs, traditions, values, norms, and history from the same. It is wondrous, really, how every culture is so fascinating―the more you learn about it, the more it astonishes you (in a good way, of course!). Those who have wanderlust will understand what we’re saying better, as just listening to tales or reading about a culture may not be enough to actually absorb its essence. It is quite important to actually experience it yourself, to know what it really is all about.

Have you noticed how two cultures from different sides of the world can be greatly similar, as well as so very different from one another? Take the United States of America and China, for instance. Both are among the leading global superpowers today. Both have a rich history. Both have so many achievements to be proud of. And yet, we see so many differences in the basic perspectives of the Chinese and the American people, be it about the way they choose to do business, the concept of relationships, or different traditions. The next sections will cover the major differences and similarities between the two cultures. Read on!

Considering that both countries are business magnates in their own right, it can seem quite surprising to find that there are differences in the way business is conducted in both cultures.

In China, establishing cordial relationships in business is extremely important, no matter how much time that takes. While the concept of contracts does exist on quite a large extent in China, they are not given as much importance as in the West. In China, business people take time to establish relationships until the opposite party can be trusted, and often, contracts are merely a formality which sometimes aren’t even drawn up. A handshake or verbal promise is enough to seal a deal.

While Americans aren’t opposed to establishing business relationships, the main focus actually is the speed and efficiency of the transaction and sealing the deal. Business in the U.S. is consequently more cut-throat and competitive than in China. Contracts are seen to be the most important requirement in a business deal in America. Businesses in the U.S. operate according to these contracts, which contain all the terms and conditions to be followed by both parties.

The contract is given utmost importance as it helps avoid any miscommunication, misunderstanding, and any risk of fraud.

The American approach to teaching is more free, as compared to the Chinese one. There are many tutors who encourage their students to call them by their first name, or even an abbreviation. Students are encouraged to freely participate in the class, and it is expected that they be allowed to express their ideas and thoughts freely. Tests and exams are conducted to check the student’s subjective understanding of a subject, and not to test his/her memory.

In China, the teacher is seen as an authoritative figure in the classroom, and students need to raise their hand as a mark of permission before asking or saying anything in class. Students are not expected to use anything other than the teacher’s title and maybe his/her last name when addressing him/her. Tests and examinations conducted are more likely to test the student’s memory rather than his/her subjective understanding of a subject or topic.

In America, there is no rigid social hierarchy that demands any specific kind of relationships. Calling people older than you by their first name is well-accepted and in many cases, even expected. There is great fluidity between relationships in the American culture, where all kinds of interaction is relaxed and encouraged. In case of familial relationships, parents are actively involved in their child’s upbringing, but it isn’t expected that children take care of their parents in their old age. Independence is valued and encouraged. Within friends, it is not expected that favors need to be especially appreciated or specifically returned. The concept of relationships is in itself very relaxed in the American culture.

In China, there exists a social structure that inevitably results in a rigid social hierarchy. Elders are not expected to be called by their first names by those younger to them, and titles or other specified terms are to be used when addressing older people. The Chinese culture is very relationship-oriented, and people tend to value relationships more. Once they are established, great care is taken to maintain them. In familial relationships, children are expected to take care of their aging parents. In friendly relations too, if someone bestows a favor upon you, you are expected to return it as well as fully appreciate it. The Chinese culture fiercely values all sorts of relationships.

In America, focusing on oneself and striving for individual success is the accepted norm. The American culture is more individualistic in nature. Each person is encouraged to strive and work for personal growth and success. Individuals are encouraged to prioritize themselves above all, and work solely towards developing and achieving their own ambitions. The American culture is generous with its praise and criticism, and humility may sometimes even be observed as a weakness.

In China, decisions are made with keeping the ‘greater good’ in mind. The Chinese culture is more collective in nature, and the people are encouraged to think thoroughly about how their actions will affect those around them, and not only themselves. Humility and modesty is appreciated, even expected, and the Chinese culture does not encourage boasting about personal successes.

The American culture encourages direct confrontation or discussion when something seems debatable or not right to a person. Direct criticism, discussion of controversial issues, and personal opinions about anything are all acceptable in the American culture. This is considered more important than trying to ‘save face’ or respecting an incorrect opinion just to keep peace.

The Chinese culture stresses more on ‘keeping or saving face’ than creating confrontational situations. The cultural protocol advises keeping quiet and respecting the other person’s opinion though it may seem incorrect or invalid. Criticism, boasting, bringing up controversial topics and enforcing personal opinions is not encouraged.

In America, when a group of friends go out for a meal or for drinks, it is expected that everyone splits the check and pays equally, or each person pays for what he or she had. Also, waiters wait for a few minutes before asking for the order, so as to give the customers some time to decide what they want. It is also customary to tip the person who served you a specific amount in order to show your appreciation.

In China, if a group of friends meets for a meal in a restaurant, it is expected that the one who invites the others, or the one who makes this plan is the one who picks up the tab. In case there is no particular person who has organized the dinner, someone or the other at the table has to insist upon paying for the meal. Splitting the check is not expected. It is, however expected that customers order as soon as they are seated, and tips are not really customary.

Just like the two cultures have their differences, they also have some characteristics that are similar to one another.

The American culture fiercely values and demands punctuality in every area of life, be it at work, in school, or anywhere else. It is expected that individuals reach their destinations on or even a little before time, but not even a little late. A laid-back attitude is generally not tolerated when it comes to time management.

Decisions Based On Consensus

In American culture, particularly in business, many decisions are taken based upon a consensus which ensures that every person in that team or group agrees with the decision. This is done so as to not impose any authority on the team members and to not make the decision-making process an authoritative one.

In Chinese culture, decision-making is based upon consensus too. It is a key aspect of the subtle, indirect communication that is encouraged so as to avoid any confrontational situations as well as misunderstandings and conflicts regarding a particular action.

From what we have seen above, we can rightly conclude that both these cultures are fascinating and unique in their own right. Please note, the differences mentioned in this article are not meant to offend or hurt anyone’s sentiments. There is no right or wrong when it comes to assessing cultures, and in fact, there shouldn’t even be any comparison between two cultures, because in the end, we’re all the same, aren’t we?