Facts about Flamethrowers Used During World War I

The fear of fire is deep-rooted in the human psyche, and the flamethrowers used during World War I capitalized on this very fact. In this Historyplex article, we put forth some facts about this weapon, which, despite being in the developing stages back then, had a crucial role to play in the infamous trench warfare of WWI.

Home / Uncategorized / Facts about Flamethrowers Used During World War I 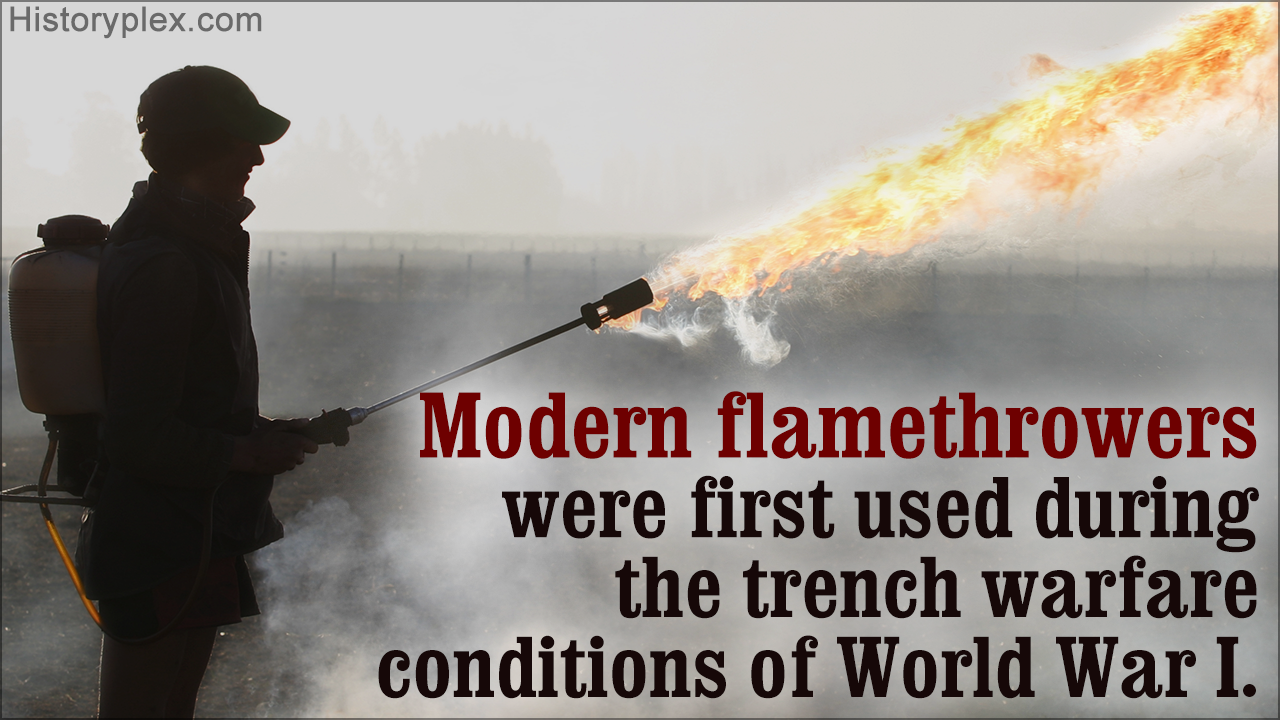 The fear of fire is deep-rooted in the human psyche, and the flamethrowers used during World War I capitalized on this very fact. In this Historyplex article, we put forth some facts about this weapon, which, despite being in the developing stages back then, had a crucial role to play in the infamous trench warfare of WWI.

In April 2014, a flamethrower was reportedly used to execute a North Korean official, after branding him an ‘enemy of the state’.

When we talk about weapons used for the first time during World War I, we speak about tanks, submarines, and even poison gas. However, there is one weapon which we miss out on, or rather fail to give due respect to. We are talking about the flamethrower.

Well, before the Brits introduced tanks to combat the stalemate-inducing trench warfare of World War I, Germans had an effective answer to it in the form of flamethrowers. Fire was no doubt used as a weapon by the Byzantines and Chinese long before the Germans invented flamethrowers, but nothing put it in the spotlight like this German invention did.

Flamethrowers were widely used in World War II, but their first use can be traced to the trench warfare conditions of World War I. In course of this war, the Germans launched more than 650 flamethrower attacks on the Allied Powers―the British and French in particular. Inspired by the success of German WWI flamethrowers, the Brits and French came up with their own versions of this weapon. Given below are some interesting facts about the crude but highly effective flamethrowers used during World War I.

► The modern flamethrower was invented by a German scientist, Richard Fiedler. He got his invention patented on April 25, 1901. There were two variants of this weapon: (i) Kleinflammenwerfer or Kleif and (ii) Grossflammenwerfer or Grof.

► The Kleinflammenwerfer was smaller and lighter of the two, which made it portable. It was designed to be used by an individual. The range of this flamethrower, which was used during World War 1, was 20 yards (19 meters).

► The Grossflammenwerfer was larger and, thus, was not suitable for use by a single person. Besides the size, the fact that it was expensive in terms of fuel usage, was also a major disadvantage.

► The Grossflammenwerfer did have some advantages though. For starters, its maximum range was twice that of the Kleinflammenwerfer. Additionally, it had the ability to sustain flames for a whole forty seconds.

► As the modern flamethrower was invented in Germany, it isn’t surprising that its English name, flamethrower is inspired by its German name, Flammenwerfer.

► The German army took Fiedler’s device seriously only in 1911 and created a specialist regiment of twelve companies equipped with it.

► On February 26, 1915, the Germans used it for the first time during World War I against the French. Some sources suggest that its use in the war began in October 1914 in the southeastern sector of the Western Front.

► The first notable use of flamethrower came in the form of a vicious attack on British trenches at Hooge in Flanders on July 30, 1915. More than 750 Brits including 31 officers lost their lives over the course of two days in this conflict.

► While most of the casualties in Hooge were attributed to direct fire from conventional weapons, it’s worth noting that it was the use of flamethrowers that flushed them out in the open.

► The success in Hooge prompted the German army to deploy flamethrower-equipped regiments across several other battlefronts. It was the success of this device that made the Germans overlook its disadvantages.

► It was a matter of time before the British began working on their own flamethrowers. They built four, out of which two were destroyed by enemy fire. The two that remained had an impressive range of 90 yards. The Brits put their flamethrowers to use on July 1, 1916. They were plagued by the same flaws that plagued the German flamethrowers.

► An engineer in the British Army, William Howard Livens invented the Livens Projector. It was a simple mortar-like device designed to throw drums filled with inflammable or toxic chemicals. The Brits attacked the Germans of using the Livens Projector during World War I.

► The French were not far behind. They soon developed their own flamethrower, which was better than that of the Germans. It was used in trench warfare towards the end of the World War in 1917 – 18.

► In 1917, the Germans developed a modified version of their flamethrower. This self-igniting model was named the Wechselapparat or Wex.

► As for the United States, it did not join World War I until 1917, and even after it joined, it did not develop a flamethrower during this war. During World War II, however, the Americans came up with a highly sophisticated flamethrower, which was way better than the crude devices used in the first war.

Despite its advantages, the flamethrower was not an astounding success during World War I. It had some disadvantages of its own. It had a limited range, for instance, and the fact that it was difficult to carry it around was also a major issue. It was a matter for time before the Allied powers realized that they simply had to maintain safe distance from German flamethrower operators. That put the operators at a disadvantage now, as they became easy targets.

Like the French, even other nations worked on their respective devices over the course of the next couple of years. Even the United States joined in with their own variants, i.e., M1 and M1A1 flamethrowers in the beginning of World War II. The end result was more advanced flamethrowers, which were widely used in World War II―notably in the form of flame tanks.