The American retaliation post-9/11, which led to them invading Afghanistan in order to fight the Al-Qaeda, is known as Operation Enduring Freedom. Read this Historyplex article, to know more about this hugely important military operation. 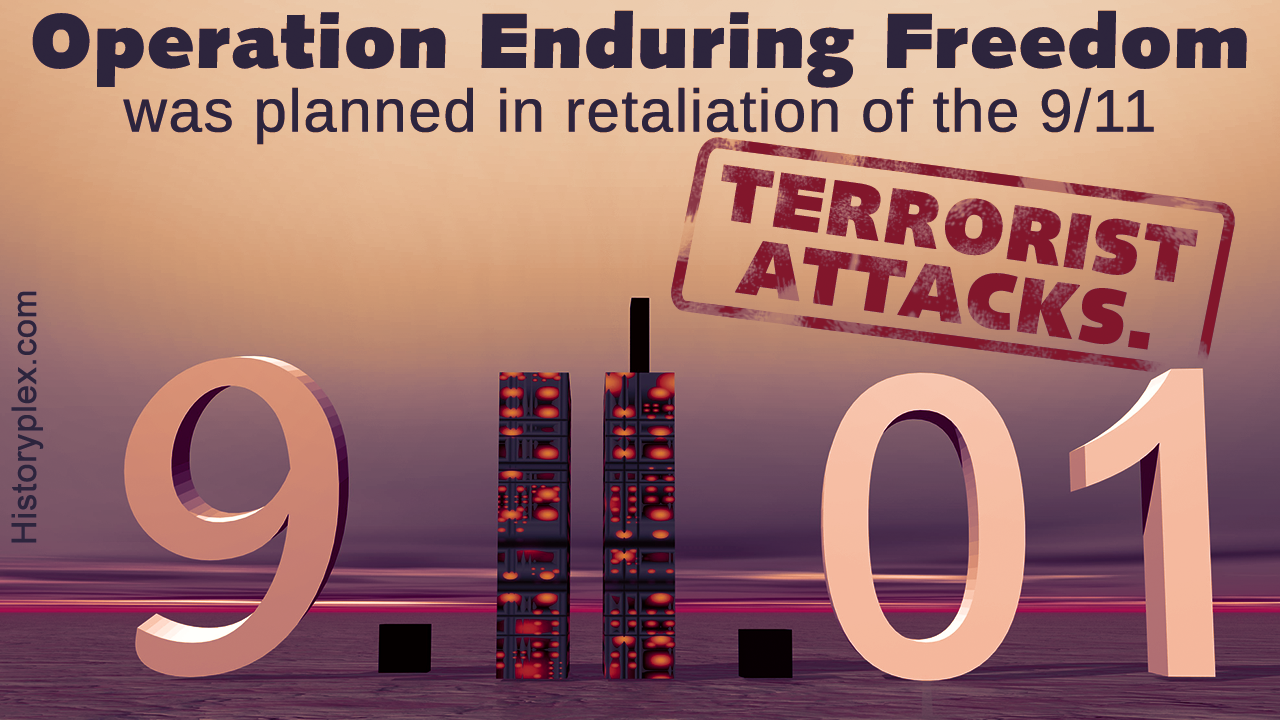 The American retaliation post-9/11, which led to them invading Afghanistan in order to fight the Al-Qaeda, is known as Operation Enduring Freedom. Read this Historyplex article, to know more about this hugely important military operation.

The terrorist attacks of September 11, 2001, gave a slumbering Western world a rude awakening. It was an attack, not just on a nation, but on the “icons of military and economic power” of the most powerful nation in the world―a nation considered (rightly or wrongly) to be the upholder of so many of the morals foundational to Western civilization.

Al-Qaeda, an extremist Islamic organization, hijacked four American airplanes, crashing two into the World Trade Center, one into the Pentagon, in addition to one failed attempt that resulted in the plane crashing in Pennsylvania. The attack took almost 3,000 lives.

It forced the U.S. to stand up and take notice of the threat of Islamic terrorism, and Operation Enduring Freedom was launched in response. Afghanistan, the abode of the leader of Al-Qaeda, Osama bin Laden, became the center of the operation. Here’s some info and facts about the timeline of this operation.

As it became clear that the majority of the Al-Qaeda training happened in Taliban-controlled regions of Afghanistan, it became necessary to eradicate the problem at its roots. The Taliban government, not recognized as the official government of Afghanistan by any Western country (and by only three countries in total), offered to give up Osama bin Laden to a third country if the U.S. could supply proof that he was involved in the 9/11 attacks. Rejecting this offer from an unrecognized and coercive government that had provided safe haven for Laden and Al-Qaeda, the American and British Forces began military intervention in October 2001.

This sequence of events led to Saudi Arabia and the UAE retracting their recognition of Taliban as the government of Afghanistan, leaving Pakistan as the only country in the world still supporting their rule over Afghanistan.

On October 7, 2001, the U.S. declared that it had initiated military action in Afghanistan. The action began with airstrikes, which continued for five days, on the Afghan region occupied by Taliban and Al-Qaeda.

The intention of the offensive was to capture Mazar-i-Sharif, a tactically important city in the north of Afghanistan. It was the last major city in Afghanistan to fall to the Taliban rule, and its fall in 1998 had led to Pakistan, and later Saudi Arabia and the UAE, recognizing the Taliban as the rulers of Afghanistan. Capturing it would provide a road and air inlet for support for the Western forces. It would also allow humanitarian efforts to alleviate a potential famine in the region surrounding Mazar-i-Sharif. The forces could then concentrate on the main hub of Taliban activities―Kandahar.

Despite the natural and human (anti-aircraft defenses) risks in landing personnel in the mountainous region around Mazar-i-Sharif, an American Special Forces team joined a local warlord, General Dostum. With his help, the SF team was able to call in close air support. The air support, which remained influential in the war due to the unfamiliarity of Taliban forces with American military tactics, decided several subsequent battles. On November 9, 2001, General Dostum and Ustad Atta Mohammed Noor’s forces took Mazar-i-Sharif.

Mazar-i-Sharif’s airbase allowed the U.S. forces to consolidate their position and establish the first real base in Afghanistan.

The loss of Mazar-i-Sharif was catastrophic for the Taliban, who couldn’t access their usual supply centers further north. The victory was slightly surprising even to the American high command, who had assumed it would take at least until 2002 to take the crucial city.

Demoralized by the loss of Mazar-i-Sharif and faced with the advancing Northern Alliance and U.S. armies, the Taliban fled Kabul, Afghanistan’s capital city, in the night of November 12, 2001. The next day, the little resistance installed in the city was defeated, and the Northern Alliance took over the city. As mentioned in Time, this unexpected reluctance to stay on and fight may have been due to the fact that many of the Taliban soldiers in these cities were not Afghan (who had more motivation to stay and fight), but Pakistani, Chechen, and Arab recruits.

This double blow led to further losses for the Taliban on November 14 and 15, especially in the north of the country and along the Iranian border. Important cities such as Herat and Jalalabad were captured by the Northern Alliance, and the remaining Taliban forces converged at Kunduz, the last major Taliban outpost in the north.

At this stage, the difference in the objectives of the U.S. Army and the local Northern Alliance started to come to the fore. American interest lay primarily in the destruction of Al-Qaeda, with the Taliban being, in simple terms, the party caught in the middle. For the Northern Alliance, the Taliban was the primary enemy, and their nationalist interests took precedence.

This split led to the two forces pursuing different objectives after this stage. The U.S. forces concentrated on Tora Bora, where top Al-Qaeda officials, allegedly including Laden himself, were hiding; the Northern Alliance, meanwhile, laid siege to Kunduz, the last remaining stronghold of the Taliban.

Kunduz eventually fell to the Northern Alliance on November 26, but not before Pakistan assisted the Taliban by airlifting several of their trapped men to safety. This highly controversial move by Pakistan is known as the Airlift of Evil. This left Kandahar as virtually the only Taliban stronghold in Afghanistan.

Assisted by local warriors led by Hamid Karzai and the pre-Taliban governor of Kandahar, Gul Agha Sherzai, the Northern Alliance pressed on to Kandahar. They were assisted by Camp Rhino, a Forward Operating Base of about 1,000 U.S. Marines. On December 7, the Taliban commander in Kandahar, Mullah Omar, escaped Kandahar, leaving a free path for the opposition to make their way into the city. The Afghan forces took control of the city, while the Americans established a base around the city’s airbase.

Meanwhile, around the start of December, Tora Bora was being bombed (including large bombs such as the daisy cutter) by the U.S. Air Force. Its mountainous region and numerous caves provided easy hiding places for the Taliban forces. However, by December 17, all the caves had been captured.

Osama bin Laden was claimed to have been in Tora Bora, and his voice was supposedly heard over the radio, but he was never seen, and, if present, he managed to avoid capture by escaping into Pakistan.

After the decisive victory at Tora Bora, an interim government, headed by Hamid Karzai, was installed in Afghanistan.

Operation Anaconda, taking place from March 2 – March 19, 2002, was one of the largest battles of this war. About 2,700 men, including both Western and Afghan forces, were shifted to this assignment. Nearly 1,000 Taliban and Al-Qaeda militants were thought to be hiding there. Apart from the immediate tactical and political aftereffects, this operation was notable for having the longest sniper shot ever recorded at that point. Corporal Rob Furlong of the 3rd Battalion Princess Patricia’s Canadian Light Infantry set the record, shooting a Taliban RPK machine gunner 2.43 km (1.51 mi) away.

Defeated but not eradicated, the Taliban regrouped in 2003, and started to hit back at the occupant forces through ambushes and IEDs. Pakistan’s tribal areas were the base for much of these operations, and Pakistani military actions against the insurgents were ineffective. Over time, Taliban once again became quite powerful in the region, particularly in the Dai Chopan district of the Zabul province. After more than two years of fluctuating success through covert operations, the insurgency was finally quashed in August 2005. Once again, the U.S. Air Force proved decisive in the week-long battle.

In early 2006, the NATO International Security Assistance Force (ISAF) gradually began to take over military responsibilities in the area. In 2010, NATO declared that the international military corps would leave Afghanistan by 2014, and that the control of the country would be handed over to the Afghan Army and police force.

The most important development in the War on Terror happened on May 2, 2011, when U.S. Navy SEALs stormed Osama bin Laden’s hideout in Abbotabad, Pakistan, and killed the leader of al-Qaeda. With the proximal reason of the War on Terror, which had been initiated in response to the 9/11 attacks, now fulfilled, U.S. President Barack Obama declared that 10,000 US troops would leave Afghanistan by the end of 2011, with 23,000 to follow in 2012. Other NATO participants in the ISAF also made similar promises, with varying number of troops and deadlines. All the troops are expected to retreat by 2015. The cost of stationing troops in Afghanistan, which had reached a high of USD 6.7 billion per month, is considered to be a major factor in the USA’s decision to gradually pull out.

The War on Terror ended Taliban rule in Afghanistan, and severely destabilized Al-Qaeda. This is a lasting boon of Operation Enduring Freedom – Afghanistan. The unique combination of the U.S. Special Forces and air force, working in conjunction with the Northern Alliance army, familiar with the local conditions, was instrumental in achieving this victory. It is hoped that this operation, along with other operations in the Operation Enduring Freedom series, will abate and eventually eliminate terrorism from the face of the earth.