Sacagawea was a Native American woman who guided the famous Lewis and Clark expedition. Historyplex will give you a brief biography of this outstanding lady. 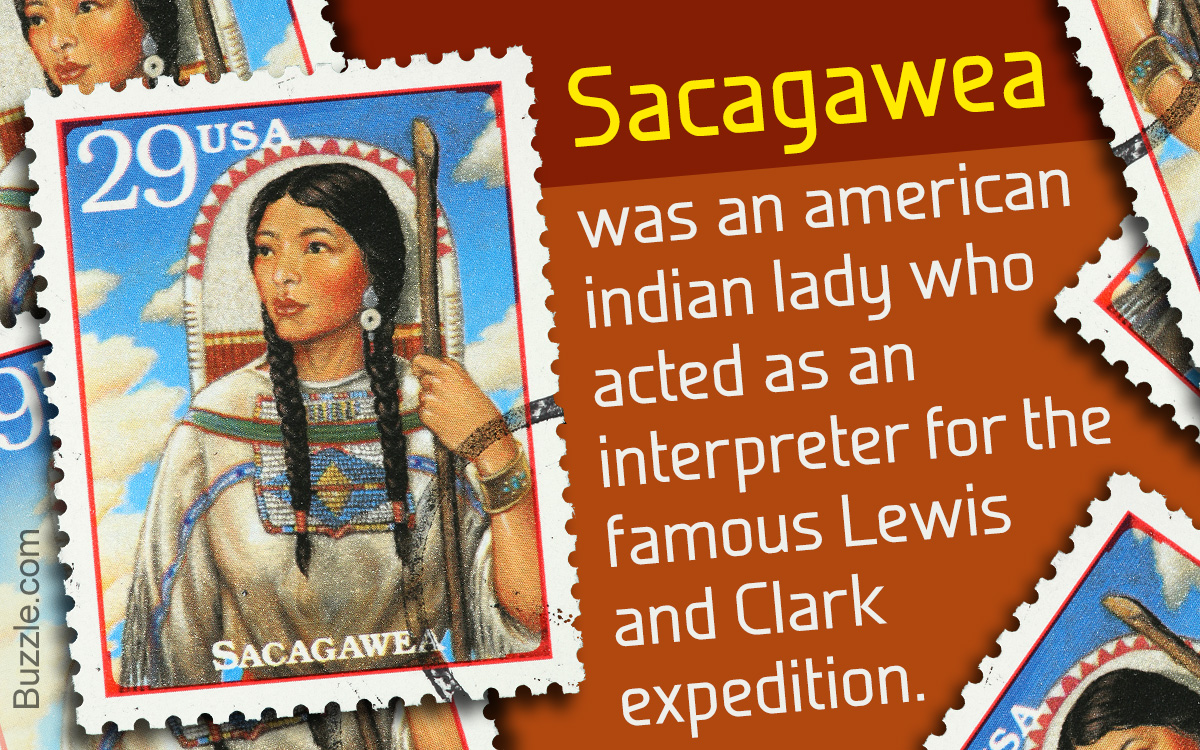 Sacagawea was a Native American woman who guided the famous Lewis and Clark expedition. Historyplex will give you a brief biography of this outstanding lady.

Sacajawea proved a valuable guide on the return journey. She remembers trails from her childhood. The most important trail was a large road. It passed through a gap in the mountain, which led to Yellowstone River. Today it is known as Bozeman Pass, Montana.
― Journal Entry of Meriwether Lewis, July 15, 1806

One of the most famous American Indian women to have ever walked the Earth, Sacagawea, also often spelled as Sakakawea or Sacajawea was a lady who made to the first ever organized scientific exploration to the American West. She belonged to the Lemhi Shoshone tribe whose members traditionally resided in the valley of the Lemhi River in Idaho.

Owing to the fact that Sacagawea made it onto the famous Lewis and Clark Expedition, a.k.a. Corps of Discovery Expedition (1804 – 1806) and ended up playing a pivotal role therein, she claims place among America’s folk heroes today, and is often portrayed as a woman with outstanding abilities who single-handedly guided a massive expedition into a previously unexplored territory. In this Historyplex write-up, we will have a brief look at Sacagawea’s biography and timeline.

► According to the very limited historical sources that we have at our disposal, Sacagawea was born in the year 1788 in Idaho’s Lemhi County.

► She was the daughter of the chief of the Lemhi Shoshone tribe, but not much is known about her parents and other family members.

► In 1800, another Native American tribal group, called Minnetarees got into a fight with the Lemhi Shoshones. The resulting battle claimed the lives of several people from Sacagawea’s tribe.

► Sacagawea and other girls from her tribe were taken captive by the Minnetarees to the Hidatsa, near what is now Washburn in the state of North Dakota. At that time, she was about 12 years old.

► Just about a year later, when she was 13, the Minnetarees sold Sacagawea to a Quebecer trapper named Toussaint Charbonneau, who then married her.

► While the more popular account tells us that Sacagawea was sold to her husband, some sources also hold that she was, in fact, won by Charbonneau while gambling.

► In 1804-05, at the age of 15, Sacagawea was pregnant with her first child. This was around the same time that the Corps of Discovery arrived near her village.

The Lewis and Clark Expedition

► Captains Meriwether Lewis and William Clark, who were heading the expedition, interviewed numerous trappers from Sacagawea’s village as well as from other nearby villages, as they were looking for a guide and interpreter for their expedition to the other side of the American Rockies.

► When the two Captains found out that Charbonneau’s wife could speak the Shoshone language, he, along with Sacagawea, were appointed as the guide and interpreter, respectively, for their expedition up the Missouri River.

Sacagawea and the Lewis and Clark Expedition

► Despite being pregnant at that time, Lewis and Clark recruited Sacagawea for the expedition, as they believed that her knowledge of the Shoshone language would help them during the journey. This proved to be one of the wisest decisions taken by the two Captains.

► One week after their recruitment, Charbonneau and Sacagawea left their home and moved into Fort Mandan, the encampment in which the two Captains were staying. It was located on the Missouri River, about 12 miles away from the present-day Washburn city in North Dakota.

► According to William Clark’s journal that was later retrieved, we know that Sacagawea was nicknamed Janey by the Captain.

► On 11 February 1805, while still at Fort Mandan, Sacagawea gave birth to a baby boy, who was named Jean-Baptiste Charbonneau. Lewis, Clark, and all the other European expeditioners who accompanied them, nicknamed the little boy as “Little Pomp” or “Pompy”. From the records of the expedition, we find that Sacagawea carried the boy on her back throughout the quest.

► Finally, after all the necessary arrangements were made, the expedition left Fort Mandan in the April of 1805. Sacagawea proved to be an outstanding asset for the expeditioners in more ways than one.

► On May 14, 1805, their boat capsized. While many items, including food and clothing were lost, Sacagawea did succeed in rescuing the journals and other records of Lewis and Clark. Owing to her quick action and bravery, she was not only praised by the expeditioners, but on May 20, 1805, they also named the Sacagawea River in her honor.

► “Janey” was incredibly skilled in finding edible plants. Therefore, from time to time, she could provide the expeditioners with food.

► Moreover, Sacagawea with a child on her back, was also looked upon as a symbol of peace, especially in the Native American strongholds. A group of foreigners, traveling with a woman and a child seemed less suspicious than one in which there were only men.

► Joining the expedition proved to be an extremely profitable venture even for Sacagawea. She was able to reunite with her long lost family, courtesy the Lewis and Clark expedition. During their journey into the American West, they came across a group of Shoshone Indians, who did behave in a hostile manner initially. However, soon enough Sacagawea realized that the leader of the group was, in fact, her own brother Cameahwait. It was not only a very emotional family reunion, but Sacagawea was also able to barter horses from the Shoshones, so as to enable the expeditioners to cross the Rocky Mountains.

► In November 1805, the expedition finally reached the Pacific coast. Here, it was decided to build a winter encampment, wherein the people of the expedition would stay for the season. Sacagawea was one of the few people who were allowed to cast their vote with regards to where the encampment would be built.

► Ultimately, Fort Clatsop was constructed in present-day Astoria in the state of Oregon. They stayed in the fort till the March of 1806, after which, they began their return journey.

Sacagawea’s Life After the Expedition

► For three years after they returned from the expedition, Charbonneau, Sacagawea, and their son lived among the people of Hidatsa tribe. In 1809, William Clark invited them to move to St. Louis, Missouri and settle there.

► They accepted the invitation, and Clark took the responsibility of their son’s education upon himself. The boy was subsequently enrolled into the Saint Louis Academy boarding school.

► Sometime in 1811, Sacagawea gave birth to her daughter, who was named Lizette. However, not much is known about Lizette’s life, except that she was one of the few people who survived the Indian attack on Fort Lisa in 1812.

► Historical documents tell us that Sacagawea died of an unknown illness in the year 1812. William Clark’s journal also confirms this to a certain extent.

► However, in the year 1884, a woman claiming to be Sacagawea died, and since not much has been known about her post-expedition life, it was difficult to prove whether the claimant was actually Sacagawea or not. So, there is quite a controversy with regards to the actual death year of Sacagawea.

As a Native American woman who helped the explorers in their quest of the American West, Sacagawea occupies a prominent place in American history. Apart from being a guide throughout the expedition, it was her mere presence with the party that proved to be more rewarding to them, as it confirmed their peaceful and non-harmful intention, especially to the natives who, otherwise, would have been very hostile and unwelcoming. It was owing to her unmatched contribution during the expedition that several statues and memorials were erected in her honor all across the United States, and she was also portrayed in movies and fiction. There is indeed rarely any other American Indian woman as famous as Sacagawea in the country’s history.