World’s Most Famous Magicians Who Never Failed to Enthrall Us

Magic, as a performing art, has a long history. For many years, magicians have been entertaining people with their tricks and illusions. The first evidence of magic show comes from 2700 BCE Egypt. It was reportedly performed by a magician, Dedi, who did conjuring tricks such as decapitating a bird and then, reattaching the head thus, bringing it to life again.

Magic, as a performing art, has a long history. For many years, magicians have been entertaining people with their tricks and illusions. The first evidence of magic show comes from 2700 BCE Egypt. It was reportedly performed by a magician, Dedi, who did conjuring tricks such as decapitating a bird and then, reattaching the head thus, bringing it to life again.

“Abracadabra” and … Poof! The audience see a cute, white bunny, sticking its head out of a black top hat. People, and especially children, wonder where the rabbit came from; it seems as if it appeared suddenly out of thin air. While the audience try to figure out how this happened, the magician is ready with his next, even more awe-inspiring trick. Magicians are the performers of magic tricks or illusions for the entertainment of people. Their performances are held anywhere, from birthday parties to cruise ships and nightclubs, and are also aired on television.

Throughout the years, the art of illusion has come a long way, with a huge number of illusionists/magicians, making their mark. Though some of the most famous tricks such as cutting a pretty woman in half and then, putting the two halves back together, seem to work at all points in time, most successful magicians around the world, always have their own ways to set themselves apart. Here’s a list of some of the most famous magicians in the world.

Considered to be “the father of modern magic”, this French magician was a watchmaker in his early life. During the time, when magicians generally performed in fairs and marketplaces, he was the one who took the art of illusion, one step further. He performed in theaters and private parties, and became popular as a man for whom anything was possible.

He dressed in formal attire for his shows, like his audience. With his various tricks and illusions, he became so influential that in 1856, Napoleon III of France assigned him the task to pacify the religious tribes in French Algeria, a mission that he successfully accomplished. After this, he gave his last public performance in Marseilles, and retired. After retirement, he wrote several books on the art of magic.

Born in Budapest, this Hungarian-American stunt artist was famous for his absolutely intriguing escape acts. His original name was Erik Weisz, but he was so inspired by Jean Eugène Robert-Houdin that he went on to take his name and simply added an ‘i’ to it. During one of his initial tours to Europe, Houdini promoted himself as “Harry Handcuff Houdini”, and challenged the various police forces to try to keep him handcuffed and locked up, which they obviously could not manage to.

In many of his succeeding shows, he gave up the handcuffs, and went on to include chains, ropes, and straitjackets. In one of his most famous stunts, despite being buried alive, he managed to emerge on the surface, though in the state of near-breakdown. In 1917, Houdini became the President of the Society of American Magicians, and went on to expose all the fraudulent artists, and also those who presented pirated stunts.

He also acted in some movies, however, quit it, as acting failed to earn him enough money. He was also a qualified pilot, and wanted to become a first person to fly a plane in Australia, however, no such record has been attributed to him. In the course of his career, he also wrote numerous books, some of them explaining his own escape stunts.

Perhaps the most popular British magician till date, David Devant is known for his witty performances, with an element of subtle humor. He was invited thrice to participate in the Royal Command Performances, and it is said that during his first one, Queen Alexandra of Denmark laughed aloud. He performed with his famous “Magic Kettle”, in which he produced any kind of alcoholic beverage that his audience would demand.

He is considered to be the master performer of his time, and also a pioneer of early British cinema in London. One of the first projectors in London was acquired by Devant. In 1906, he became the first President of the Magic Circle, a society of professional magicians. The society is based in London, and still celebrates his feats.

Protul Chandra Sorcar was a famous Indian magician, who gave several national and international performances in the 1950s and 1960s. He performed both, before live audiences as well as on television. One of his stage shows, “Indrajal” was popular the world over for its enchanting magic tricks based on simple laws of physics. Apart from India, Sorcar also performed in several countries such as Japan, USSR, and more than 70 others.

Owing to his outstanding contribution to the field of magic, he received several national and international awards and accolades including the Padma Shri and the title of Jadusamrat (Emperor of Magic) by the government of India, the Sphinx (Oscar of Magic) in 1946 and 1954, and The Royal Medallion by the German Magic Circle.

He was a famous Peruvian magician, best known for the various illusions that he created before the live audiences. Despite the fact that he performed different versions of the established illusions such as cutting a woman in two halves, what made him distinct from the other magicians of his time, was his use of fake elements like, blood. This made his illusions look more realistic than the others, and these tactics made him one of the highest paid magicians in the New York City.

He made several television appearances, and also hosted his own show, Chamber of Horrors. What was most outstanding about his performances was his style of singing and dancing during the show, which gave him great stage presence.

This American illusionist is by far, the most popular magician in the world today. He performs over 500 shows all across the world in a year and, according to the Forbes magazine, he is the most commercially successful magician in history. Known for his awesome combination of storytelling and magic, he has been conferred the title of a Living Legend by the US Library of Congress.

With 21 Emmy Awards, 11 Guinness World Records, a star on the Hollywood Walk of Fame, and a knighthood by the French government, Copperfield is one of the highest paid celebrities in the world. Some of his famous illusions include, levitating over the Grand Canyon, and walking through the Great Wall of China.

He is an American illusionist and an endurance artist, best known for his tricks of close-up magic. He started his career as a street magician, focusing on simple card acts. He then went on to make stage and Television performances, where he popularized endurance feats as a new trend in the world of magic. In one of his most famous television specials titled, “Frozen in Time”, he encased himself in a block of ice for 61 hours, 40 minutes, and 165 seconds.

He is a British illusionist, mentalist, hypnotist, writer, and a painter. He is well-known for his several mind-reading acts, performed in his television Show, “Derren Brown: Mind Control”. Owing to his outstanding abilities of mind-control and mind-reading, some critics claim that he may be indulging in paranormal practices. However, a skeptic in Brown not only disregards such claims, also denounces those who believe in such things. He has also authored several reference books for magicians.

An American illusionist, Criss Angel is also a writer and a musician. He became more famous with the soaring popularity of his television series, “Criss Angel Mindfreak”, wherein he performed several difficult stunts. He is the creator of MagicPlace.com, a website, exclusively dedicated to everything about magic. Angel also owns a charity known as BeLIEve Foundation ‘Believe Anything is Possible – A JDS Foundation’, which aims to help the underprivileged.

Also known as Magnus,
McBride is a Las Vegas based American magician. His stage performances are marked by a subtle blend of kabuki, a Japanese theater form, and traditional magic. He is also one of the foremost proponents of Bizarre Magic that lays more emphasis on storytelling and word play, rather than the performer’s manual skills. In 1992, he founded the McBride Magic & Mystery School in Paradise, Nevada, which offers courses in stage magic and healing arts.

Today, it is the foremost institution teaching magical arts. Owing to his contribution to the field of magic, McBride has won several awards, and has also set a number of Guinness World Records.

The manner in which magicians display their talents before the public is absolutely astonishing. Each and every famous magician has his own unique, signature trick that hooks his/her audiences to their seats. Nevertheless, all of them have something in common-all of them are very confident about their tricks. Each of them knows that he/she can actually make the people believe in the existence of magic, at least for a short while. 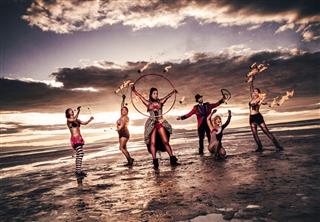 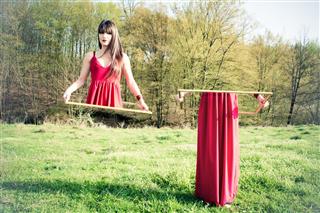