36 Notably Popular and Famous Trios From Around the World

The first thoughts that come to mind when we hear the word 'Trio' are The Bee Gees, The Three Musketeers, The Three Stooges, and the likes. A trio can be in the reference of absolutely anything which exists in the number three, and has to be a group of identical or similar objects. The objective of a trio is mainly similar things collected together for the same purposes. 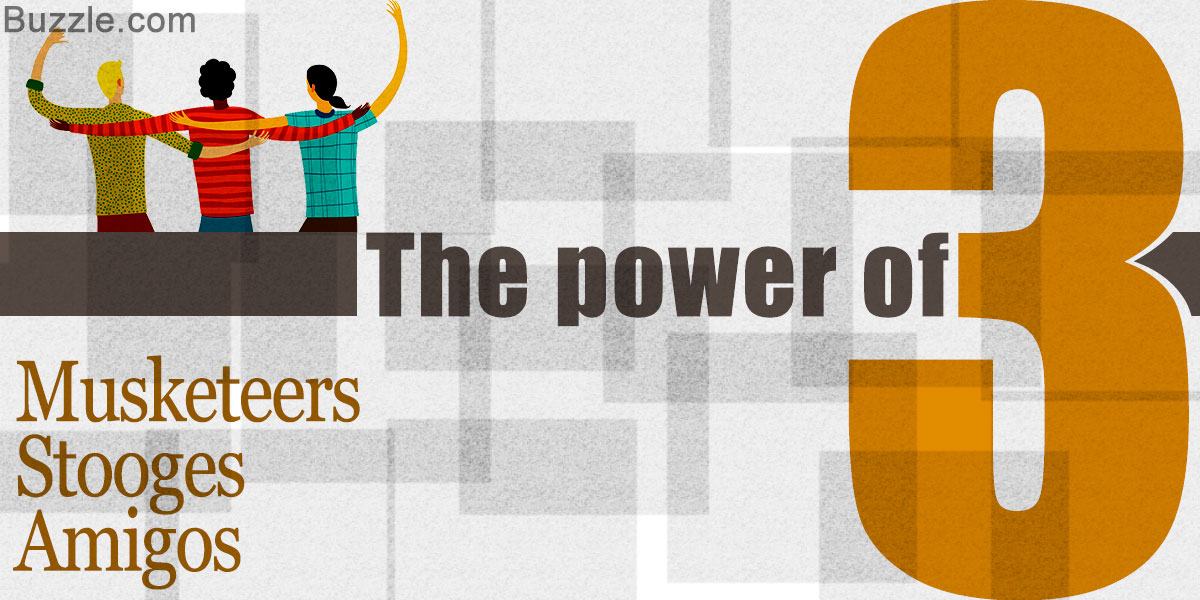 The first thoughts that come to mind when we hear the word ‘Trio’ are The Bee Gees, The Three Musketeers, The Three Stooges, and the likes. A trio can be in the reference of absolutely anything which exists in the number three, and has to be a group of identical or similar objects. The objective of a trio is mainly similar things collected together for the same purposes.

There are many trios that have existed in random aspects – like famous people, things, objects, and words. These trios have identities of their own, but are better identified when they are associated with each other. Through the history of mankind, some of these famous trios have become well-known, and are used only with each other’s context.

Moe, Larry, and Curly made up one of the most famous 20th century acts of all time – The Three Stooges. A vaudeville group created by comedian Ted Healy in the early ’30s, the Three Stooges consisting of Moe Howard, Larry Fine, and Curly Howard became the face of American comedy for more than 2 decades. Their short films and comedy remain immensely popular even today.

The three kings who paid their respects to Baby Jesus brought three famous gifts. Also known as the Three Wise Men who brought gifts of frankincense, gold, and myrrh, they are traditional figures at Christmas celebrations all over the world.

One of the most famous trios of opera music, Spanish singers Plácido Domingo and José Carreras collaborated with the Italian Opera legend Luciano Pavarotti to form The Three Tenors. They performed a series of concerts from the early 1990s to the 2000s, and are often credited for the revival of classical music in the late 20th century.

The famous comedy act of the early 20th century, and also one of the pioneers of the vaudeville style of comedy, the Marx brothers Chico, Harpo, and Groucho gained tremendous success as traveling artists and also film stars.

A trio of brothers formed one of the most successful music groups ever – The Bee Gees. Barry, Robin, and Maurice Gibb were the lineup for the group, which gave the world super hits such as ‘Staying Alive’, How Deep is Your Love’, and ‘Night Fever’. They have sold over 220 million records worldwide, and are enshrined in the Rock and Roll Hall of Fame.

Contributing to the development of the American music industry in its formative years in the ’50s, the Kingston Trio were Dave Guard, Bob Shane, and Nick Reynolds. Their folk-influenced pop music records were propelled by the LPs of the time, and sold many millions of copies.

The original Charlie’s Angels lineup is still regarded by many as the best one, although the trio of Cameron Diaz, Drew Barrymore, and Lucy Liu are famous in their own right. The original angels were Kate Jackson, Farrah Fawcett-Majors, and Jaclyn Smith. The show was extremely popular around the world, and spawned a whole range of franchise products, one of the first television shows to do so.

Ranked amongst the 100 funniest movies of all time, Three Amigos was a 1986 film starring Steve Martin, Chevy Chase, and Martin Short. Although not a huge box office success, the film, in subsequent years, has made it to cult status among comedy lovers the world over.

The ‘Three Witches’ from ‘Macbeth’

The weird sisters play an important role in one of William Shakespeare’s greatest plays – Macbeth. They haunt Macbeth and tell him scary prophecies, first of his greatness as the future king, and later of his downfall and death. They have been widely represented in literature and media, from paintings by Henry Fuseli in the late 18th century, to a modern Disney series called Gargoyles in 1994.

The super-group split up in 2006, but while they were together, Beyoncé Knowles, Kelly Rowland, and Michelle Williams were a force to reckon within the music industry. They sold over 50 million albums, and consistently feature in lists of all-time greatest musical acts.

A trio of young cute animated ducks, Huey, Dewey, and Louie are nephews of Donald Duck, another lovable Disney character. Created by Ted Osborne and Al Taliaferro, they were introduced in a newspaper comic strip in 1937, and have appeared in many cartoons, movies, and television series over the years.

From the novel of the same name by the great French writer Alexandre Dumas, comes the “The Three Musketeers” – Athos, Porthos, and Aramis. They team up with the protagonist d’Artagnan, and set off on several exciting adventures.

Who wouldn’t know the most famous fictional trio of the 21st century. Harry Potter and his friends have fired the imagination of billions around the world. The books have sold millions of copies, and the movies have been among the highest-grossing of all time.

Better known as Goldilocks and the Three Bears, the bears in this story live in a wooden house in the forest. Goldilocks wanders into their home and sits in papa bear’s chair, eats baby bear’s porridge, and sleeps in the bed, before being discovered by the bears. Her fate differs in versions… she gets eaten too.

Another famous fairytale involves the three pigs, who build houses of straw, sticks, and bricks to stave off a hungry wolf. He manages to blow down two of their homes and eat the crap out of them, but the third pig with a house of bricks survives. When the wolf comes down the chimney to attack him, he traps him in a cauldron of boiling water, cooks him… and eats him. Pigs can be scary too.

Nat King Cole was one of the greatest jazz musicians of all time. His early career saw him playing the piano, with Oscar Moore on guitar and Johnny Miller on double bass. They were the King Cole Trio, and played at a host of venues, most prominently for the radio, and later achieved success with the newly-formed Capitol Records music label.

Little animated girls with hearts of gold and superpowers, ready to save the city and its mayor at any time of the day or night. Blossoms, Bubbles, and Buttercup, and their father professor Utonium, were the brainchildren of creator Craig McCracken, and staple fare for any Cartoon Network watching kid in the late 1990s.

Unarguably the most successful all-female music group of the early ’30s and ’40s, the Andrew’s Sisters, namely LaVerne Sophia, Maxine Angelyn ‘Maxene’, and Patricia Marie ‘Patty’, gained fame for their unique harmony singing, and sold over 75 million records in their nearly 40-year career.

Alvin and the Chipmunks

The Chipmunks were created by Ross Bagdasarian, Sr., as a musical group. Alvin is the leader, mischievous and full of spark, Simon is the intellectual, and Theodore the chubby cute simpleton. Together, they are amongst the most recognizable animated characters of all time.

The love triangle of the three most powerful people of the ancient world is well-known, both in history and arts. Their tragedy-marred lives remain the basis of many legends and stories over the millennia.

The most iconic video game character of all time, as also one of the oldest, Mario, his brother Luigi, and their arch nemesis Bowser, deserve a special mention on this list. Anyone born in the ’80s would know what an impact the dynamic plumber had on their childhood. Created by Shigeru Miyamoto, Mario has appeared in over 200 games, and is responsible for over 200 million units of sales, making Nintendo a household name.

Peter Pan was the creation of novelist J.M. Barrie, a boy who could fly and never get old, and lived on an island called Neverland. His trio is made of a fairy named Tinker Bell and Wendy Darling, a human girl whom he befriends in the book Peter and Wendy.

For all you Twilighters out there, the trio of Edward, Jacob, and Bella has become cult-like in the aftermath of the Twilight books, written by Stephanie Mayer. The movies have done extremely well too, popularizing them further.

The Good, the Bad and the Ugly

Sergio Leone’s greatest masterpiece is undoubtedly this 1966 story of three gunmen on a treasure hunt during the American Civil War.

There are few other trios which are not exactly people or fictitious characters. They are a combination of words, colors, and objects, which are often associated to each other in order to be understood better.

The Three Heads of Cerberus

Cerberus is a Greco-Roman mythological hell-hound with 3 heads, which guards the gates of hell in the underworld.

The three-strikes law stipulates that courts and governments in the United States should impose harsher punishment on people convicted of three or more crimes. This is akin to be given three strikes in the game of baseball.

Movies come in trilogies these days. Terminator, Lord of the Rings, Batman, and many more.

Derived from Aristotelian philosophy, the Classical Unities are unity of action, place and time, as applicable to rules regarding dramas and plays.

Basic rules of fire-safety also come in threes. Stop – to keep the flames from fanning, drop – to save your face, and body and roll – to put out the fire.

Three acclaimed films by Krzysztof Kieślowski, Three Colors: Blue, Three Colors: White, and Three Colors: Red, have been rated amongst the greatest trilogies of all time. Both Blue and Red hold a 100% fresh rating on Rotten Tomatoes.

The Three Jewel Temples of Korea

Representing the three jewels of Buddhism, Tongdosa, Haeinsa, and Songgwangsa are ancient temples in South Korea.

Faith, Hope, and Charity were three martyred saints of Christianity during the 2nd century AD. These were also the names of three Gloster Gladiator Royal Air Force fighters, which defended the island of Malta in the Second World War from the Italian Air Force.

Our understanding of the world was forever changed once Newton proposed his three laws of motion.

First Law: If an object is at rest, it remains so, and if it’s in movement, it will keep moving at a uniform velocity until it is affected by an external force.

Third Law: For every action, there is an equal and opposite reaction.

The classic American staple sandwich has three common ingredients along with ham, bacon, or chicken.

Famous cartoon mascots of the world’s most popular cereal Kellogg’s Rice Crispies – Snap, Crackle, and Pop are the cute gnome-like characters who have been on the Rice Crispies packaging since the early 1930s.

These trios are very often used by us in daily life as examples and illustrations, for explanations.