A length of 6,259 kilometers might explain the 'might' of the Great Wall of China. This is the approximate distance you would cover, if you drove between Washington DC and Las Vegas, and then back from Vegas to Texas. Let's uncover the story of the magnificent Great Wall which has been the pride of the Chinese for over 2200 years. 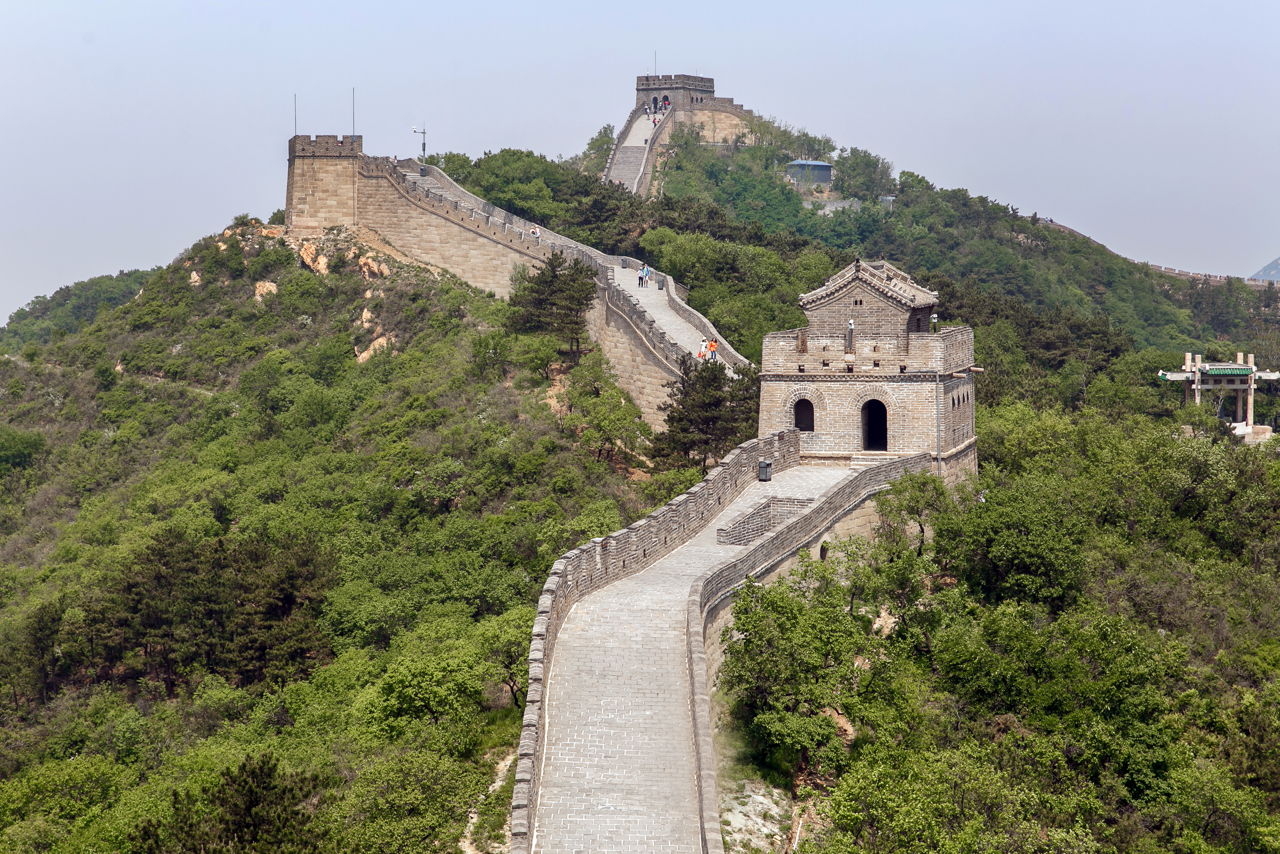 A length of 6,259 kilometers might explain the ‘might’ of the Great Wall of China. This is the approximate distance you would cover, if you drove between Washington DC and Las Vegas, and then back from Vegas to Texas. Let’s uncover the story of the magnificent Great Wall which has been the pride of the Chinese for over 2200 years.

The Great Wall of China is regarded as one of the greatest wonders of the world. It’s not usually that an emperor goes this far to protect his people and kingdom from the enemy. The beauty of the wall lies in the unification that it brings to the lives of the people, which is very well-reflected by the citizens of the People’s Republic of China in their spirit and will.

The wall stretches for about 6,259 kilometers from east to west. The stretch was built by slaves and prisoners of war, and also soldiers and local peasants were forced and drawn into the construction against their will. The work hours were extensive due to which many people died due to starvation and unhealthy work conditions. It is a popularly debated fact that the corpses were also used to build the wall, as human bones provide stability to a structure. An approximately 4-6 million people were put onto this mammoth task of building the wall, of which more than a million deaths have been assumed during the course of construction.

Built to its current form by multiple dynasties, it stood the test of time and had kept China safe from invasion until Genghis Khan attacked from areas where the wall construction was not continuous. During the course of time, some parts of the wall have either disappeared or are in a sorry state of affairs and expected to be down in a few decades. Let’s look at the timeline of events that led the Great Wall from being a protective barrier to becoming a wonder of the world.

The images are meant to represent the various stages of construction of the wall.

During the warring states’ period from the 5th century BC to 221 BC, the states of Qi, Yan, and Zhao constructed extensive fortifications to defend their borders. Built to withstand the attack of small arms such as swords and spears, these walls were made mostly by stamping gravel and earth between board frames. 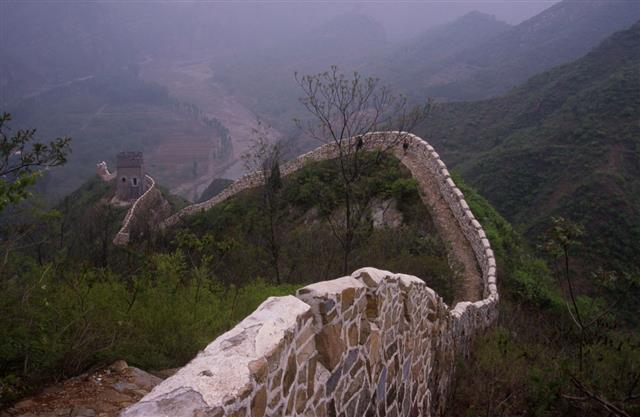 In order to strengthen his rule and defend the Huns in the north, Emperor Qin ordered connecting the walls once built by other states and also adding sections under his expense to strengthen the boundary. The long Qin’s wall thus started taking shape. It started from the east which is today’s Liaoning Province and ended at Lintao, Gansu Province. After subjugating and uniting China from the seven warring states, the emperor connected and extended four old fortification walls along the north of China that originated from about 700 B.C. Armies were stationed along the wall to defend the invading nomadic Hsiung Nu tribes north of China. Additions and modifications continued over the next millennium but the major construction of the ‘modern’ wall began in the Ming Dynasty and continued during their rule from 1368-1644 CE. 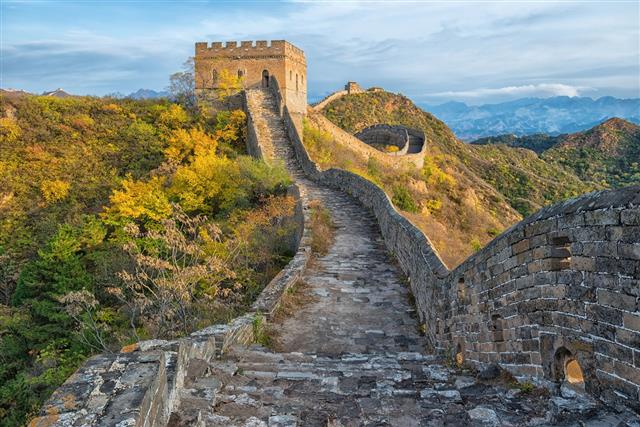 The Great Wall concept was revived again during the Ming Dynasty following the Ming army’s defeat at the hands of Oirats in the Battle of Tumu in 1449. The Ming had failed to gain a clear upper hand over the Mongolian and Manchurian tribes after successive battles, and the long-drawn conflict was taking a toll on the empire. The Ming adopted a new strategy to keep the nomadic tribes out by constructing walls along the northern border of China. Acknowledging the Mongol control established in the Ordos Desert, the wall followed the desert’s southern edge instead of incorporating the bend of the Huang He. During the Ming Dynasty (1368-1644), the Great Wall was enlarged to 6,400 kilometers and renovated over a 200-year period, with watchtowers and cannons added. 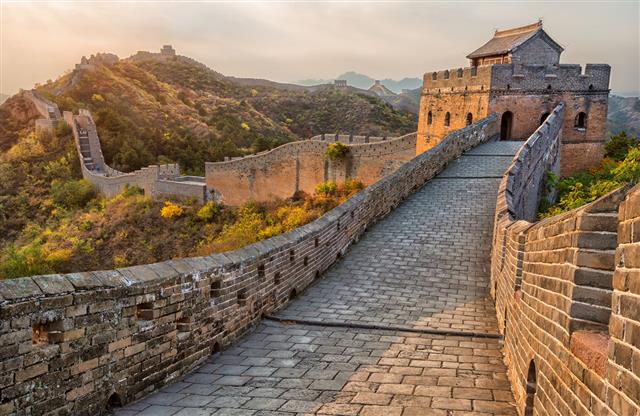 Construction and repairs of the wall were suspended. A wall was built in the south to protect the Chinese from the nomads and barbarians.

The wall as we see today, is after taking up a huge renovation of which the most important phase took place after it was declared a World Heritage Site in 1987 by UNESCO. The restoration and preservation initiatives are being taken up by the government and other non-governmental bodies like the International Friends of the Great Wall and The China Great Wall Society who clean the areas surrounding the most frequently visited areas of the wall and keep a close check on the structural maintenance.

Through Western contact with China from the 17th through 20th centuries, the fame of the Great Wall grew and so did tourism. It grew at a whopping rate after President Nixon visited the wall in 1972. Today, a portion of the Great Wall of China, about 80 km from Beijing, is host to about 6 million tourists every year.

Many historians have a view that by building a wall of this length, the manpower that went into it, and the deaths reported or assumed during the construction, it would have caused lesser casualties even if another kingdom would have attacked and gotten into a war with China. But from accounts of the Chinese, the wall stands as a representation of their unity and pride.