Largest Human Gatherings Around the World

Gatherings have the power to bring humans together for a common cause. Some are organized with the purpose of making people feel inspired, while some make people reflect on their lives. In this Historyplex article, we are going to tell you about some of the largest human gatherings in different parts of the world, which include those where people gathered for a social or political cause as well as those held for religious reasons.

Gatherings have the power to bring humans together for a common cause. Some are organized with the purpose of making people feel inspired, while some make people reflect on their lives. In this Historyplex article, we are going to tell you about some of the largest human gatherings in different parts of the world, which include those where people gathered for a social or political cause as well as those held for religious reasons.

The concert was made a part of the Guinness Book of World Records as not only one of the largest human gatherings, but also the largest live concert.

There are various reasons why humans gather in large numbers. They may come from different parts of the world and gather for a pilgrimage or come together to show respect to a public figure or pay a tribute to him. Some gatherings reflect the unity of the people of a nation or religion, while in some others, people gather to fight for a cause. Commonly, people gather in huge numbers for the funeral of a religious, political, or a public figure. And the other most common large human gatherings include pilgrimages.

Largest Human Gatherings in the World

The coronation ceremony of Queen Elizabeth II took place on June 2, 1953 in United Kingdom in London. There were many guests including prime ministers and ministers from all over the world. Over three million Brits from all parts of the country gathered on the streets of London to catch a glimpse of the queen. This event also makes as one of the largest peaceful human gatherings in the world.

C. N. Annadurai, popularly called Anna, was the former Chief Minister of Tamil Nadu, India. He was one of the most charismatic political leaders of south India. He was also a popular public speaker and writer. He died on 3rd February 1969. His funeral was attended by more than 15 million people and holds the world record for being one of the largest human gatherings for a funeral.

Gamal Abdel Nasser Hussein was the President of Egypt from the year 1956 until his death. He was a leader of the Egyptian Revolution of 1952 and introduced neutralist foreign policies during the Cold War. He died on September 28, 1970. About five million people attended his funeral at the Kubbeih Republican Palace and it is one of the largest funerals in Egyptian history.

Umm Kulthum was a popular Egyptian classical singer, songwriter, and actress between the 1920s and 1970s. She died on February 3, 1975. Her death was a shock for the entire nation. Her funeral procession became one of the largest human gatherings, with around 4 million Egyptians flocking the streets of Cairo to bid her goodbye. The star is still known as the greatest Arabic singer in history.

Benazir Bhutto was the 11th Prime Minister of Pakistan. She was the first woman in Pakistan to head a modern Muslim state. There was a procession of around 3 million people during the welcome of Benazir Bhutto in Lahore on April 10, 1986 after she returned from a long political exile in Europe.

Ayatollah Ruhollah Moosavi Khomeini was a religious and political leader of Iran. He was a powerful speaker and a very influential figure. He rose to fame during the 1979 Iranian revolution which overthrew the Shah of Iran. The news of his death put the entire country in grief and pain. For his funeral, around 10 million people gathered in Tehran to mourn for the death of their leader.

Roderick David Stewart is a British rock singer and songwriter. He is known as one of the best-selling artists of all time. He was born on January 10, 1945 and raised in London. The rock singer attracted a crowd of around 4 million people through his concert organized in Rio de Janeiro in 1994.

The 20th World Youth Day, a Catholic festival, was held in January 1995 in Manila, Philippines. It was the first time for an Asian country to host such an event. Pope John Paul II visited the country during the festival and presided over the event. Most of the people gathered there to see him. About five million youngsters attended the event. It was Pope John Paul II’s second official trip to the country. Youth pilgrims gathered there from different parts of the world to worship together and learn about each other’s cultures. It has been recorded as the largest Papal gathering in Roman Catholic history.

February 15, 2003 was a day of protests across the world in which people in over 600 cities expressed opposition to the imminent Iraq War. The protest in Rome involved around three million people, and is known as the largest protest. It has been enlisted in the 2004 Guinness Book of World Records as the largest anti-war rally in history.

The Boston Red Sox is an American professional baseball team based in Boston, Massachusetts. It competes in Major League Baseball. The 2004 World Series was Major League Baseball’s championship series and also the 100th World Series. The two teams were the American League champions Boston Red Sox and the National League (NL) champions St. Louis Cardinals. The Red Sox defeated the Cardinals by four games to none in the best-of-seven series, played at Fenway Park and Busch Memorial Stadium. The Red Sox held their World Series victory parade on October 30, which was attended by over 3 million people.

Pope John Paul II, the Supreme Pontiff of the Roman Catholic Church, served as a Pope from 1978 to 2005. His death was grieved by people worldwide. He died on April 2, 2005. His funeral took place on April 7 in front of St. Peter’s Basilica in Vatican City, Rome. It was attended by more than four million people, and is the largest gathering of Christians in history. A large number of political leaders also attended the funeral.

Sabarimala is a place for the world-renowned Hindu pilgrimage, which is situated in the Pathanamthitta district in Kerala. It is one of the largest annual pilgrimages in the world, with around 50 million devotees visiting annually, making it one of the very popular shrines. Sabarimala is known to be an ancient meditation place of the Hindu God, Ayyappan, where he meditated after killing the powerful demoness, Mahishi. On January 14, 2007, over 5 million pilgrims gathered there to get a glimpse of the deity.

The Hajj is an annual Islamic pilgrimage to Mecca in Saudi Arabia, and the largest peaceful human gathering of Muslims. It is mandatory for each and every adult Muslim to take this pilgrimage at least once in his life should his physical and financial capability allow. Millions of people visit Mecca for Hajj every year. It is estimated that over 3.16 million people had visited Mecca for Hajj in 2012 making it one of the largest peaceful human gatherings in the world. 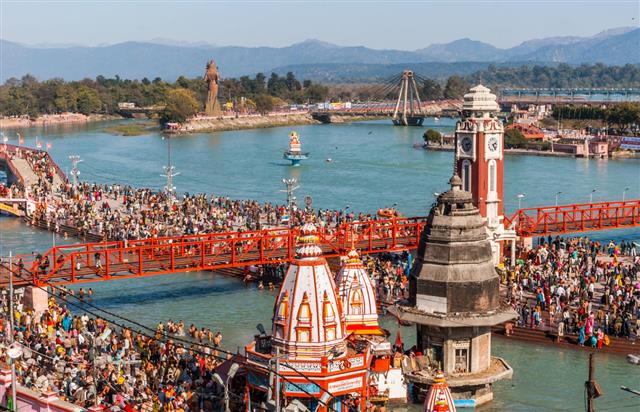 Kumbh Mela is a religious festival of the Hindus that is celebrated every three years in four rotating places which include Haridwar, Allahabad (Prayaga), Nashik and Ujjain. Thus, the festival is held every twelfth year at each of these four places. In this festival, Hindus come together to bathe in a sacred river. It is considered as one of the largest peaceful gatherings in the world. Around 30 million people gathered during the Maha Kumbh Mela of 2013 in Allahabad. It lasted for 55 days and 100 million pilgrims were expected to attend it.

Arbaeen is a Shia Muslim religious festival that takes place after a forty-day period of mourning following the death anniversary of Imam Hussein, who was the grandson of Prophet Muhammad and also one of the most revered figures in Shiite Islam, who was killed in the Battle of Karbala in 680 CE. The ceremony of Arbaeen that took place in the city of Karbala in 2014 was one of the biggest on record. About 18 million people made the pilgrimage to the city.