The Mexican Independence War began in the year 1810 and continued till 1821. It was a struggle to achieve freedom from the oppressive rule of the Spanish colonizers by the Mexicans. Here's more about the war that led to Mexico's freedom. 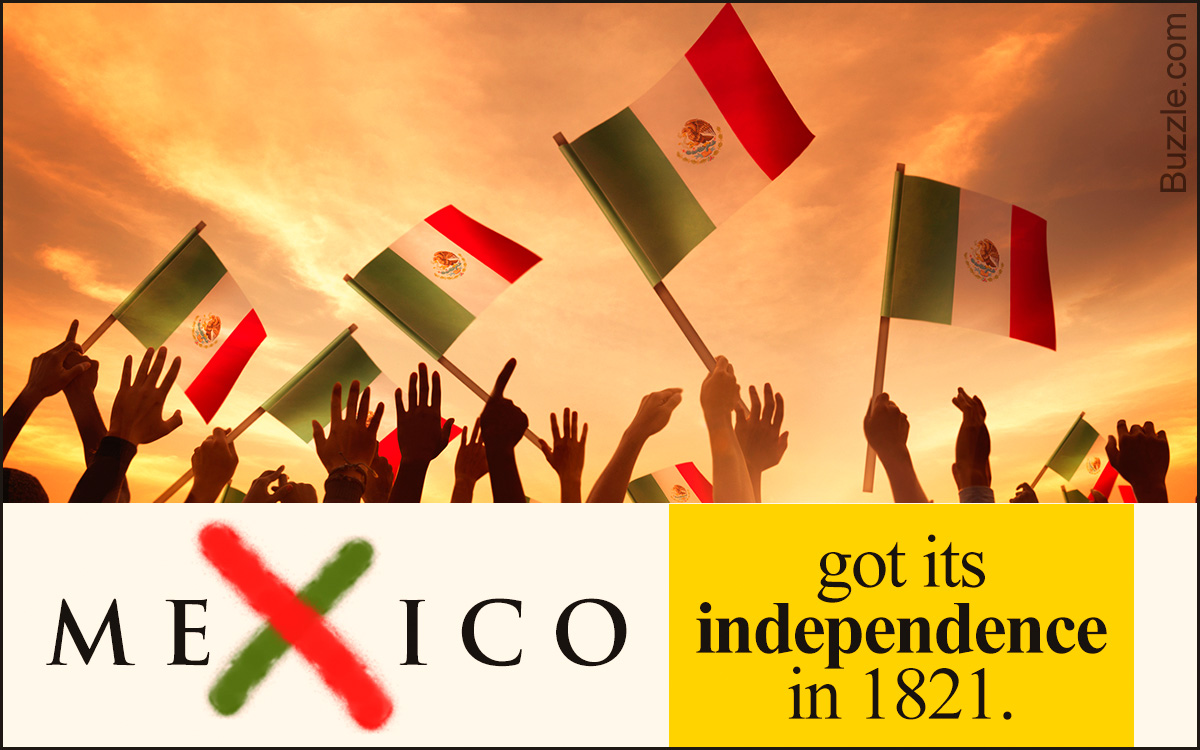 The Mexican Independence War began in the year 1810 and continued till 1821. It was a struggle to achieve freedom from the oppressive rule of the Spanish colonizers by the Mexicans. Here’s more about the war that led to Mexico’s freedom.

Encouraged by the voyages of the famous Christopher Columbus, many European explorers forayed into the ‘New World’, i.e., the Americas. Incidentally, the name ‘America’ comes from the name of another such explorer, Amerigo Vespucci. Hernán Cortés, a Spanish conquistador eliminated the incumbent powers in central America, primary among which were the Aztecs, and established Spanish rule in 1521. The political and social structure established by the Spanish Viceroy was one that heavily favored the Spanish population. Spanish-born peninsulares and American-born Spaniards, criollos held the higher positions, and the mestizos, born of mixed parentage, and the indigenous people were given low-level, labor jobs. The social paradigm, always unbalanced with respect to the demographics, was bound to fail at some point. Mexico gained independence from the oppressive Spanish rule in 1821, exactly 3 centuries after the fall of the Aztec empire.

Conspiracy of the Machetes

There had been an attempt, 11 years before the start of the actual war of independence, to eradicate the Spanish from Mexico. A poor criollo worker Pedro de la Portilla and his friends and relatives had planned to free convicts from jails and, with their help, ransack the Viceregal offices, capturing important officials and Spanish funds. However, a cousin of Portilla, not coming to terms with the explosive plan, ratted on the company to the authorities and all of them were arrested. Some died in prison, but Portilla survived to see an independent Mexico. This failed attempt, called the conspiracy of the machetes was the first spark of Mexico’s independence.

Political upheavals in Spain – Napoleon had installed his brother Joseph on the throne of Spain, usurping the traditional Spanish Monarch Ferdinand VII – resulted in an unstable Mexico, divided between loyalties towards the Viceroy and Ferdinand VII. The peninsulares succeeded in banishing the existing Viceroy to Spain and installing a retired Spanish general, Pedro Garibay, on the post. The uncertain government, combined with the heavy taxes levied upon the people of Mexico, resulted in nationwide unrest and, ultimately, the war of Independence. The war was brought about by Miguel Hidalgo y Costilla, a Roman Catholic priest, on 16 September 1810. In a speech, now famously known as Grito de Dolores (The Cry of Dolores), he passionately urged the gathered masses to fight for Mexico’s freedom. The army, mostly made up of untrained native Indians, sacked the important mining town of Guanajuato and killed many Spaniards and criollos there. The massacre did not go down well with several of Hidalgo’s colleagues, and Ignacio de Allende, a co-conspirator, left Hidalgo with a part of the army. Despite winning a few skirmishes, neither Hidalgo nor Allende could make a decisive move against the Spanish. Both were captured – separately – and executed. Their heads were hung in Guanajuato as a warning to the rebels.

The execution of Hidalgo did not deter the Mexicans from fighting for their freedom. The leadership was taken over by Jose Maria Morelos, another Roman Catholic priest. Under his leadership, the rebels captured the cities of Oaxaca and Acapulco. It was Morelos who declared the official document of independence, which emphasized on equal rights to the native-born Mexicans. He was captured and suffered the same fate as that of Hidalgo and Allende on December 22, 1815. Morelos is one of the revolutionary rebel leaders considered to be the national hero of Mexico.

The efforts of Hidalgo and Morelos were carried forward by Vicente Guerrero and Guadalupe Victoria. These revolutionary guerrillas fought from Oaxaca and Puebla, respectively. In the year 1820, the Viceroy of New Spain, Juan Ruiz de Apodaca, ordered Agustin de Iturbide, a conservationist Creole, to defeat these revolutionaries and put an end to the Mexican freedom struggle.

The Plan of Iguala

At the same time, the monarch of Spain, King Ferdinand VII, was forced to sign a liberal Spanish constitution with republic values and practices. Iturbide felt that it might affect the status of the Creoles in Mexico and also realized that if Mexico achieved freedom from Spain, the Creoles might get a chance to rule the country. This made him join forces with the revolutionaries and he came up with the ‘Plan of Iguala’, also known as the ‘Plan of the Three Guarantees’.

The Plan of Iguala was based on three main principles that would lay the foundation of independent Mexico. The plan read that Mexico would get its freedom from Spain; Roman Catholicism would be its official religion; and the peninsulares and the criollos in Mexico would gain equal status. In reality, Iturbide only intended to shift the seat of power from Spain into Mexico. His intention was to have the now-weakened Ferdinand VII come to Mexico. However, the unknowing masses, having been promised independence, largely favored the plan.

The Viceroy, knowing that a rebel victory was inevitable, resigned from his post. The Treaty of Cordoba was signed between Iturbide and the representatives of the Spanish Empire, declaring Spain as an independent monarchy to be ruled by a European king or a local criollo.

However, Mexican freedom benefited only the elite classes, i.e., the Spanish born in Mexico. When Ferdinand VII or any other monarch refused to take up the rule of Mexico, Iturbide crowned himself as the Emperor of Mexico. Nevertheless, his rule was short-lived. He was dethroned a year later and the rule was taken over by the Congress, headed by the triumvirate of Guadalupe Victoria, Nicolas Bravo and Pedro Celestino Negrete.

Mexico celebrates its Independence day on September 16, the day when Hidalgo summoned his followers to join him in the freedom fight. This day is celebrated with great pomp and delight in every town of Mexico. The celebrations start on September 15, when a member of the government announces the grito or ‘cry of independence’ as announced by Hidalgo. The Independence Day celebration is a way for people to remember and honor the heroes of the war who fought for the freedom of their future generations.