The tactics and strategies of the Roman army helped them fend more than half of the world, and thus they came to be known as one of the best armies, which remains unchanged even today. The following Historyplex article sheds light on their war strategies in detail. 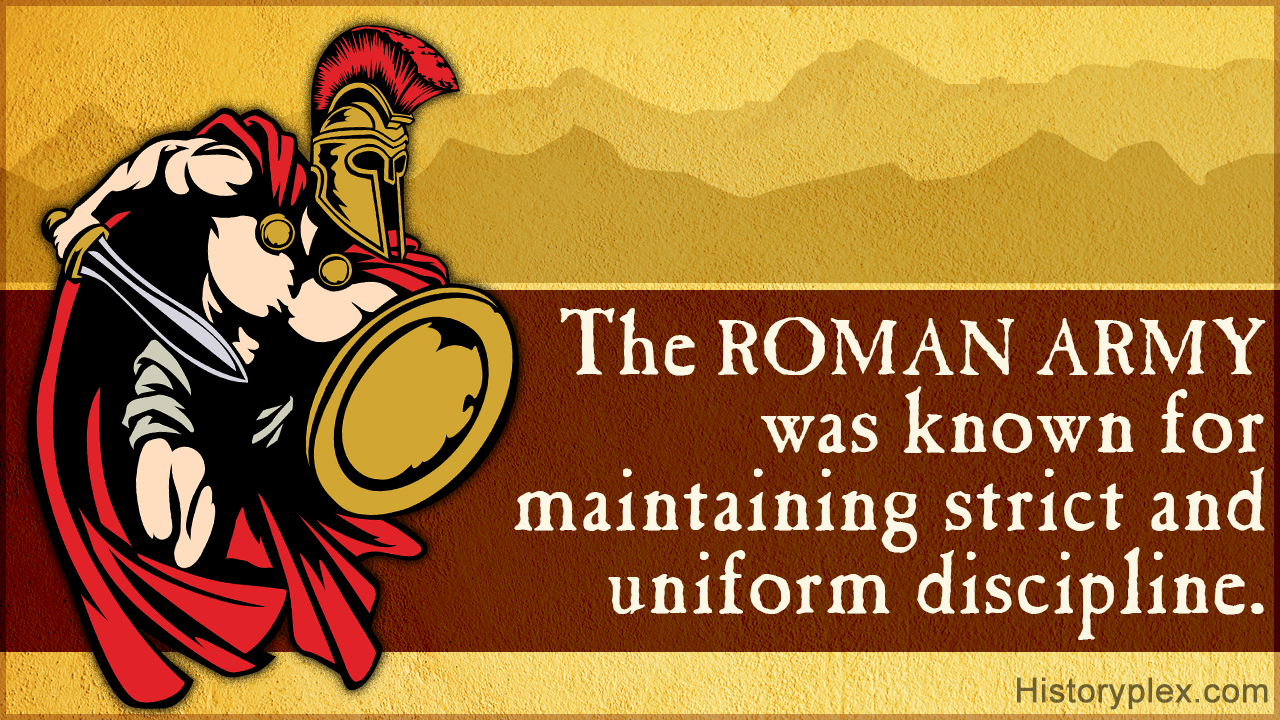 The tactics and strategies of the Roman army helped them fend more than half of the world, and thus they came to be known as one of the best armies, which remains unchanged even today. The following Historyplex article sheds light on their war strategies in detail.

Over one quarter of the world’s population lived and died under the rule of the Roman empire.

The Roman empire, at the peak of its power, stretched from England in the north to Egypt in the south. It also brought the present Middle East under its rule. It was known as the empire without boundaries, and was one of the largest empires ever.

A crucial reason for such a large empire was the army that the Romans maintained. Throughout its history, politics was played dirty in Rome, and many a time, Rome made a transition from a republic to an empire and back to a republic again. Regardless of who controlled the empire, the army remained a constant in all external affairs. The army was revered almost sacred and was respected by the commoners and the elite alike.

The reasons why the army was particularly effective in bringing foreign lands under the Roman yoke are elucidated below:

Strict and uniform discipline was maintained in the army. New recruits went through rigorous training and lessons in discipline. There were strict punishments for any wrongdoings with respect to order in the army.

A lot of money and effort was spent in command and control of the troops. Replacement of exiting troops and recruitment were also given special attention. Efficient leaders proven in battle were chosen to command men. These leaders were war heroes, and hence, they won their troop’s respect by example, not just by title.

The Roman army learned constantly. They borrowed tactics from better armies and implemented them, thus, making their own army much more efficient. Also, Roman engineering was second to none in the whole of Europe. Armors, siege weapons, blades, and even the way the wooden shaft of a pilum would break during thrusts and on contact were efficiently researched and designed.

These reasons were important in keeping the army as an efficient killing force. However in addition to policies, efficient tactics were also employed by able generals. The tactics are given as follows.
Back to Top

The basic infantry formation of the Roman army

This formation was the primary formation of the Roman infantry.

The first line: The first line comprised the hastati, or the newest recruits. They were the youngest and the most inexperienced in battle and hence were used in the first line of attack.
The second line: This line held the principes. They were soldiers of sufficient experience and were at the peak of physical health. They would kill anyone who got through the first line.
The third line: This comprised the triarii or the veterans of combat. They were hugely experienced soldiers and hence were kept at the back of the line to motivate those in the front lines. If an attack penetrated the first two lines of infantry, the triarii took to battle to either contain it or make way for an organized retreat.

In this tactic, the infantry lines were thinned to provide an incisive attack into the enemy lines. The stab would usually contain a mixture of hastati and principes with a few triarii at the center to start skirmishing after the enemy lines were breached.

Wider lines allow the troops to outflank the enemy

This formation was popularly used by Hannibal of Carthage to defeat the Romans. Later, the Romans used this tactic in their own army. It was used to counter wider enemy lines and sometimes also to outflank them from either sides.

A counter to the wedge, this formation invited the enemy to attack a seemingly vulnerable center. The vulnerable center was usually backed up by reserve troops, and if the enemy took the bait and tried to penetrate the lines through it, a bottleneck effect would take place and the thin column of enemy troops would be hacked down by all sides.

Troop density is increased in one of the flanks

Creating channels in the infantry lines

Front infantry lines regrouping, and the triarii killing the elephants
Famously used by Scipio Africanus to defeat Hannibal in the battle of Zama, this tactic was a stroke of genius military strategy. Hannibal often employed heavily armored elephants in his tactics. These elephants would wreak havoc on the enemy lines, breaking formations and sending the soldiers running for their lives. After gaps in the infantry lines were made, Hannibal’s job was very easy. To counter this strategy, Scipio made multiple channels in his lines so that these elephants could move into these lanes and to the back of the lines, where skirmishers would take care of the elephants. This tactic is very risky though, as it had to be perfectly executed as it leaves the rear line of triarii exposed to an attack because of the channels created.
Back to Top

The shields are for defense and pilums for repulsion

As the name suggests, this formation was employed to counter attacks from the enemy cavalry. The infantry would form a tight square with shields at the boundary, protecting the soldiers within this boundary. Pilums were stuck out in between the shields to thrust at the incoming horses.

A tight cubic cocoon to protect the troops from projectiles

Also known as the tortoise formation, it is still the most famous formation known about the Roman army. Here, the front row of soldiers would hold their shields in front of them to protect soldiers from projectiles. The back rows of the soldiers would hold their shields above their heads. This protected the soldiers from overhead projectiles. This led to a tight formation, which was virtually impenetrable. However, due to this formation, it hampered troop mobility and flexibility.