Operation Barbarossa was the code name for the ground offensive launched by Nazi Germany against Soviet Union during World War II. This Historyplex article provides a summary of the events which were not only pivotal to the outcome of the war, but also to the way the world would shape after the war. 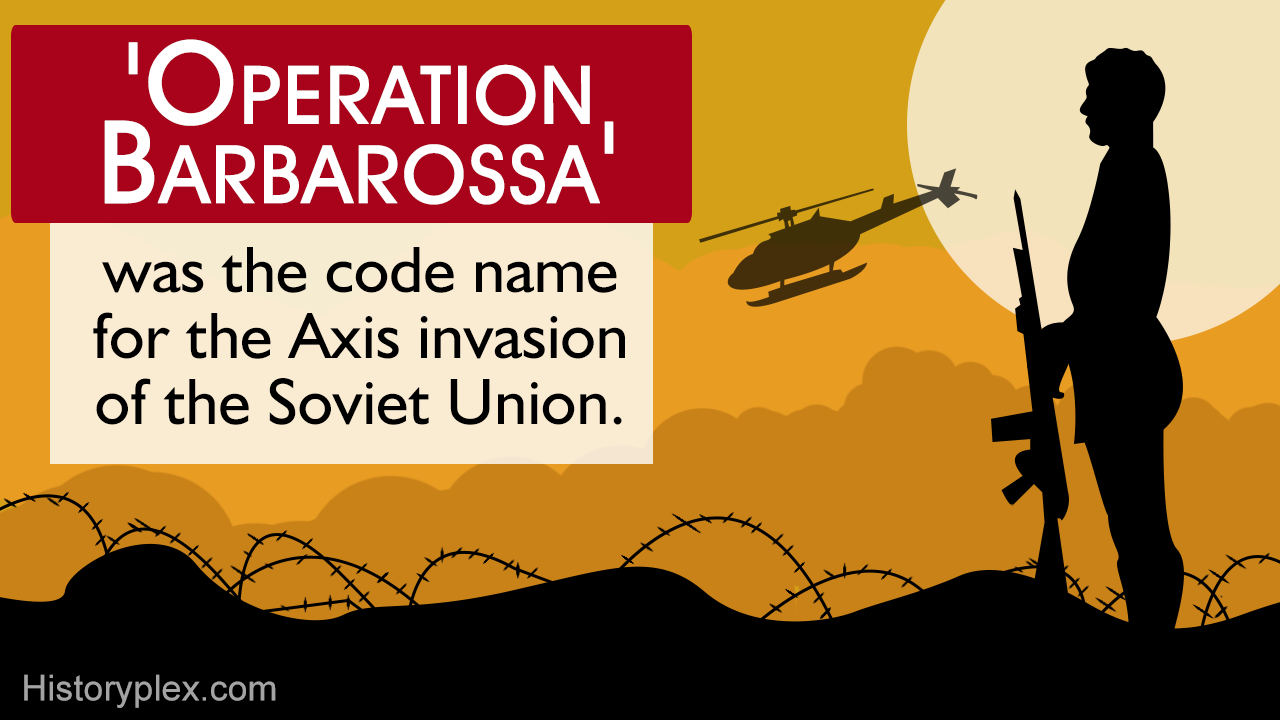 Operation Barbarossa was the code name for the ground offensive launched by Nazi Germany against Soviet Union during World War II. This Historyplex article provides a summary of the events which were not only pivotal to the outcome of the war, but also to the way the world would shape after the war.

“We have only to kick in the front door and the whole rotten Russian edifice will come tumbling down.”
― Adolf Hitler

The annexation of Poland and the retreat of Britain, although temporarily, had given Germany a sense of triumph. With the might of the Wehrmacht and the Luftwaffe on his side, Adolf Hitler issued Directive 21, which commanded his forces to attack and capture of Russia. In spite of the humiliation Germany had faced in World War I, Germany had signed the Molotov-Ribbentrop Pact, a non-aggression pact which guaranteed Russia a decisive share of the territories of Latvia, Lithuania, and Poland, if Germany was successful.

True to their word, Germany shared parts of Lithuania and Ukraine as part of their pact and enjoyed a healthy economic trade of raw materials, like wheat and oil, as war supply materials. But both sides knew the treaty was a farce which wouldn’t last long, and were building up arms to that effect. Before we get to the summary of Operation Barbarossa and its significance in World War II, let us take a closer look at the background and motive of launching this offensive.

Hitler was aware that in order to fulfill his dream of conquering Europe, he would need an unhindered supply of fuel and other resources, which included food stocks and labor. To that effect, he had an eye on the oil fields in the Caucasus. Germany started sending out tank divisions and positioning them around Russia in the guise of a drilling exercise against the British. The Russians themselves believed that Germany would conquer the West before turning their eyes to the East. Another major motive for Hitler to invade Soviet Union, was his Nazi ideology that the Soviets as Slavs were a substandard race ruled by Jewish Bolshevik masters, as outlined in his biography Mein Kampf. Another reason that justified the actions of the Germans was that Joseph Stalin had wiped out all the generals who had fought in World War I and advocated communism. A few of the other probable causes were:

Operation Barbarossa was initially set to launch on May 15, 1941, and called Operation Fritz. But the Führer renamed it Barbarossa after the 12 century Roman emperor Fredrick Barbarossa who sought to establish German rule over Europe. It was officially launched on June 21, 1941.

Germans had begun amassing troops near the Soviet border under the guise of a drilling exercise.

Hitler had accumulated 3.2 million German and 500,000 Axis soldiers and conducted aerial surveillance of the surrounding areas.

Initially, the Nazis tried to deceive the Soviets by intentionally leaking plans to target Britain under dubious code names such as Operation Harpune and Haifisch.

Hitler agreed on a three-pronged attack on the Soviets. It divided its army into 3 sections, with Army Group North capturing Leningrad, Army Group Center to advance through Smolensk and occupy Moscow, and Army Group South to take over Kiev and the main target, the oil fields of Caucasus.

Germany decided to bring rear support in the form of Einsatzgruppen and Waffen-SS units.

In spite of the prejudice Nazi Germany held against the Soviets, they were by no means stupid and were continuously building tanks and aircraft to that effect, expecting the Germans to attack.

Although the Red Army had huge numbers, it had officers lacking in experience due to Joseph Stalin executing most of the generals who fought in World War I, and the remaining deported to Siberia.

Most of the Soviet forces were in peacetime mode, and the aviation units were parked closely instead of being in closed quarters or airplane sheds.

The Soviets decided not to commit the same mistake as the French with the linear defense tactic. They instead grouped the infantry divisions into large formations, with 29 Mechanized Corps consisting of 1031 tanks each. 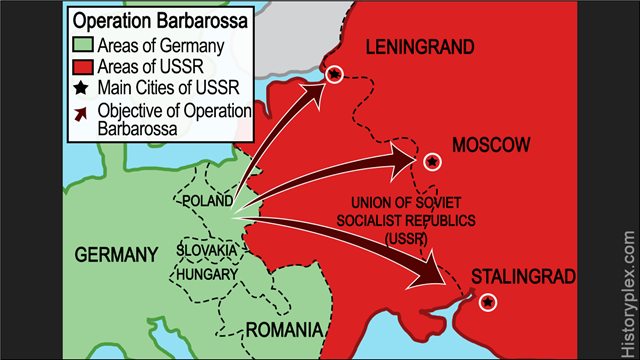 Germany deployed its blitzkrieg attack by bombing Russian planes that were sitting ducks on the border in Soviet-occupied Poland.

On June 22, the town of Molotov was under heavy attack from German units. Russian propaganda started with slogans of the Great Patriotic War to protect itself from the Germany invasion, and the citizens were called to arms.

By July 1, Germany had already captured the cities of Riga, Dvinsk, Minsk, and Lvov.

Army Group North crossed the Neman and Daugava rivers to enter Raseiniai, where they encountered 300 tanks of the Soviet Mechanized Corps. Meanwhile, the Panzer groups had crossed into Daugavpils.

Hitler ordered the Panzer group in Army Group North to hold their position until they were joined by the infantry division.

The mission of Army Group Center was to occupy Minsk, a major railway junction and the only escape route for the Soviet forces in case of an emergency.

On July 3, Army Group Center had succeeded in destroying the 3rd, 4th, and 10th Army division at Minsk.

On July 6, the Soviets attacked the Panzer division of Army Group Center with 700 tanks. But the Red Army was quickly defeated with counterattacks from the Luftwaffe.

On July 26, the 2nd and 3rd Panzer division were finally able to close the gap and occupy Smolensk, capturing 300,000 Red Army soldiers.

After Minsk, Army Group Center encountered five divisions (16th, 19th, 20th, 21st, and 22nd), out of which three of them were defeated at Smolensk.

Hitler decided to change the strategy and inflict economic damage to the Soviet Union by capturing the industrial city of Kharkov, the Donets basin and the Caucasus oil fields as well as the city of Leningrad.

Kiev was captured on September 16, and Germans had claimed to capture over 600,000 Soviet soldiers. But actual losses were 452,720 men.

On October 2, Operation Typhoon commenced with the German army breaking through the cities of Oryol, Bryansk, and Vyazma. At this point, the Red Army only had 90,000 tanks and 150,000 men to defend Moscow.

As winter set in, the temperature started falling rapidly, and the German tanks couldn’t mobilize due to being stuck in the mud. On October 31, Germany ordered the halt of Operation Typhoon to reorganize its troops.

The Red Army may have lost the battle in the initial phases but gathered wind and managed to collect 1.25 million men to defend against the German Army in Moscow.

On December 2, 1941, the German Army were 5 miles away from the Kremlin but were pushed back by the onslaught of Soviet forces.

The main reason for Germany’s defeat was the underestimation of its enemies. The way the Soviets altered their strategy at the last minute surprised even the Führer. The Russian winter, or Father Winter, had played an important part and provided the Soviets with an undue advantage as Germans couldn’t battle severe temperatures of -40ºF. In a desperate attempt, the Germans launched Operation Winter Storm to rescue the Germans surrounded by the Russians, but to no avail. Operation Saturn andOperation Uranus had cost the Germans dearly, and the Germany Sixth Army had surrendered. The war had cost Russia 110,000 civilian deaths and an additional 500,000 were buried in mass graves.

The greed of German’s military leader to capture the Caucasus had evidently led to its defeat. The Axis and its allies suffered 850,000 casualties in total; 400,000 Germans, 200,000 Romanians, 130,000 Italians, and 120,000 Hungarians. The defeat of Nazi Germany became a turning point in World War II, which led to its imminent defeat.