An Introduction to the Common Types of Medieval Catapults

The catapult is a device that works on the principle of accumulated tension and can be used to project an object to long distances. In this article, we shall learn about the different types of catapults, including the ones used in the Medieval times.

Home / Uncategorized / An Introduction to the Common Types of Medieval Catapults 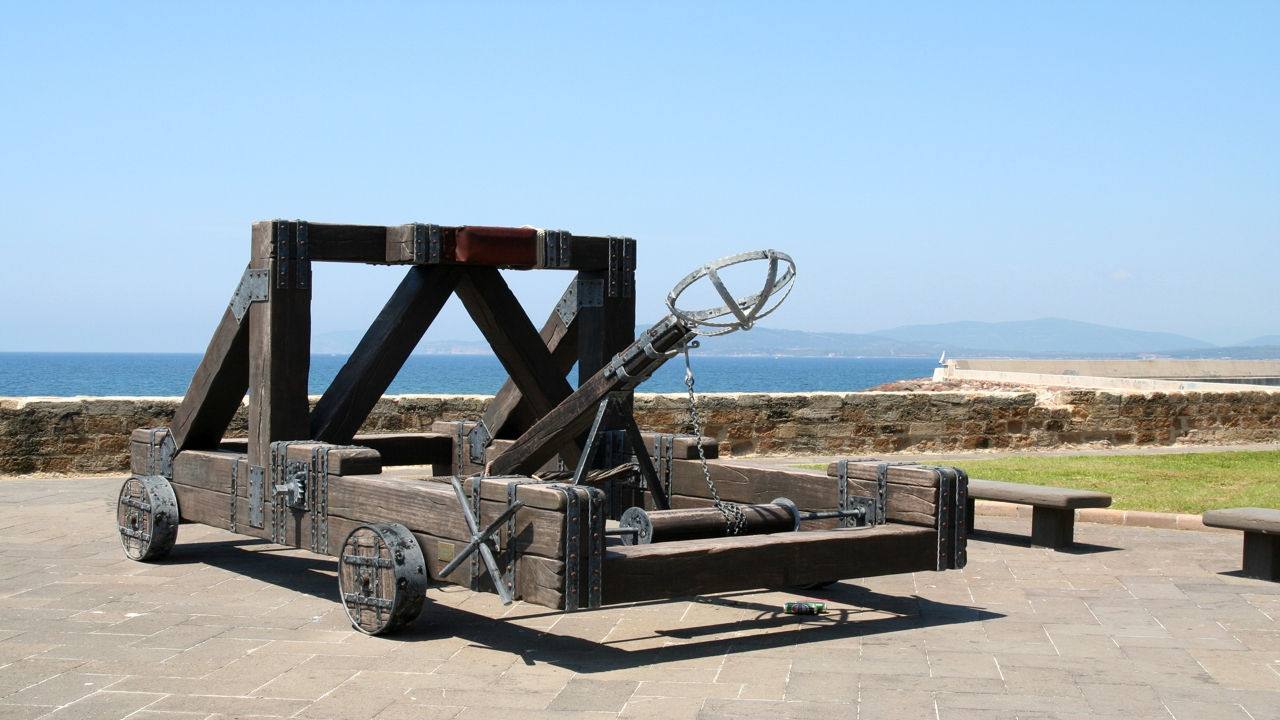 The catapult is a device that works on the principle of accumulated tension and can be used to project an object to long distances. In this article, we shall learn about the different types of catapults, including the ones used in the Medieval times.

When we think of catapults, what we conceive is a toy kids play with. However, if you have watched movies depicting the Middle Ages, say Gladiator, Troy or Lord of the Rings – Return of the King, then you probably know how different types of catapults were used as weapons of destruction. These massive weapons of the Medieval times were known to have the power to bring down castles and forts. They were used to hurl a host of objects to agonize the enemy, and had been instrumental in the conquest of many cities. These Medieval ‘monsters’ were really huge and it was scary to see them in action. What’s more, most of them weren’t even portable! They were constructed on site before a battle began and were mostly built from wood.

Medieval catapults varied widely in shape, size and design, although the purpose of use was almost the same. Be it the massive trebuchet or the mangonel, they were all feared for their ability to cause widespread devastation. Here we shall learn about the different kinds of catapults used during the Middle Ages.

If we look at the history of catapults, we find that the trebuchet is the oldest among the siege weapons and also the most powerful and effective. Believed to have been invented in the Middle East or China, it came to be a part of warfare in Europe during the Medieval times and was known in England as ‘ingenium’. The French took a special liking to the trebuchet and it remained a part of their military equipment for years. Historians believe that the trebuchet continued to be used by the Europeans even after gunpowder was invented. 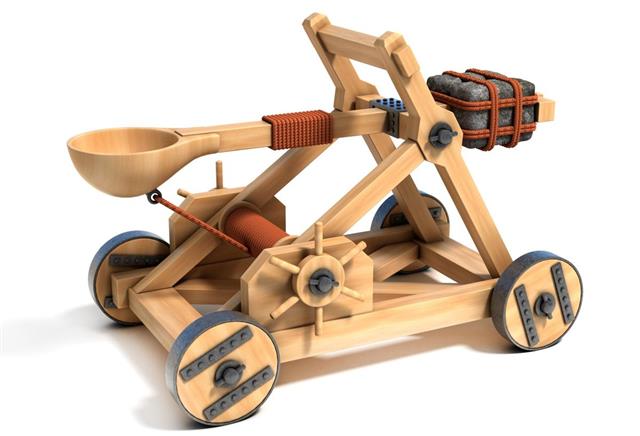 The trebuchet is different from the other types of catapults for the fact that while in most catapults, the force required for throwing the object is generated by the tension in the rope or string, a trebuchet uses a counterweight of large mass that is instrumental in projecting the object tied to the opposite end.

Many believe that the basic design of the trebuchet was conceived from the shadoof, an ancient device used to draw water from streams. A shadoof is a simple device that consists of a long pole that is balanced at the center, similar to the modern see-saw that you find in playgrounds. On one end of the pole, a heavy weight such as a stone was tied, while a bucket was tied to the other end with a long rope. The rope was pulled downwards till the bucket was filled with water, following which the rope was released. As the end of the pole tied to the heavy stone went down, the bucket of water was pulled up.

The trebuchets were used to throw a range of objects, from stones, poles, metal weapons and fireballs to even animal and human corpses, across the walls of castles. The trebuchets in use during the Medieval times varied in size, range of throw and accuracy. A single trebuchet could be used to hurl thousands of stones per day. There used to be two types of trebuchets, one had people powering them and were known as Traction trebuchets and the other type used stones as counterweight and were known as Counterpoise trebuchets. 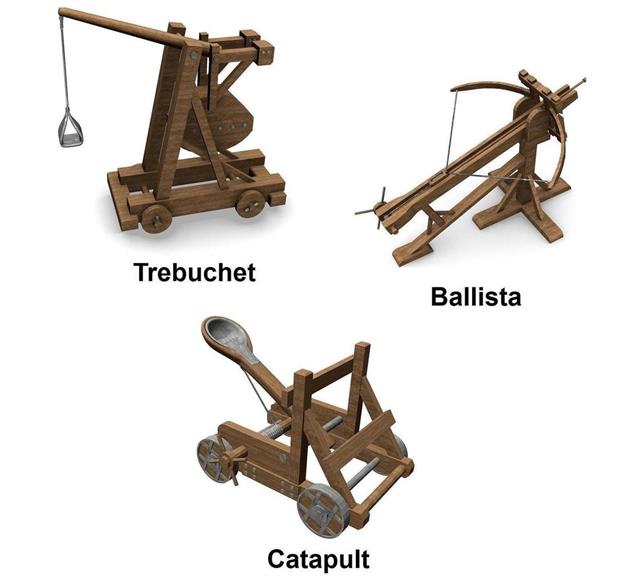 The ballista was invented by the Greeks in the 8th century B.C. and was similar to the modern crossbow in appearance. The second oldest siege weapon in history, the name is derived from the Greek word ballista which means ‘to throw’. It was used to fire arrows and other sharp objects and was also called the dart-throwing machine. It was immobile and had to be constructed at the site of warfare.

The ballista works on the principle of the catapult, where the tension of a twisted rope is used to throw huge stones at high speeds along a flat trajectory. It is said that one of the major reasons the Romans were so successful in building up such a huge empire is that they used the ballista to destroy walls of forts and enemy cities, in seconds. It was one of the most accurate siege instruments of the Medieval Era. However, its major drawback was its short range.

The ballista was modified to form the Springald, a weapon that worked on the same principle as a ballista. The only difference was that the springald had a vertical springboard fixed at its lower end, and was meant for use in compact spaces.

The credit for inventing the mangonel goes to the Romans who designed the weapon in around 400 B.C. They wanted something that could cause similar destruction as the Greek ballista, and yet, was smaller and mobile. The word Mangonel is derived from the Greek word manganon which means ‘an engine of war’. Initially, it had a sling on which the projectile was placed but later on, the sling was replaced by a wooden arm.

Among the three types of catapults, the range of the mangonel is the longest, and an object shot using it can reach up to a distance of around 1300 feet! Even though it is larger in size than the Ballista, it is small when compared to the huge trebuchet and has wheels attached to its base. Now, if you are wondering where on the mangonel does one place the object to be thrown, then let us tell you that it was kept on the hollow bowl that was carved on the arm-like projection.

Mangonels differ from the ballistas because unlike the ballistas, the path of the object projected by these machines is an arc. It was the third deadliest siege weapon of the Medieval Era, and was also sometimes called the Onager. However, the onager is a much smaller siege weapon that was designed on the same lines as the mangonel. If you have a look at the images above, you’ll see that the onager (the image on the right) was nothing but a much simplified version.

In spite of the fact that the catapult has ceased to be the powerful weapon of destruction in warfare that it once was, you can find them being used even today, albeit for different purposes. Massive catapults are used for launching aircraft from sea carriers. A significant use of these machines during the modern era was during World War I, when they were used to shoot grenades into enemy territories. Another use of modern catapults is for clay-shooting, a sport for hunting pigeons.