Understanding the Importance of Barrel Vaults in Architecture

A barrel vault is a type of vault with its semicylindrical arched surface elongated to form a barrel- or tunnel-shaped structure. This Historyplex post gives information about the tunnel vault's history, construction, roof, and ceiling designs, concluding with its advantages and disadvantages.

Home / Uncategorized / Understanding the Importance of Barrel Vaults in Architecture 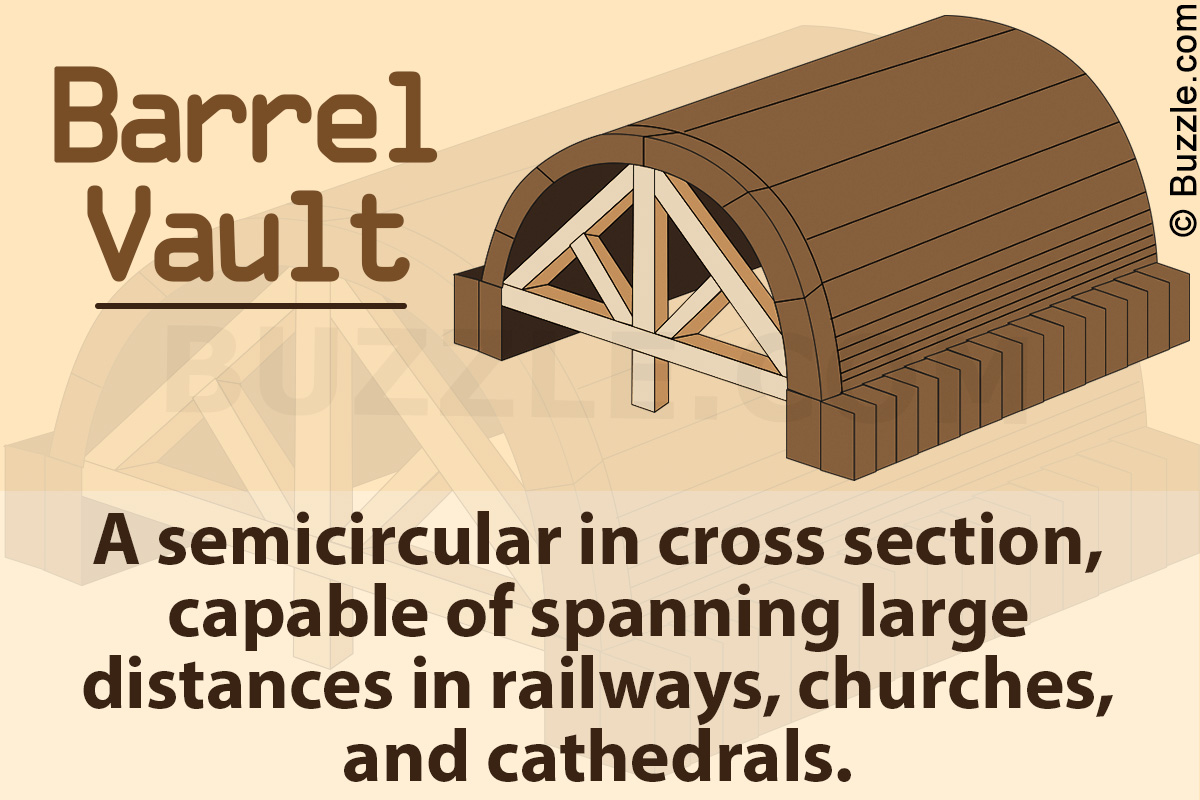 A barrel vault is a type of vault with its semicylindrical arched surface elongated to form a barrel- or tunnel-shaped structure. This Historyplex post gives information about the tunnel vault’s history, construction, roof, and ceiling designs, concluding with its advantages and disadvantages.

A benchmark test of a structural engineering computer model is the analysis of the barrel vault. Structural engineers are asked to give this test due to the involvement of inextensional bending states of stress and its complex membrane.

What comes to your mind when you hear “barrel vault”? It may sound like some giant structure that holds money in a bank, but that’s not the case. Barrel vaults have been constituting an inherent part of ancient architecture, and are still seen in several churches and cathedrals, but they are not meant for any crucial purpose other than adding aesthetic appeal to a room or an area. Yes, they were created to span the distance, like the ones at railways. But with changing times and trends, their use is restricted only to the enhancement part.

What is a Barrel Vault?

♦ The simplest form of vault which is generally semicircular in cross section is a barrel vault. It is also called a tunnel vault and wagon vault because of its resemblance with a barrel or tunnel that has been cut into half lengthwise. Typically, it is formed with a constant radius at the length greater than 24 inches. But, all barrel-vaulted ceilings are not the same. You can select the style that best goes with your application, whether it’s soft, half circle, or elliptical, depending on the severity of the curve you need, to get the desired effect.

♦ When the arches of many vaults are aligned side by side, then with regard to technique, a barrel fault is what is formed. Let us know more about it.

♦ In the beginning, barrel vault construction wasn’t very popular. However, such a construction became a necessity when timber and wood were not sufficient to construct the roofs of buildings.

♦ Barrel vaults have been made use of in Roman architecture and have been there since the times of ancient Egyptians. These designs were seen in Northern Europe, Turkey, and Morocco. In medieval Europe, these vaults were used in the construction of tower houses and castles.

♦ There were also instances in earlier times, when these vaults were used as a part of underground structures like sewers. Some examples where barrel vaults have been used include Sumerian ziggurat at Nippur in Babylonia, the church of Cluny Abbey, and several buildings of the great Late Egyptian mortuary palace-temple of Ramesseum. The popular “Cloisters” at New York City also come under the instances of barrel vaults.

♦ The wooden roofs used to catch fire due to the wood-fire relationship, destructing the complete church structure. This was one of the main reasons barrel vaults were used in a widespread way in early Roman churches.

Today, most of the wagon vaults are built with concrete and impregnating metal frames.

♦ Brick is the primary construction material, without a doubt. But peculiarly terracotta brick is used.

Limestone, too, comes in the most common material list, in the construction of barrel vaults.
♦ Other kinds of stones like granite or schist are also used depending on the local availability.

♦ For the composition of mortars, or for the filling to be done in the openings of the exterior curves of the arch, gypsum and lime, broken brick pieces, and assemblies of clay items, like broken pots and coal debris are used.

Some traditional tools include:

1. Hammers in several shapes, the ones with transverse edges
2. Chisel
3. Trowel

Apart from the above tools, nothing is particular is used in the construction of vaults.

♦ The stone-coated steel tiles are advisable for roofs due to their waterproof and weather-resistant abilities. They are known as “dry under-deck” system.

♦ Conventional cement or terracotta tiles are not waterproof, and thus, need to be maintained and treated from time to time for mold and fungal growth. They depend on a vapor barrier underlay, protecting the roof deck from moisture.

♦ Stone-coated steel roofing tiles will keep their look for years. They give considerably better durability and protection against the natural elements like wind, fire, and hail, with increased energy performance.

♦ Barrel-vaulted ceilings can give a royal impression to any room.

♦ The barrel ceiling is made up of a continuous set of arches that bridge the length greater than 24 inches.

♦ When choosing a barrel ceiling, you can opt for a soft, half-circle, or an elliptical arch, depending on your choice and the style desired in the room.

♦ Nowadays, barrel vault kits are available. These are very easy to install; in fact many do-it-yourself-ers take on the project themselves. All you need to know is how to hold a nail gun and how to use a tape measure. You can buy arched trusses if you want the regal feel.

♦ The issue with barrel vault construction was the pressure that occurred on the lower parts of the vaults. Because of the heavy semicircular arch, an outward force is created in the lower sections, which leads to the breakdown of the vault. Therefore, additional strength is provided to the walls in the form of side anchors.

♦ Making parallel vaults that would share the stress, thus nullifying the outward stress generated, is another solution to this problem. But even to execute this, the outermost walls needed to be extremely strong.

♦ They also tried making thicker walls for absorbing the load. However, this method flopped too, as the length of vaults increased.

♦ Eventually, a new type of vault was created, intersecting two barrel vaults at right angles, thus, negating the generation of the lateral stress. This type of vault is popularly known as groin vault.

♦ The flexibility in barrel construction is the main advantage of this vault ceiling, over other types of decorative ceilings.

♦ It gives the room extra height, for you can easily frame it beneath existing joints and trusses, and it can easily pop up into the garret.

♦ As discussed earlier, generation of pressure on the lower parts of the vaults is the biggest con.

♦ Even the most minute size of holes for decoration, or in windows, can’t be made out in barrel vaults, since their walls are structurally weak.

♦ A set of continuous arches are formed in tunnel vaults, which are mostly so deep that they cover a three-dimensional space. This results in the dark interior, providing very little intrusion for light. Groin vaults came into picture for reasons like these―like wherever light was needed into the building.

♦ Barrel vaults are used as a major structural roofing element in macro-architectural design. It finds applications in the fields of skylight design, and in the designs of bus shelters, skyscrapers, and children’s toys.

♦ The concept of barrel vault was used incredibly in the field of bone surgery. This technique of an incision (“barrel-vault” shaped) is a well-defined state-of-the-art surgical procedure, and therefore, it was named as “barrel vault” by the orthopedic surgeons.

Thus, barrel vaults introduced the usage of vaults in building structures, but they also have their set of drawbacks. However, they have great aesthetic appeal, and are still used today in buildings worldwide. You’ll see them in hallways, media rooms, dining rooms, entryways, and more.