Do You Know What ‘No Taxation Without Representation’ Means?

One of the most igniting factors that gave birth to the American revolution is the 'No Taxation Without Representation'. It was a slogan used by the colonists to protest against the unfair tax levy made by the British Parliament, without their consent. Read this post for more information.

Home / Uncategorized / Do You Know What ‘No Taxation Without Representation’ Means? 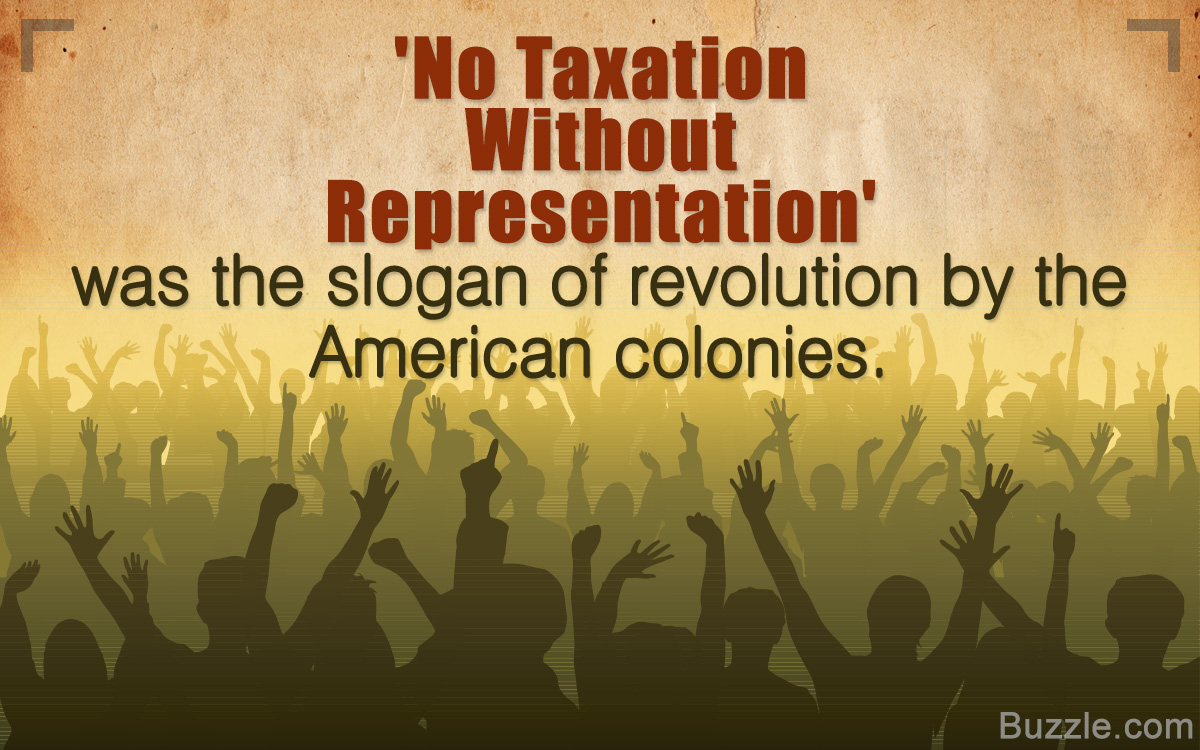 One of the most igniting factors that gave birth to the American revolution is the ‘No Taxation Without Representation’. It was a slogan used by the colonists to protest against the unfair tax levy made by the British Parliament, without their consent. Read this post for more information.

‘No Taxation Without Representation’ was the slogan of a revolution by the American colonies which protested that they should not be taxed until and unless there was someone to represent their community while making the taxation laws. This was the slogan used to protest against the British Parliament that levied taxes on the American colonies, without their consent or approval, or any say in this matter. This, however, formed the background for the American Revolution, and was one of the primary reasons for the havoc of the Boston Tea Party. The Sugar Act, Stamp Act, the Tea Act, and other laws that were passed by the British Parliament, sitting miles away from the American colonies, mostly invited the wrath of the colonists.

Here is a brief account of an important chapter in the history of America, that eventually united the colonists to fight for freedom.

History of ‘No Taxation Without Representation’

It started around 1750s or 1760s, and continued further to give rise to the American Revolution.

Moreover, the anger in the minds of the colonists provided an impetus for the fight for freedom against the British rule. The British had incurred huge losses at the Indian and French wars, and had to recover the losses. To add to it, there was a growing menace of smuggling of tea to the American colonies. The Parliament came up with an idea that could exploit its colonies, and passed laws that taxed the colonists. This unfair treatment triggered anger in the hearts of the colonists and they decided to rebel.

He was a political activist, law practitioner, and a patriot who was pivotal during the protests against the taxation policies. He had coined the phrase Taxation without representation is tyranny.

From the colony of Virginia, he is said to have been one of the key members to oppose the Stamp Act of 1765. He is famous for the speech Give me liberty, or give me death!.

He was one of the most influential patriots from Boston, a delegate at the first meeting of Congress, and one of the pivotal people involved in the Boston Tea Party.

Impact of ‘No Taxation without Representation’

Realizing this, they decided to pass the tax burden to the American colonies. The Tea Act that was passed in May 1773, again sparked anger in the minds of the American colonies, with many consignees at New York, Philadelphia, and Charleston refusing to accept the tea consignments.

On the night of December 16, 1773, Samuel Adams and a group called ‘Sons of Liberty’, emptied 342 chests of tea in the Boston Harbor. This act went about for around three hours. The British incurred huge losses and in retaliation, they charged huge punitive actions against the American colonists, which sparked the American revolution that started around 1775 in Massachusetts.

With the unjust Stamp Act, there were widespread protests. However, James Otis convinced that a common body representing the different colonies would be needed to address the British Parliament. During October 1765, a meeting of the delegates of the colonies was held in New York. All the colonies except North Carolina, Georgia, New Hampshire, and Virginia attended the meeting. However, New Hampshire admitted its acceptance to the resolutions passed at the Congress meeting.

The main agenda was to discuss the oppressive taxation policies of the British Parliament without having any consultation or suggestion from the colonies. This was the first step towards achieving freedom from the British.

The taxation policies of the British government and the monopoly of the British East India company, were among the primary reasons why the relations between the two sides turned sour. ‘No Taxation without Representation’ was one of the first few steps in the American Revolution. The generations today owe their freedom to all those who took part in the revolution. If not for the heroes who thought about and fought for the freedom of their people, we would have never been able to live a free life.