Have You Thought About Why Kansas Was Called Bleeding Kansas?

Bleeding Kansas was an era in the life of the state of Kansas that was so unpleasant and historically significant that nobody will forget it, probably ever. Read this Historyplex post to know more about why Kansas was called Bleeding Kansas.

Home / Uncategorized / Have You Thought About Why Kansas Was Called Bleeding Kansas? 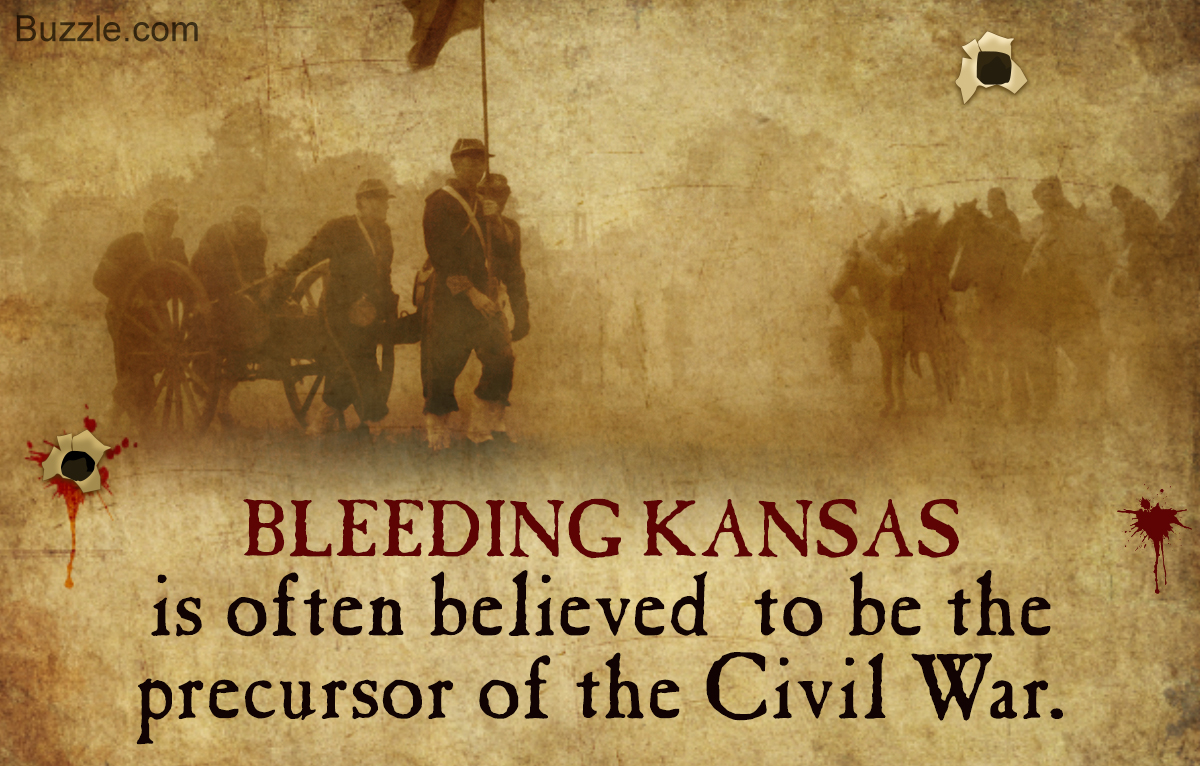 Bleeding Kansas was an era in the life of the state of Kansas that was so unpleasant and historically significant that nobody will forget it, probably ever. Read this Historyplex post to know more about why Kansas was called Bleeding Kansas.

The Bleeding Kansas era (also called the border war) is actually believed to be a precursor to the Civil War. It also resulted in the highest number of casualties during the War in Kansas as compared to any other Union State. Bleeding Kansas had very devastating effects.

Bleeding Kansas was an period in the history of Kansas that saw a lot of bloodshed regarding the issue of slavery. It went on for 6 years, with its timeline ranging from 1856 to 1861, claiming the lives of about 56 people. It all began due to one man’s self-preserved motives of building a railroad to Chicago, which would give him an edge in the elections, and give Chicago an economic lift. This man was Senator Stephen A. Douglas of Illinois. His plan to divert the railroad required all the areas that it passed through to be declared as official states – free or slave. Nebraska and Kansas were not declared yet. Douglas decided to put the decision in the hands of the people, a concept known as popular sovereignty. It helped solve the situation in Nebraska, but Kansas was a different story. The result was a violent and gory bloodshed between two warring factions, resulting in mayhem and loss of life. The following are the contributions to the events of Bleeding Kansas, and its summary.

Stephen Douglas forced the Kansas-Nebraska Act through the Congress in a bid to get the construction of the railroad started. The Act stated that Nebraska and Kansas should define their boundaries and become official states; he left it up to the people to decide whether they wanted a slave state or free state. He did not consider the fact that lending popular sovereignty to the people was violating the Missouri Compromise of 1820, which held that since both the states were located North of the 36° 30′ latitude, they would have to be free states. The situation worked out in Nebraska; but Kansas was another story.

Since Kansas had popular sovereignty, a large number of people flocked there to sway the verdict in their favor. There were two clear factions – anti-slavery and proslavery. The ones who were against it came from the North, and the ones who were for it came from the South, particularly Missouri. These Missourians were also known as the ‘Border Ruffians’. Another faction known as the abolitionists also fought for the anti-slavery side.

Provincial elections held during 1854-55 saw the pro-slavery group win by a very large margin. However, the results were greatly forged, and a lot of coercion and undue influence were used. The Missourians funded for their relatives and friends to enter Kansas to cast votes. Many citizens were threatened to vote for a pro-slavery state. In the ’54 elections, the number of legal residents who voted was just half the total votes; in the re-election of ’55, this number was even lower, way lower.

Kansas was divided into two distinct groups, and the gap between them was widening. As the pros won, they successfully managed to oust the handful of antis that were elected to the Congress. They passed a law stating that anyone who spoke out against proslavery or patronized anti-slavery would be punished, and anyone who assisted these people would face a death penalty. The outraged Northerners termed this law as bogus.

They established the town of Topeka, where free-state law prevailed. Proslavery President Franklin Pierce upheld his side of the law, ignoring Topeka altogether. David Atchison, senator of Missouri, also encouraged people to fight and shed blood if needed, but to drive the abolitionists and free-state advocators out of Kansas.

A majority of the free-state group were actually partaking in a movement known as ‘free soil’. They wanted land for themselves to grow crops, and were worried about the northerners coming there with their slaves, and taking up all the land. It is believed that their real intention was to drive out the slaves, conquer the land, and make Kansas a ‘white state’. They were least bothered about the plight of black people and the inhuman concept of slavery; they were only looking out for their own interests.

The real bloodshed began in May 1856, when a group of ruffians invaded the free-state town of Lawrence, burning the Free State Hotel and two printing presses, and even invading the homes of the citizens. It is believed that there may have been some casualties in this unprecedented attack.

In an act of revenge, abolitionist John Brown and his four sons decided to pay a visit Pottawatomie Creek. They invaded homes of the Ruffians, took a hold of five of them, and hacked them to death. This massacre set off statewide mayhem and destruction, driving people to violence in a state of anger. John Brown participated in many of these fights.

One of the last major outbreaks of violence was the Marais des Cygnes massacre, where five free-staters were killed by Ruffians in May 1858. This was in retaliation to James Montgomery’s act of driving Ruffians out of Linn County. Montgomery was a free-state leader.

The most prominent example of high-ranking people acting like savages was when slavery supporter and Congressman Preston Brooks publicly assaulted free-state senator Charles Sumner, beating him to near-death with his cane. Brooks was the nephew of Andrew Butler, against whom Sumner made a very emphatic speech. He used terminology likening slavery to prostitution, and accusing Butler, among others, of ‘cavorting’ with it. The assault caused him to quit the senate for over 3 years for receiving medical treatment.

John W. Geary was elected as the new provincial governor in 1856, and he tried to restore peace to the region. It worked to some extent, and there was a fragile yet obvious peace, albeit for five months. There were minor eruptions on and off until 1861, when Kansas was finally declared as a free state.

Kansas literally shed blood from 1854 to 1861, aptly giving it the name ‘Bleeding Kansas’. A lot of people lost their lives due to the selfish motives and agendas of a select few. It will be an event that can never be forgotten.