The Basic Difference Between High-context and Low-context Cultures

Every country in the world possesses its own culture. Due to its unique nature, people from different parts of the world may experience cultural differences when communicating with each other. Examination of these differences with reference to indwelling interactions enables us to classify cultures as being high-context and low-context, and the difference between them is explained here. 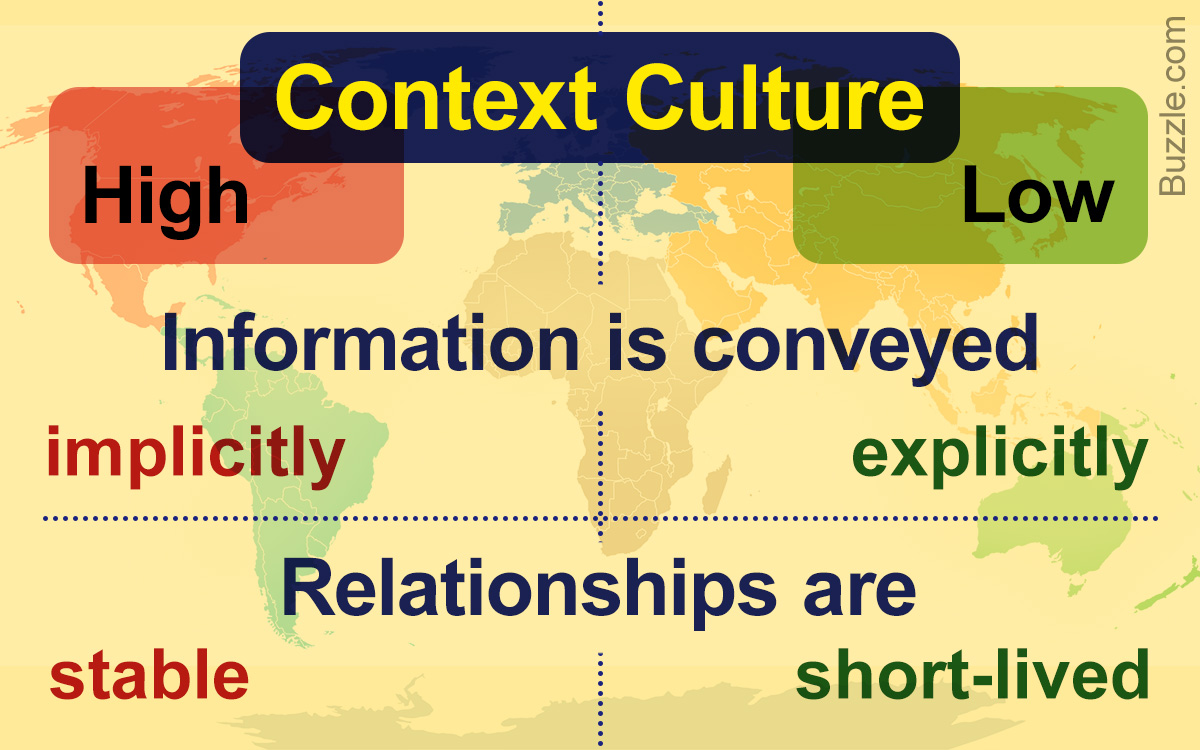 Every country in the world possesses its own culture. Due to its unique nature, people from different parts of the world may experience cultural differences when communicating with each other. Examination of these differences with reference to indwelling interactions enables us to classify cultures as being high-context and low-context, and the difference between them is explained here.

One of the most effective ways to learn about oneself is by taking seriously the cultures of others. It forces you to pay attention to those details of life which differentiate them from you.
― Edward T. Hall, American Anthropologist

Culture encompasses all sets of human activities and behavioral patterns that occur within a given society along with the symbolic structures that lend meaning and importance to these behavioral patterns and activities. It comprises social elements such as customs, laws, dress style, architecture, literature, social standards and morals, religious beliefs, traditions, code of conduct, etc. It influences the way people within a community view the world, experience it, and engage in it. It is a subconscious entity that exerts an invisible force or control over the people belonging to it. Consciousness of this force is achieved when one interacts with people of other cultures, whereas the differences in cultures allows one to appreciate the unique features of each different culture.

Each culture possesses its own set of components that dictate the limits of what is culturally acceptable. These components are involved in the transfer of information among individuals within that culture, and they lend context to the discourse and activities of the community. The context refers to the information, with regards to communication and cultural issues conveyed via action, behavior, or speech. Depending on the amount of information conveyed, cultures are classified as being high-context and low-context. However, this type of segregation is not rigid, but takes the form of a gradient since the contextual base of a culture is not a quantifiable but relative concept. For instance, A, B, C, and D are four distinct cultures, where the contextual level increases from A to D such that A is a low-context culture and D is a high-context culture. Here, one cannot claim B or C as being part of any one type since B is low-context with respect to C, but high-context with respect to A. Similarly, C also cannot be categorized distinctly, thereby showing that the difference between these cultures is relative.

These terms were presented by the American anthropologist, Edward T. Hall, in 1976, in his book titled “Beyond Culture”. He put forth how various cultures function and interact with each other as well as within themselves. He differentiated between them depending on five types of interactions observed in a society.

Time-space compression due to rapid technological advancement has brought people of different cultures together, personally and professionally. Hence, in order to overcome any misunderstanding that may arise due to the cultural differences of different people, the difference between these cultures should be clearly understood so as to ensure a smooth functioning of the global society.