The Great Depression was one of the major economic events in world history. It affected every sphere of life. The outcomes were such that they changed the face of world economy. This article deals in detail with the economic, political, social and cultural effects of this crisis and the process of restoration. 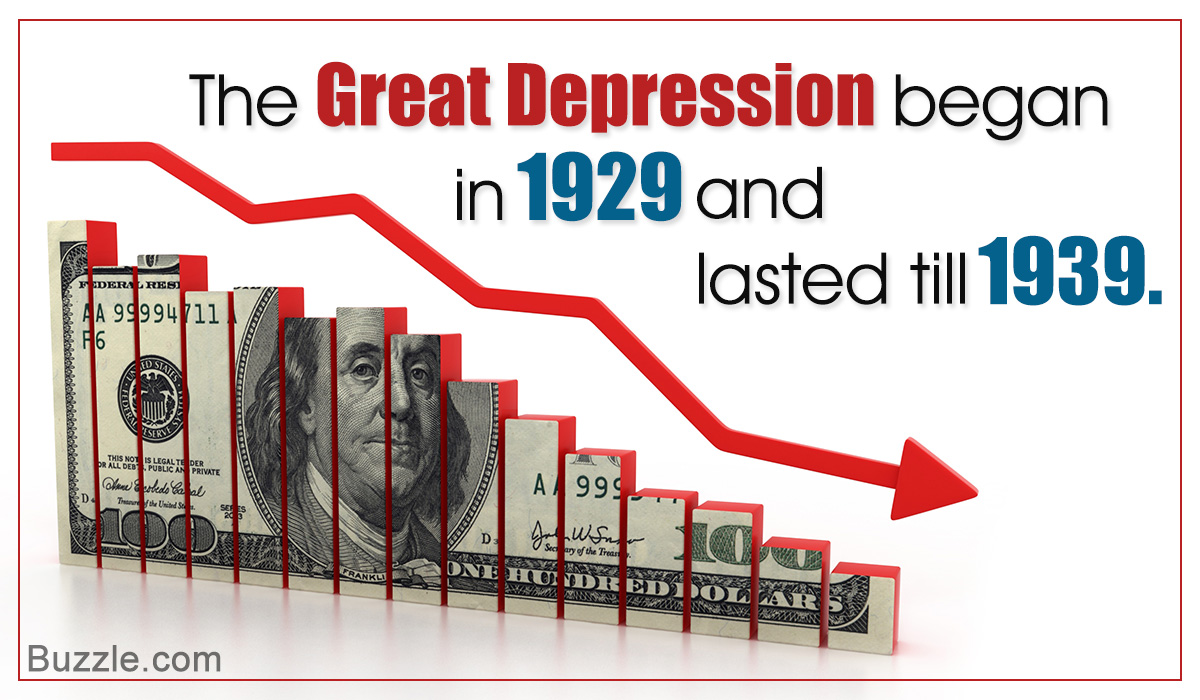 The Great Depression was one of the major economic events in world history. It affected every sphere of life. The outcomes were such that they changed the face of world economy. This article deals in detail with the economic, political, social and cultural effects of this crisis and the process of restoration.

The ‘Great Depression’ was a period in History when business was weak and many people were out of work. The Great Depression began on 29th October 1929, when the stock market in the United States crashed. It quickly turned into a worldwide economic slump owing to the special and close relationships that had been developed between the United States and European economies after World War I. It was the industrialized western world’s longest and most severe depression ever experienced. It ended with the arrival of the War Economy of World War II which began in 1939.

As it was a major economic phenomenon it had serious and widespread economic effects.

The Depression became a worldwide business downturn of the 1930s that affected almost all countries. International commerce declined quickly. There was a sharp reduction in tax revenues, profits and personal incomes. It affected both countries that exported raw materials and the industrialized countries. It led to a sharp decrease in world trade as each country tried to protect their own industries and products by raising tariffs on imports. World Trade collapsed with trade in 1939 still below the 1929 level. It set the wheels rolling towards the end of international gold standards and consequently the emergence of the fixed exchange rate system.

Governments all around the world reduced their spending, which led to decreased consumer demand. Construction came to a standstill in many nations. As a consequence of government actions, the real Gross National Product of nations like United States and Britain fell by 30.5%, wholesale prices fell by 30.8%, and consumer prices fell by 24.4%.

Wages were scaled down to 20 percent, whereas 25 percent of the workforce was left unemployed. This led to decrease in the standard of living pushing the economy further into the depth of the Depression.

Breakdown of the Financial Machinery

Thousands of investors lost large sums of money and several were wiped out, losing everything. Banks, stores, and factories were closed and left millions of people jobless, penniless and homeless. In 1929, 659 public sector banks were shut and by the end of 1931 this number rose to 2294. Many people came to depend on the government or charities to provide them with food.

Due to lack of subsidies and loans, farmers were unable to support mass produce leading to under-capacity output. Textile farming faced the major blow. The period served as a precursor to one of the worst droughts in modern American history that struck the Great Plains in 1934. Although a few segments under agriculture – e.g. cotton – benefited from the crisis, in general the whole agricultural sector experienced a setback.

The Depression had profound political effects. In countries such as Germany and Japan, reaction to the Depression brought about the rise to power of militarist governments who adopted the aggressive foreign policies that led to the Second World War. In Germany, weak economic conditions led to the rise to power of Adolf Hitler. Germany suffered greatly because of the huge debt the country was burdened by following World War I. The Japanese invaded China and developed mines and industries in Manchuria. Japan thought that this economic growth would relieve the Depression.

In countries such as the United States and Britain, the government intervened which ultimately resulted in the creation of welfare systems. Franklin D. Roosevelt became the United States President in 1933. He promised a “New Deal” under which the government would intervene to reduce unemployment by work-creation schemes such as painting of the post offices and street cleaning. Both agriculture and industry were supported by policies to limit output and increase prices.

This economic catastrophe hit the humans in the worst way possible. They were surrounded by miseries from all sides.

The Great Depression ended as nations augmented their production of war materials at the beginning of World War II. This increased production provided jobs and put considerable amounts of money back into circulation. In an attempt to revive the economy, governments all over the world actively participated in the regulation process especially of the financial markets. United States constituted the Social Security Act (1935) as a response to the hardships of 1930s. It included unemployment compensation and old age and survivors’ insurance scheme. With this, several other acts like the Security Exchange Act of 1933, the Glass-Steagall Act, Emergency Relief and Construction Act, etc., were introduced as corrective measures.

In Germany, Hitler developed a massive work-creation scheme that had largely removed unemployment by 1936. Rearmament, paid for by government borrowing, started in a major way. In order to control inflation, consumption was restricted by rationing and trade controls. By 1939 the Germans’ Gross National Product was 51% higher than in 1929 which was mainly due to the manufacture of machinery and armaments.

Comparison with the Late-2000s’ Recession

If we analyze the Great Recession of 2008 and the 1930s’ Depression where the gold showed an acidic rise, it is clear that the gold standard was a completely different problem in comparison to the fiat free-floating US dollar currency of 2008 crisis. The stem of both the crisis was same, but the outcome was different. In 1930s, the collapse set in deflation whereas in 2008 it resulted in the condition of inflation (excess money). Unlike 1930s, the United States economy was caught in a ”liquidity trap” post 2008.

The Great Depression established the inequality standard at an all-time high which was used as a yardstick for many years, but 2007 and 2008 witnessed the world reach a new standard of wealth inequality that challenged that of 1929. In form and consequences, the two crisis were completely different.

Till date, this period is reflected back as ”the roaring twenties”, indicating the severity and the gravity of that time. In a nutshell, the Great Depression was like bittersweet. It naturally had disastrous consequences, but it brought about certain positive changes, too.