Famous Leaders and Pioneers Who are an Inspiration Even Today

The world has witnessed many famous leaders whose contributions have helped in making changes in various fields. Here is brief information and a detailed list of some of the greatest leaders of the world. 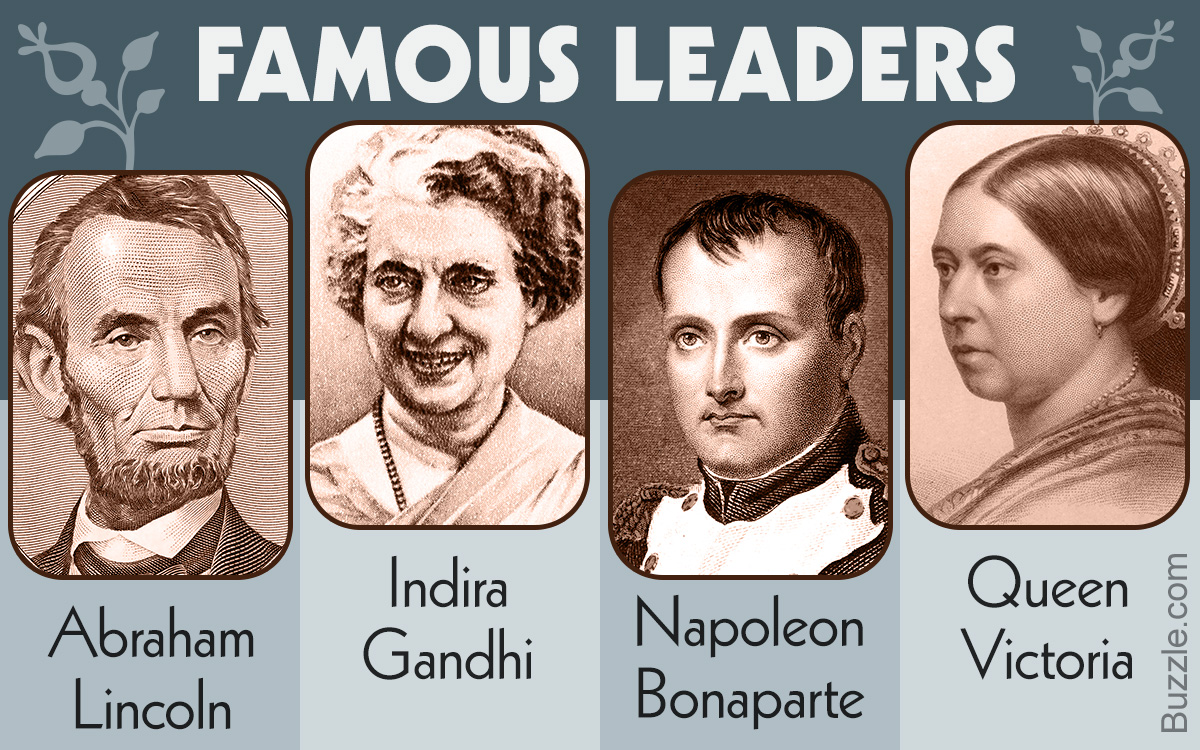 The world has witnessed many famous leaders whose contributions have helped in making changes in various fields. Here is brief information and a detailed list of some of the greatest leaders of the world.

If your actions inspire others to dream more, learn more, do more and become more, you are a leader. ~ John Quincy Adams

They were born in ordinary households, but, were gifted with unique qualities. They had the courage to not to succumb to the present, but to bring about a change for a better future. With their determination, perseverance and intellect, they created history. Here are brief biographies of some of the most famous leaders in history.

Great Leaders of the World

Alexander III of Macedon, commonly known as Alexander, the Great, was one of the greatest rulers and generals in the history of mankind. The empire of Alexander extended from the Mediterranean Sea to the Himalayas. He was a disciple of the Greek philosopher Aristotle. Remaining undefeated, he conquered nearly half the world, and died of fever at the age of 32.

“Always bear in mind that your own resolution to succeed is more important than any other.”

Abraham Lincoln was the 16th President of the United States of America, and also one of the most popular leaders in the world. Lincoln was the pioneer of Emancipation Proclamation that abolished slavery in America. He successfully led the American Civil War. Lincoln was criticized for his policies, and was assassinated while serving his term as the president.

“He who can not support himself, can not take his own decision.”

Gamal Abdel Nasser is one of the greatest and most respected leaders in Egypt as well as the other Arab countries. He led the country to overthrow the monarchy and form a modern government. Specifically, his role in the Suez canal crisis gained him respect from all the others countries of the world.

“You must be the change you wish to see in the world.”

Mohandas Karamchand Gandhi, or Mahatma (meaning great soul), was one of the greatest leaders of India. Mahatma Gandhi played a pivotal role in the Indian struggle for Independence. His policy of Satyagraha, or the non-violence, has been a source of inspiration for several other leaders and revolutionaries in the world.

Martin Luther King was one of the most significant leaders of the African-American Civil Rights Movement. He fought tirelessly for racial equality and gaining voting rights for African Americans. Dr. King carried out his struggle with the help of nonviolent methods. He was awarded the Nobel Peace Prize in 1964 (being the youngest recipient for it). He was assassinated in 1968.

“The people, and the people alone, are the motive force in the making of world history.”

Mao Zedong, or Mao Tse-tung, was a revolutionary, visionary, philosopher and a leader, who contributed in bringing reforms in China. Mao was a communist leader; but, his policies, based on communism-militarism-Marxism led to a new theory known as the Maoism. Mao was the chairman or the chief of the Republic of China for more than 30 years.

“Authority, without any condition and reservation, belongs to the nation.”

Mustafa Kemal, or the Atatürk, was the founder and the first president of Republic of Turkey, or the modern Turkey. He led the nation in the Turkish War of Independence and formed a new form of government. Mustafa Kemal brought great revolutionary changes in Turkey in the fields of education, economy, culture, agriculture, and also made reforms for the liberation of women.

“Take time to deliberate, but when the time for action has arrived, stop thinking and go in.”

Napoleon I of France, or simply Napoleon, needs no introduction. He was one of the greatest military commanders, as well as a great leader and tactician in history. He became the ruler of France after the French revolution. Napoleon was victorious in wars with nearly all the major powers of Europe.

Vladimir Ilyich Lenin, was the founder of the Bolshevik organization, and was also one of the prominent revolutionaries of the Russian revolution. Lenin played an important role in overthrowing the autocratic rule of the Romanov Tsars (or Czars) in Russia. Lenin was the first Head of State of the USSR or the Soviet Union.

“Success is not final, failure is not fatal: it is the courage to continue that counts.”

Sir Winston Churchill was the greatest war-time leaders of the 20th century, having led the United Kingdom during the Second World War. He was the Prime Minister of the United Kingdom twice, from 1940-45 and 1951-55. His leadership and oratory skills, and courage, helped in boosting the morale of the nation and defeat Germany. Churchill was also a noted artist and writer, having won the Nobel Prize for Literature.

Douglas MacArthur (U.S.A) – General and Supreme Commander of Allied Forces in the Pacific

Revolutionary, Prime Minister and President of Democratic Republic of Vietnam

Leader of the Soviet Union during the Second World War

President of the Republic of Korea

Politician, the founder of Pakistan

Revolutionary, founding father of the Republic of China

Chairman of the Palestine Liberation Organization

“When it comes to human dignity, we cannot make compromises.”

Angela Merkel is the first woman Chancellor of Germany. She is the party leader of Christian Democratic Union (CDU) and has been the Chancellor since 2005. Her role in bringing Germany out of recession, her foreign policy and campaign against global warming are particularly noteworthy. According to the Forbes magazine, she is ranked as the second most powerful person in the world (and the most powerful woman in the world).

Aung San Suu Kyi is noted for her struggle for freedom and pro-democracy government in Burma. She was under house arrest for more than 15 years (from 1989-2010). She is the chairperson of the National League for Democracy (NLD) in Burma. She is also the daughter of Aung San (Father of moder-day Burma). Aung San Suu Kyi received Nobel Peace Prize in 1991 for her efforts for complete freedom in Burma.

Cleopatra VII Philopator, or simply Cleopatra, was the most famous Egyptian Queen. Born in the Ptolemaic dynasty, she was the last Pharaoh of ancient Egypt. Cleopatra was a shrewd and ambitious ruler. She is noted for her beauty, for being lover of Julius Caesar and wife of Mark Antony. Cleopatra and Mark Antony were defeated by Octavian, and both committed suicide. She is the most popular female rulers in the world till date.

Eleanor Roosevelt was the First Lady of the United States of America (as a wife of President Franklin Roosevelt) for 12 years. She opposed her ceremonial First Lady role and actively advocated civil rights, held press conferences, participated in radio broadcasts, and authored daily columns. However, her most noteworthy achievement is that she chaired the UN Commission on Human Rights, that drafted the Universal Declaration of Human Rights.

Hatshepsut is recorded as the first-ever female ruler in the world. She was the Pharaoh of ancient Egypt for more than 20 years. Being a consort of Pharaoh Thutmose II, she ruled ancient Egypt after his death. Hatshepsut ordered building of several temples and constructions in Egypt, restored economy and also promoted trade. Interestingly, as it was unnatural for a female to rule at that time, she dressed like a male rule and behaved like a Pharaoh in every sense.

“Every moment wasted looking back, keeps us from moving forward.”

Hillary Rodham Clinton needs no introduction. From being the First Lady of the U.S.A (1993 – 2001) to the 67th United States Secretary of State, Mrs. Clinton has had an illustrious career. She is also the first First Lady to hold a national office. She has ranked twice in the list of 100 most influential lawyers in America. She was a candidate for Democratic presidential nomination in 2008 election in the U.S.

“People with clenched fists can not shake hands”

Indira Gandhi was the first woman Prime Minister of India, serving for 4 terms from 1966-77, and again from 1980 until her death in 1984. She was the daughter of Jawaharlal Nehru, the first Prime Minister of India. She is noted for creating the independent nation of Bangladesh, for conducting successful nuclear tests and for the Green Revolution in India. She was assassinated in 1984.

“Defeat? I do not recognize the meaning of the word.”

Margaret Thatcher is the first woman Prime Minister of the United Kingdom. She is also the longest serving British Prime Minister (11 years) in the 20th century. Baroness Thatcher restored the British economy and curbed the power of trade unions. She is particularly noted for winning the Falklands War and ending the Cold War. She is nicknamed as the Iron Lady.

“I have learned over the years that when one’s mind is made up, this diminishes fear; knowing what must be done does away with fear.”

Rosa Parks was an African-American civil rights activist who struggled against racial inequality in America. It began with her resistance to offer her seat in a bus to a white man. Parks worked alongside Martin Luther King, Jr., and other activists. She was awarded the Presidential Medal of Freedom and the Congressional Gold Medal for her efforts.

“A clear and innocent conscience fears nothing.”

Queen of the United Kingdom and Commonwealth realms

Now, there were also some leaders in the world like Adolf Hitler (Germany), Benito Mussolini (Italy), Saddam Hussein (Iraq), etc., who were autocratic and turned out to be dictators. Nevertheless, they are noted for their leadership skills.

This was only a short list of world leaders and rulers. As long as mankind survives, the world will continue to witness the rise and achievements of several great leaders.