The Most Important Inventions of the Sumerian Civilization

From writing to a system of time and mathematics, the world owes a lot to the numerous discoveries made by the ancient Sumerians. In this article, we shall study the various important inventions and achievements of the Sumerian civilization.

Home / Uncategorized / The Most Important Inventions of the Sumerian Civilization 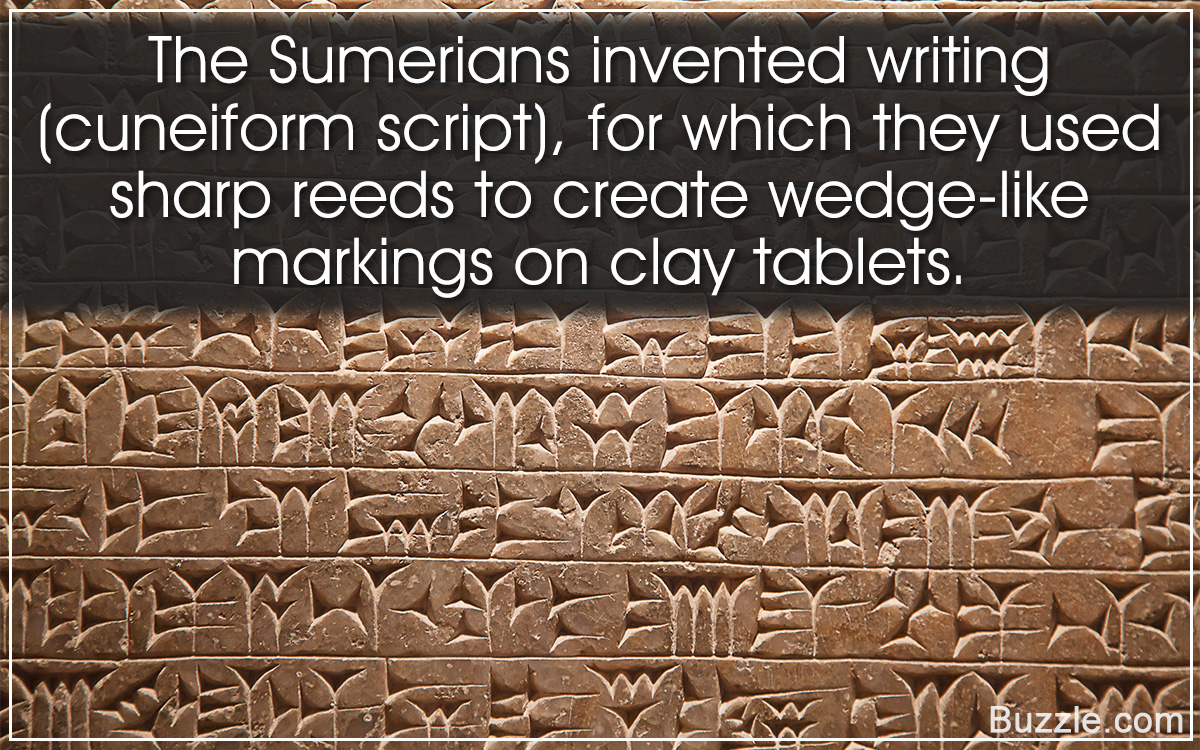 From writing to a system of time and mathematics, the world owes a lot to the numerous discoveries made by the ancient Sumerians. In this article, we shall study the various important inventions and achievements of the Sumerian civilization.

Although the ancient Sumerians are credited by most people for the invention of the wheel, this is not a universally accepted fact, as wheels from this period were also excavated in central Europe and northern Caucasus. It is a known fact, however, that the Sumerians were in fact the first to use wheeled vehicles, which revolutionized how humans traveled and transported goods from one place to another.

Sometime around 5000 BC, a civilization was formed in southern Mesopotamia. called Sumer, which means ‘land of the civilized kings’. It started with small fishing villages, agricultural towns, and a general populace who survived largely on hunting and food gathering. These people gradually settled near the rivers of Euphrates and Tigris, and created great cities that became flourishing centers of trade and commerce.

The Sumerians designed and invented numerous tools and systems to aid them in their daily life and to advance their civilization, some of which we even use today. In fact, their influence on today’s world is so high that we use their system of time, and some Sumerian words such as ‘saffron’ and ‘crocus’ have been adopted into the English language. Let us look at a list of the Sumerian inventions, and the importance each of them had.

Tools: Around 3000 BC, the Sumerians discovered bronze by mixing copper with tin, which lead to the inventions of common metal tools like chisels, hammers, etc.

Agriculture: Since Sumer was situated near the Tigris and Euphrates, they discovered rudimentary forms of irrigation, and also the first plows, which were no more than a stick which was pulled through the soil with a rope, that later evolved into bronze plows. They were also the first to use animals as labor for this purpose. With the formation of monarchical governance, irrigation was developed for large-scale use, and canals were built. These waterways also came in use for flood control.

Crafts: They were the first to create and use a potter’s wheel, which they used to create symmetrical clay products. This was also probably their inspiration to create the first wheel for transportation purposes. Experts consider this to be the ‘first known mechanical device’. They also developed glass and glaze to strengthen their pottery.

Transportation: The first sailboats were created in Sumer. They were used to import stones, metals, and timber from Asia Minor and Syria, by traveling the Euphrates and the Tigris rivers. It is thought that some of these boats might have even reached the Indus in India. They might have also been the first to make a wheel of solid wood. Remains and records of war chariots drawn by donkeys were found here by archaeologists.

Games: The game of checkers was first seen in Sumer, and was played by the people around 2500 BC.

Medicine: These Mesopotamians also advanced a lot in the medical field. They were possibly the first to use pills and creams to treat illnesses.

Uses: Mathematics was developed here around 5500 BC, as a response to their growing needs of governance. Taxes, measurement of areas of land, counting, and individuals property, etc., along with math for creating sky charts for navigation, and a detailed lunar calendar came under their first attempts of developing a mathematical system.

Numeral System: The ancient Sumerians were the first to create a numeral system around 3000 BC in a cuneiform style. Their numeral system was sexegesimal, i.e., it had a base number of 60. Similar to the modern decimal system, their numerals had the larger values to the left, with the symbol for 60 being the same as the symbol for 1. This system also was put in use to measure time in 60 seconds and minutes, as well as the 360 degrees of a circle. They were also the first to create an abacus, using the above system. Also, this was the first time symbols were used for transactions of trade.

Algebra and Geometry: Evidence of other math calculations, such as tables of multiplication, division, squares, square roots, cube roots, etc., were found dating around 2600 BC. Around 2000 BC, the Sumerians were adept at working algebra-like linear, cubic, and quadratic equations. There were also clay tablets which showed their skill in working complex geometric problems. 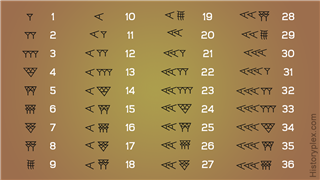 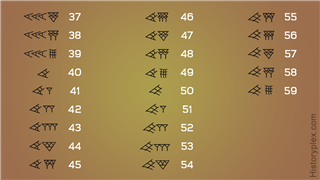 Religion in Sumer was largely polytheistic, containing a large number of man-like gods, who controlled the forces of nature such as the rain and the sun. When ancient Sumerians discovered that the stars and planets moved in a regular pattern across the sky, they felt it to be a secret code of the gods. Of this belief, astrology was born, which lead to extremely detailed astronomical and mathematical information.

Scribes and priests participated in studying the innards of sacrificial animals, to glean knowledge of the future, which indirectly helped in accelerating other practical research.

The Tower of Babel

Although debatable, it is highly probable that the Sumerians were the first to have a monarch type of government. The states of Sumer were ruled by a priest king, who ran the kingdom through a bureaucracy of officials, most of whom were priests. The duty of the king and his officials were to administer the military, trade, legal system, and performing important religious ceremonies. This kind of government overtook the tribal system of chieftains, and brought the various people of the kingdom together.

Construction of Ziggurat by Sumerian Architects

The formation of a bureaucracy to rule the entire kingdom meant that the priests had a lot of responsibilities, pertaining to production and distribution of food, legal disputes, etc., and some form of record-keeping was necessary. Hence, writing was born. The oldest writings of the ancient Sumerians were records of distributing goods written on stone or clay tablets. The writings were in pictographs, i.e., they were rough sketches of the goods that were distributed. Eventually, to make their writing more efficient, they developed cuneiform style shorthand writing, which consisted of drawing wedged lines on the tablets, using a sharp reed on wet clay. Cuneiform writing was used for thousands of years, making it the longest used form of writing till date.

Sumerian Pictograph Writing Before the Invention of Cuneiform

It is important to note that the Sumerians were the first to create a code of law. Let us look at the characteristics of this system.

The Code of King Hammurabi

Hammurabi was a Sumerian King, who is known for creating the largest of Sumerian law codes. The code was written on a 6-feet tall stone slab, with a carving of the king receiving the set of laws from the sun god. The characteristics of this code are:

Art and Sculpture of Sumer

Art and Sculpture of Sumer

The legacy of this great civilization is still felt in waves across the modern world. Three important Sumerian inventions – written communication, wheeled transportation, and their number system based on 60 for measuring time and other geometric objects, are highly relevant today. Besides these, the modern world owes the Sumerians urbanization, animal husbandry, astronomy, agricultural developments, wind power, and literature, which contributed to Hebrew scriptures, and the Christian Old Testament, making their civilization probably the most important one for mankind, till date. 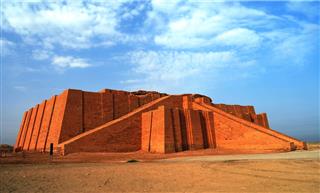 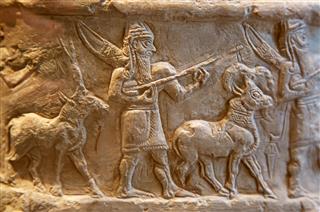 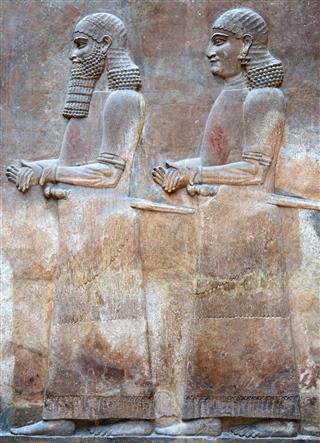 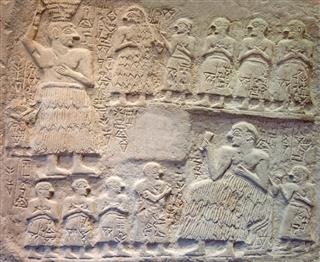