The colors of the flag of Ireland have historic relevance and significance. Scroll down to know what do the flag colors signify.

The colors of the flag of Ireland have historic relevance and significance. Scroll down to know what do the flag colors signify.

The current flag of Ireland was adopted in 1919, during the Irish War of Independence, although it was first used in 1848. The proportion of the flag is 1:2, which means the length is twice the width. It is called the ‘Irish tricolor’ and has vertical stripes of three colors. The colors are green, white, and orange. Their placement on the flag also holds significance. The flag has green color at the hoist, next to the green is white, and at the end is orange. All the stripes are of equal size.

Officially, the colors on the flag don’t mean anything. However, you will come across a number of common interpretations. First among them is that green signifies Catholic majority, while orange represents the Protestant minority. The peace and unity between the Catholics and the Protestants is represented by the white strip that stands between the green and the orange color.

Another interpretation is that green stands for the Gaelic and Anglo-Norman tradition that existed in Ireland, whereas orange stands for the supporters of William of Orange. Like mentioned in the previously, the white in between the green and the orange symbolizes the everlasting truce between the ‘Green’ and the ‘Orange’.

Ireland was predominantly a Catholic country. William of Orange, the King of England, Scotland, and Ireland defeated the deposed King James II, in the Battle of the Boyne, near Dublin. The King of England was a Protestant, on the other hand King James II was a Catholic. With the victory of King William of England, he was able to secure Protestant dominance over the island. There is also an interesting story of why the King was called William of Orange. The title came from the Principality of Orange, located in Southern France, which has been a Protestant principality since the 1500s. When the battle of independence started, the color orange was included in the flag, to reconcile the Orange supporters of Ireland into the fold.

Like the use of orange has significance in history, there is also significance associated with the color green. The color green, in most interpretations stands for the natives of Ireland, also represents the Irish shamrocks and verdant landscapes seen in Ireland. Along with these meanings, it also symbolizes the green revolution. Previously, the Irish flag had the color green as background on which was a golden harp. This flag was used from 1798 till the early twentieth century. Hence, green was also included in the flag.

The Irish tricolor was unfurled by militant nationalist Thomas Francis Meagher in 1848; however, the stripes in the flag were arranged in a different order. Although the flag was designed in mid 1800s, it was adopted only in 1919, during the Irish War of Independence from Britain. In some flags, the color yellow is used in place of orange. However, it is a misinterpretation, therefore, it is actively discouraged. At the same time, if the color is worn out, then the flag has to be replaced, and the Irish flag should look like green at the flag staff, with white in between and orange towards the end with the vertical stripes in equal size. 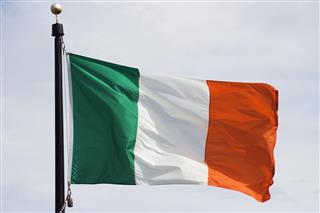 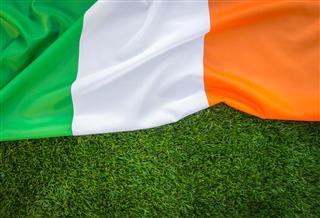 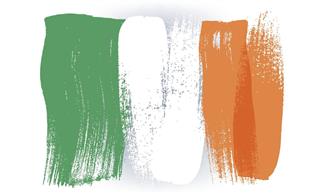