The treaty of Greenville was an important event in the history of the United States, towards resolving the continuous conflict between the tribes of American Indians in the Great Lakes region and the European-American government. In this Historyplex article, we will study the event and its effects on the relations between the settlers and the indigenous tribes. 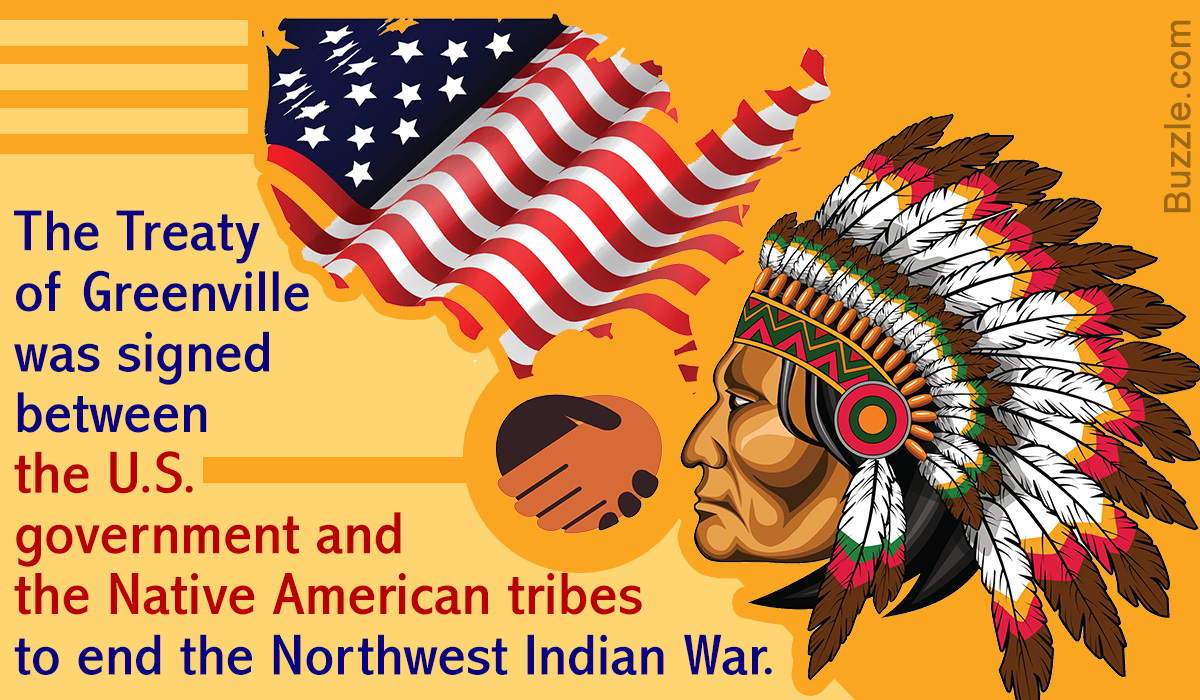 The treaty of Greenville was an important event in the history of the United States, towards resolving the continuous conflict between the tribes of American Indians in the Great Lakes region and the European-American government. In this Historyplex article, we will study the event and its effects on the relations between the settlers and the indigenous tribes.

Quick Fact
Native American tribes achieved many victories over the forces of the United States army in 1790 an 1791, with complete annihilation of the invading soldiers, shocking President George Washington. These victories made the Indians overconfident of their abilities, and they compared themselves to gods, which finally led to their defeat in 1794.

During the 18th century, a number of Native American tribes with different cultural backgrounds and languages lived to the north of the Ohio river in the Great Lakes region. They had maintained a good fur trade relationship with the British, and even supported them against the American colonies during the American Revolution war.

After the colonies won their independence, treaties were signed with many Indian tribes, in which the Natives were forced to cede a lot of their land north of the Ohio river, because they had supported the British. This created a lot of hostility in the Indians towards the American establishment. In July 1787, the American Confederation passed the Northwest Ordinance, which created plans to settle around five states, namely Ohio, Wisconsin, Illinois, Indiana, and Michigan, in the area north of the Ohio river. The tribes saw this as an intrusion of their land, which resulted in many violent altercations. They came together to form the Western Confederacy, to fight and retain their lands.

On the 20th of August, 1794, American army commander Anthony Wayne and his forces decisively defeated the Native tribes led by Blue Jacket of the Shawnee tribe at the Battle of Fallen Timbers. With this defeat, the Indians were forced to agree for peace. In January 1795, the leaders of all the western tribes came to Fort Greenville to negotiate a treaty with Anthony Wayne. The terms of the treaty were debated for the next seven months, and finalized on the 3rd of August. Let’s see what the general elements of the Treaty of Greenville were.

On the 3rd of August 1795, Leaders from the Delaware, Wyandot, Ottawa, Miami, Chippewa, Shawnee, Kickapoo, Kaskaskia, Piankashaw, Potawatomi, Wea, and Eel River Indian tribes officially signed the treaty. According to this treaty, the Indians agreed to let go of all land beyond a boundary that started to the south and east part of Lake Erie near the Western Connecticut Reserve, in present day Cleveland, and ran south towards Fort Laurens, then turned westward to Fort Recovery, and then turned south to the Ohio river. However, the Indians would still be allowed to hunt in this area. On the other hand, the settlers agreed to give up any claim to the land that was to the north and west of this line. The Native tribes also had to agree to let the settlers build outposts in the Indian area. Also, prisoners on both sides were to be returned.

The United States government provided goods worth USD 20,000 upon signing the treaty, and agreed to pay USD 9,500 worth of goods each year from the date onwards. The tribes were to decide how they would distribute these goods amongst themselves. The treaty was renewed and amended in 1814 to get the support of the tribes against the British in the War of 1812. Let us now look what the Treaty of Greenville did, and how the balance of power was shifted from the local tribes to the newly emergent power of the US government.

The Treaty of Greenville was important because it established a set boundary of the lands of the Native Americans and the land open for European settlements, known as the ‘Greenville Treaty Line’. For the first time the new United States government had control over all its territories. The treaty ended the Northwest Indian War.

The Native tribes officially surrendered two-thirds of the land between Lake Erie and the Ohio river to the white settlers as a result of the Treaty of Greenville. In exchange, they received clothing, utensils, and animals worth USD 20,000.

Despite this treaty, the settlers continued to encroach on the land of the tribes over the years, and violence would continue. Native American leaders, such as Tecumseh and the Prophet, would continue to make attempts to regain their lost land well into the 1800s. However, in the following years, the settlers outnumbered the Indian tribes, and ended up taking over their entire land after discarding the treaty and opening the Northwest region for settlement.