An In-depth Understanding of Material and Non-material Culture

Importance of Material Culture in Anthropology

Anthropology is the study of human societies and their culture. Material culture exhibits the lifestyle of a society, and tells about its development in science, technology, architecture, medicine, etc.

A culture is both, an assimilation of people, facts, thoughts, visionaries, language, art, etc. Non-material culture comes from the thoughts, conventions, teachings, prayers, and traditions of any organization. On the other hand, material culture can be defined as something that speaks about the ‘material’ belongings of a society. Any culture is influenced by various factors, such as geographical conditions, natural resources available, history and tradition, neighboring cultures, etc.

For example, what do the excavations of the Indus valley exhibit? The remains of Harappa and Mohenjo-daro tells about the development of the architecture and sewage system, their advanced development in the science of measurements, etc.

Material culture refers to that part of a culture which is represented by clothing, attire, food, artifacts, architecture, technology, etc.

Food is one of the basic elements of any culture, and also something that helps distinguish different cultures from each other. Every culture has its own special cuisine to boast of. Be it Chinese fried rice, Italian pizza, Indian samosa, etc., all cultures have their own food habits and liking’s. These habits are mostly influenced by climate, natural resources, etc. For example, coastal regions will have more use of coconut in their food items.

Egyptian Culture: the Pyramids of Giza represent the material culture of the Egyptians.

Romanesque architecture of European countries, which was popular in the Medieval period, was symbolized by stylized arches.

Renaissance in Art: There were brief changes in architecture and furniture too. For example, the art nouveau and the art deco culture, that brought a revolution in architecture, furniture, and interior decoration in some European countries such as Italy, Austria, etc., and America, too.

The Impressionist style of Paris, though, it was subject to severe criticism by the conventional art connoisseurs.

On the other hand, there was the Pop Art movement in Britain and U.S. around the late 1950s. This art movement was symbolized by the use of bright colors.

Traditional Japanese attire is the kimono, the Chinese have the hanfu, whereas, the traditional attire of Indians is the sari, dhoti, etc. Of course, with changes in culture due to migration and exchange, many of them have adopted the Western clothing style. There are differences in culture that can be exhibited. For example, in some cultures, women are not allowed to keep their hair open.

Non-material culture can be defined as the way of thinking and faith system of any culture. The following examples will help you understand it better.

➜ In U.S. culture, freedom is the essence of living. They want their own choice of living, to follow the faith of their choice, choose their profession, enter into markets, etc. Even the social freedom in the U.S. is much more as compared to some nations that are ruled by traditions.
➜ Certain things are considered taboo or bad luck in certain countries. In some nations, pre-marriage sex and having a child out-of-wedlock is considered taboo. Polygamy is illegal in most countries of the world, however, it still practiced and is legal in a few parts of Central Asia, Africa, etc. Most cultures in the world have not accepted homosexuality, and the struggle is still on for their rights.
➜ There are certain food restrictions too, such as, in some cultures, consuming pork is prohibited, etc.
➜ Norms and symbols are different in different cultures. Certain gestures may be considered offensive in some nations, while they might have positive interpretations in other nations. Therefore, while traveling, you’ve got to be extra careful with the gestures you choose to make.
➜ In certain cultures, you’re not allowed to wear footwear inside places of worship.
➜ In some nations, caste and social discrimination is so rampant that inter-caste marriages are not allowed.
➜ There is a profound change today in overall culture. Contraception, abortion, and family planning techniques were not accepted, until recently.
➜ Nuclear families have replaced the traditional joint family system in many places.

Difference Between Material and Non-material Culture

The difference between material and non-material culture is exhibited through the above mentioned examples. Material culture will tell about the art, architecture, science, attire, food, etc., of a particular group of people. However, non-material culture gives us what their thoughts, actions, feelings, and faith system preaches. It is a way of living. However, both are dependent on each other, and they shape each other. Of course, change is the constant thing in life, and with time, both material and non-material cultures change, mostly due to the influence of other cultures. With the development in technology, transport, and communication, there is lot of blending of cultures. And of course, many countries are influenced by Western culture.

Some witty comments about our modern culture of fast-food, obsession of being thin, and an emotionally void culture.

“Experts in ancient Greek culture say that people back then didn’t see their thoughts as belonging to them. When ancient Greeks had a thought, it occurred to them as a god or goddess giving an order. Apollo was telling them to be brave. Athena was telling them to fall in love. Now people hear a commercial for sour cream potato chips and rush out to buy, but now they call this free will. At least the ancient Greeks were being honest.“
― Chuck Palahniuk, Lullaby

“Our culture has filled our heads but emptied our hearts, stuffed our wallets but starved our wonder. It has fed our thirst for facts but not for meaning or mystery. It produces ‘nice’ people, not heroes.“
― Peter Kreeft, Jesus-Shock

Modern culture has certainly given us more freedom, yet, there are some things of our material and non-material culture that we need to preserve in order for our future generations to be able to know about our history. 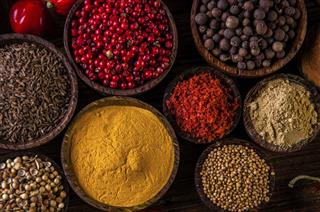 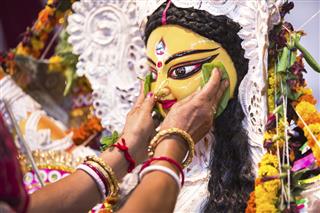 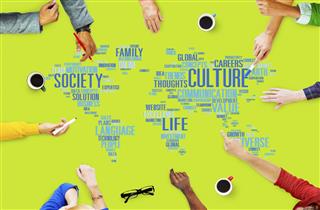