The Logan Act is a federal statute which disallows American citizens from negotiating with officials of foreign governments on behalf of the united States, without being officially authorized for such a task. This Historyplex write-up reveals more... 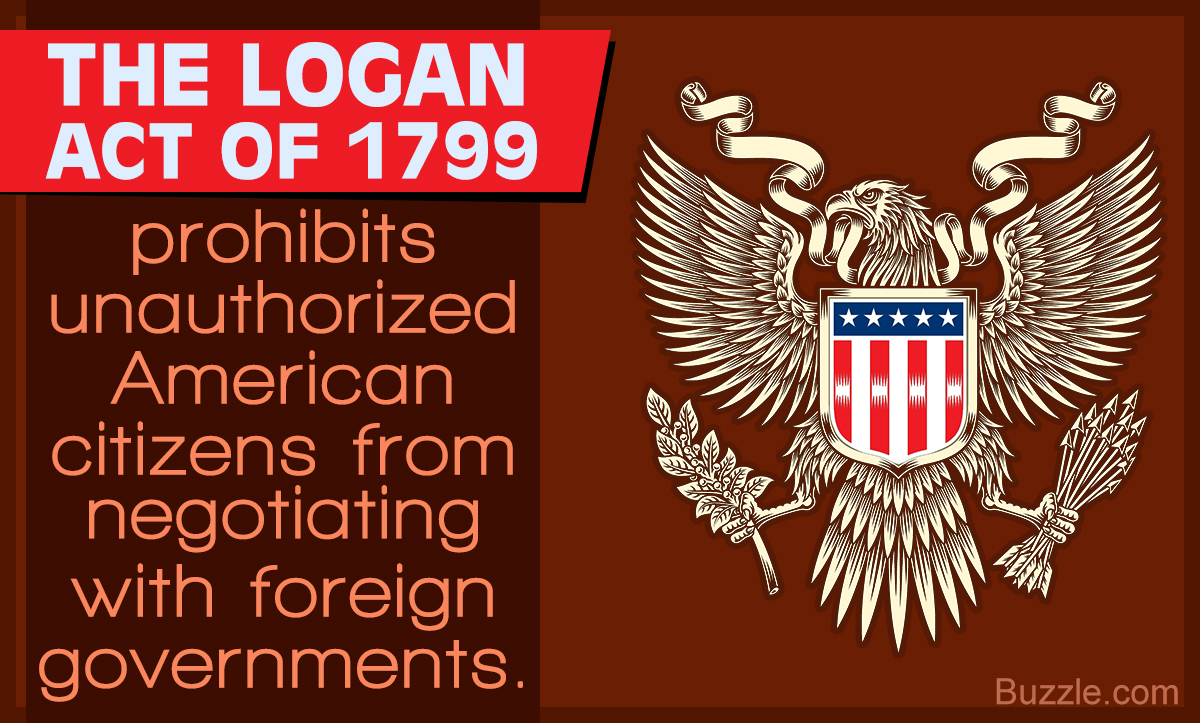 The Logan Act is a federal statute which disallows American citizens from negotiating with officials of foreign governments on behalf of the united States, without being officially authorized for such a task. This Historyplex write-up reveals more…

Under the Logan Act, any American who attempts to negotiate or influence foreign policy without being authorized by the executive branch of the US government is committing a felony. This law was first passed in 1799, after Pennsylvania legislator George Logan influenced the relations of the United States with France without any authority to do so. The law was passed to establish a clear hierarchy of communication, and to prevent people without authority from interfering in disputes between the US and other nations during stressful times. It is widely accepted that only the president or someone authorized by the president can speak for and represent the United States of America.

Why Was the Act Passed?

The relationship between the United States and France was tense in 1798 under the presidency of John Adams. With the intention of ironing things out between the two nations, the state legislator of Pennsylvania Dr. George Logan entered into negotiations with France. Within a few days of the meeting between Logan and French officials, France undertook several steps to ease the tension between the two countries, including lifting embargoes against the United States and releasing American seamen from French jails.

Despite the success of Logan’s mission, the federalist Party in Congress was not amicable to the praise that fell on the Pennsylvania legislator, and they pushed for a law that would stop such individual interference in between the United States and other nations. So, the Logan Act of 1799 was passed in response to this through both houses of Congress, along with the approval of President John Adams.

“This section shall not abridge the right of a citizen to apply himself, or his agent, to any foreign government, or the agents thereof, for redress of any injury which he may have sustained from such government or any of its agents or subjects.”

Meaning: No citizen of the United States can legally carry out any communication with a foreign government to influence foreign policies without the official approval of the president. Any person violating this law can be accused of treason, and be fined and/or jailed for up to three years. The Supreme Court ruled that only the president or someone he has authorized has the power to represent the nation internationally. Although he must seek the advice of the Senate, he alone will make all the negotiations. Congress and the Senate cannot intrude in these negotiations.

However, this Act does not infringe on the rights of a citizen to apply itself to the foreign government or its officials to settle any personal disputes with the foreign nation or any citizen from that country.

Recent Violations of the Act

It was alleged that Barack Obama had violated the Logan Act while visiting Iraq, as he attempted to negotiate the delay of troop withdrawal from that region, while George Bush was still president. While these charges had been investigated, nothing came out of it, and the allegations remain unsubstantiated.

Early in 2015, House GOP leader John Boehner was accused of trying to influence the country towards the situation in Israel, by asking Israeli Prime Minister Benjamin Netanyahu to address a joint session of Congress just before the Israeli elections. The legality of the law is still under scrutiny due to this incident.

The Logan Act can be used to discipline those who seek to overstep their authority, and can be important in preventing any potentially destructive misunderstandings between the United States of America and the other nations of the world.