What Weapons Were Used in World War I?

World War 1 was one of the largest and most violent events of the conflict in the history of mankind. This war brought in many new technologies and deadly weapons, that have influenced warfare strategies and weapons development till the present date. In this article, we shall look at the most used weapons in World War 1, with pictures for better understanding.

Home / Uncategorized / What Weapons Were Used in World War I?

World War 1 was one of the largest and most violent events of the conflict in the history of mankind. This war brought in many new technologies and deadly weapons, that have influenced warfare strategies and weapons development till the present date. In this article, we shall look at the most used weapons in World War 1, with pictures for better understanding.

The first tracer bullet .303 SPG Mark VIIG became very popular upon its inception in 1916. This British invention had an unexpected side effect of igniting hydrogen, which made it a weapon of choice for the British soldiers against the hydrogen-inflated German Zeppelins that were bombing England.

At the beginning of the First World War, the great powers of Europe thought that the conflict would only be limited to cavalry battles and small-scale skirmishes, similar to wars in the past. However, in the hundred years of peace preceding the war, Europe had developed technologies to create sophisticated and destructive weapons of war. Everyone soon realized that this conflict would be more deadlier than any before it. With the advent of trench warfare, it became a long war of attrition, that lasted for more than 4 years, and took millions of lives. Military development took place in several fields, like in personal weaponry, grenades, artillery, toxic gas, and new inventions such as tanks, warplanes, and submarines. Let’s check out the World War 1 weapons in some detail.

The preferred fighting method for both sides in the conflict was trench warfare, due to which grenades were used more than ever before. This led to many changes and improvements throughout the duration of the war. Both sides started mostly with grenades that used impact fuses. However, these weapons were not suitable for trenches, as the soldiers would sometimes strike the sides of the trenches with the grenade while attempting to throw it, resulting in detonation and death of the user itself. This meant that by the end of the war, grenades which had timing fuses were preferred over those with impact fuses.

The most popular British grenades were the ball grenades, double-cylinder grenades, and the Mills bomb, all of which detonated over 5 – 9 seconds after ignition. Similarly, the French soldiers used the F1 defensive grenade. On the other side, the Germans used an impact detonation discus/turtle shell grenade, and a timing detonation black powder hand grenade. The Germans also used a rifle-propelled grenade, and the British responded with the stokes mortar that had an indirect firing system.

Soldiers on both sides primarily made use of bolt action rifles, which could hold up to 15 rounds, and were capable of firing at targets located around 1 mile away. However, there were also a few automatic versions available. The Lee-Enfield rifles were the most used guns by the British, while the Gewehr 98 Mauser rifles were widely used by the Germans. The French used both, Lebel and Berthier rifles. Some troops were also provided with carbine guns. These guns also came with varying bayonets and knives, that could be used in close-quarter combat. Pistols such as the M1911 and the Luger were used by the American and German forces, respectively. However, pistols and revolvers were used mostly by officers, and were not available to all soldiers.

Besides these, machine and sub-machine guns were also brought to use. The MP18 sub-machine and the Lewis gun were easily portable, and found widespread use on both sides. The Vickers machine gun, the Maxim heavy-machine gun, and its German counterpart, the MG 08 were extremely powerful, easily providing the firepower of around 100 guns, by shooting 400 – 500 bullets every minute. These were very effective in stopping an infantry charge in its tracks. On the other hand, these huge guns were not easily movable, and had to be used from a single position, before dismantling and moving them to another location. Also, they needed around 5 men to operate, and would only work effectively if placed on a flat surface. Flamethrowers were also used initially, but due to the risk of hurting friendlies, they were abandoned pretty soon.

There were many new weapons used in World War 1. Of these, toxic chemical gases were arguably the most deadly. Poisonous gases were deployed for the first time in World War 1, through artillery shells and canisters. The Germans began by deploying chlorine gas canisters over enemy lines, in 1915, and causing severe disability and death in soldiers, which was retaliated in a similar way by the British and the French. Even deadlier gases, such as phosgene and severe forms of tear gas were experimented with. However, the deadliest of these was mustard gas, which caused severe chemical burns, internal and external bleeding, and a long, painful death. It was practically undetectable, making it incredibly effective.

Because of the chemical weapons used in World War 1, both sides created protective equipment for their troops. However, these were not always effective against gas attacks. More than 200,000 soldiers were victims to this form of warfare, causing psychological distress, where even symptoms of cold and flu resulted in the fear of being under attack by gas.

Trench warfare was often about which army outlasted the other. This often led to trench raids, in which one side would jump out of their trenches, race over no-mans land to the enemies trench to begin close-quarter combat. To counter this, soldiers would place barbed wires across no-mans lands, which would make it difficult for charging soldiers to cover ground easily. Many troops would often get stuck in these traps, which made them very vulnerable to enemy fire. Also, due to the use of snipers, the attack was doubly difficult. This type of warfare created huge problems, as capturing a small part of enemy territory took months. In close-quarter combat, soldiers used a variety of weapons, such as billhooks, brass knuckles, trench spades, hatchets, improvised maces, machetes, push daggers, trench knives, etc. 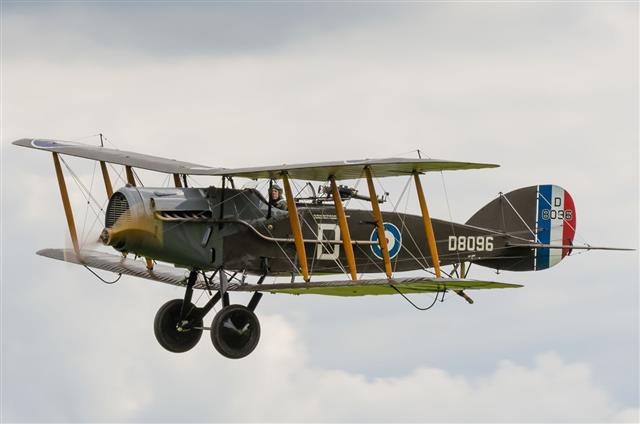 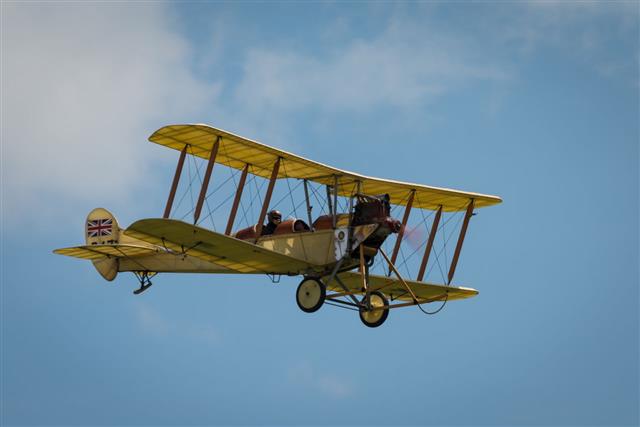 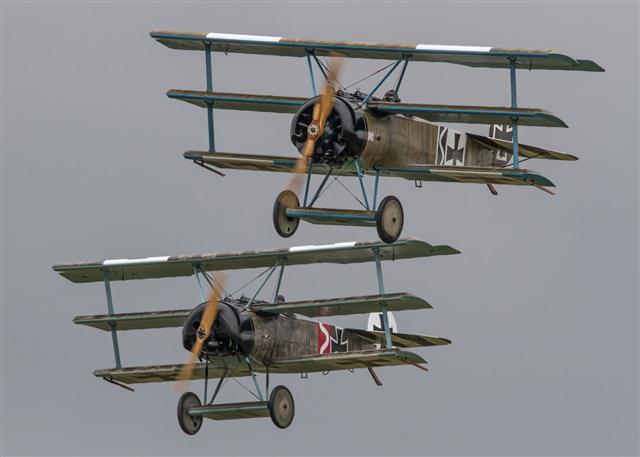 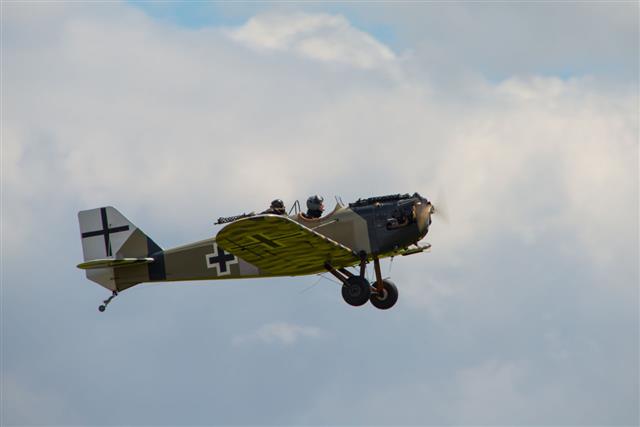 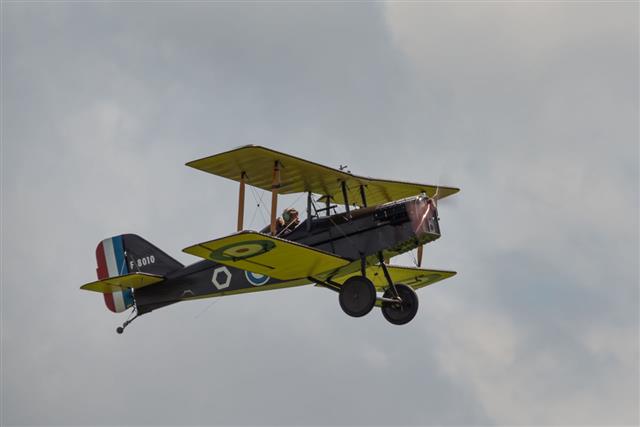 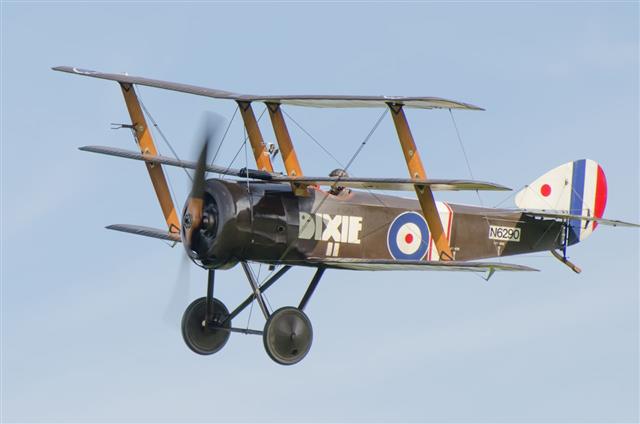 In the beginning of World War I, airplanes were used mainly for reconnaissance, and only the Zeppelins were used by the Germans to bomb enemy cities. However, with quick technological advancements, airplanes were equipped with machine guns and bombs, leading to aerial attacks on ground targets, with bombs as well as bullets. The planes also engaged in intense dogfights every now and then. However, airplanes were still used primarily to patrol sea coasts, stopping artillery, and intelligence gathering. This speedy development of aircraft was responded on both sides with the invention of anti-aircraft guns. By the end of the war, the Germans completely stopped the use of Zeppelins, because they were easily shot down by the enemy. The Sopwith Camels of the British and the Fokker aircraft of the Germans were among the most widely used models in this war.

The technological advancements made to artillery in the early 19th century helped both, France and Britain to gain an impressive arsenal. However, due to the spread of trench warfare, siege guns were most commonly used in the battlefield to destroy fortified enemy locations. Most of these guns did not suit the rapid movements of troops, and were slow in mobilizing from one place to another because of their huge size and weight. The Paris Guns were the biggest guns of the war, developed by the Germans to bomb Paris from over 75 miles away. However, these guns easily wore out, and were mainly used for their shock value, rather than causing any significant damage.

Factories had to create thousands of shells for field artillery, as these guns could easily fire over a hundred shells each day, from one location over a period of many days. Various modifications to the Howitzer canons were widely used in the war, each of which required over 12 men to operate. Despite all this, of all the types of weapons used in the war, the attack of artillery took the most lives during the conflict. Around 2 million shells were fired by Britain and France, and an almost equal number was fired by Germany, making the artillery canons one of the most used weapons in World War I.

Initially known as ‘landships’, the first tank was invented by the British Royal Navy. Tanks on both sides of the war were huge machines, that initially scared soldiers into fleeing their posts. Although initially successful in gaining victories, these tanks were rather slow (top speed of approx. 5 mph) and difficult to maneuver, not even being able to cross trenches or steep inclines. This eventually made it easier for the German artillery to defeat them. However, these tanks were the stepping stones in creating much better models, which were later used in World War II, where they were used in tandem with ground attack aircraft.

Warships were greatly developed by the navies of both sides. During the war, this started an arms race of creating more battleships than each other. The British Empire eventually ended up having more ships than Germany. However, the Germans created a huge fleet of submarines, that created a menace for the French and British navies. In a bid to further their stranglehold, the Germans resorted to torpedoing even civilian ships which were suspected of carrying supplies for the enemy. This cost the Germans all public sympathy, and was one of the reasons why the U.S. joined the war.

Another relatively new concept was the widespread use of naval mines. Besides the contact-detonation variety, even proximity mines were used for the first time in the seas. Eventually, the Allies set up enough naval mines to block the Germans in the North Sea.

The race to get better weapons led to several interesting inventions during World War I, such as sanitary napkins, mobile X-ray machines, pilot-less reconnaissance drones, aircraft carriers, hydrophones, air traffic control, and depth charges, which have been used since with great success till the present day.